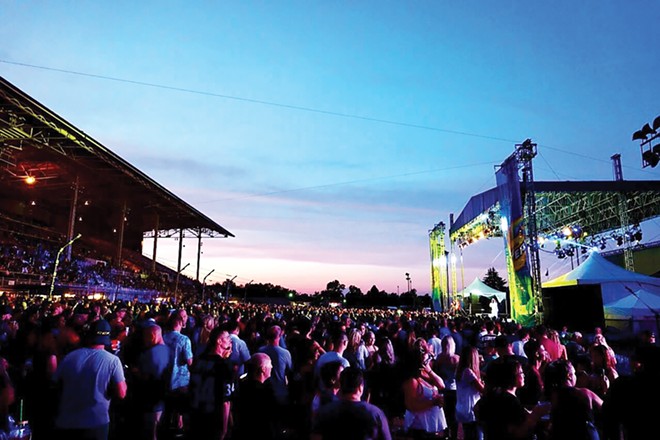 Greetings, music friends and fans! Welcome to the column that normally would be all about the Illinois State Fair, but since there is no fair in 2020, we can reminisce some and ruminate upon the state of the state fair. Does that sound fair to you? I will do my best to avoid using all the variations and definitions of the word "fair" and its grammatically correct relations that allow it to be an adjective, adverb, noun and verb, but it just wouldn't be fair to the punny side of the street to not attempt a fair amount of flitting at the multi-purpose word. So as we're not feeling fine about the cancellation of the fair and not even feeling fair-to-middling on the subject, perhaps we can add some fairings to this column and move it along faster and there will be no fare involved. Fair enough?

The big daddy of entertainment at the state fair was, is and always will be the Grandstand shows. You can find a list of all Grandstand acts from 1946 to 2016 at the website of the Illinois State Fair Museum Foundation, making for a veritable history of American show business. The WLS Barn Dance featuring Roy Rogers and Trigger was here in 1946, along with "10 most-famous barber shop quartets," among other exciting acts. In my opinion, highlights through the decades include Louis Armstrong in 1958, The Three Stooges in 1960, the Dick Clark Show in 1962 and the Smothers Brothers, the Osmond Brothers, the Brooks Sisters and the Johnson Sisters, all in 1964.

I've heard stories about 1968, when The Who, in a seemingly mismatched package show, opened for The Association. In 1969, Iron Butterfly played, and if eye-witness reports are true, their drummer passed out after a 23-minute drum solo in the central Illinois summertime humidity. 1971 brought us Merle Haggard, Red Skelton, Guess Who, Doc Severinson, Pat Boone, Jerry Lee Lewis and more, for a banner year. Jumping to 1974, jazz and instrumental music made an appearance with Dave Bruebeck and Herbie Mann, plus Herb Alpert & The Tijuana Brass Band, along with a disappointed bunch of top-40 rockers when Bachman-Turner Overdrive cancelled. 1977 was a fantastic year with KC and the Sunshine Band, Johnny Cash, Bob Seger and the Bay City Rollers, plus Captain and Tennille, Marilyn McCoo and Billy Davis Jr., Charley Pride, England Dan and John Ford Coley, all topped off with the great Glen Campbell. The list goes on and on, but you get the idea of the incredible roster of artists that came every summer to entertain fairgoers.

My personal claim to fame on the Grandstand stage comes from opening up for Willie Nelson and Family in 2001 with my friends and bandmates, as Tom Irwin and the Hired Hands. Then, as the original bass player in Mr. Opporknockity, with more friends and bandmates, we opened up for Journey in 2002. My favorite story there is the telling contrast of Willie and Journey, as the Family band welcomed us with open arms in the green room, but the Journey bunch escorted us all out before the boys in the band from the Bay would even enter the room.

I'm not out of fair stories, but I am out of space so, next week I shall regale you with more fair-eee tales. Be sure to check out all the venues that are still open and hosting fairly fair-like fare at their festive establishments. Also be safe, follow protocols and be thankful for all those helping us get through these crazy times of the pandemic.