Vendors, restaurants and hotels are counting on fairgoers to return 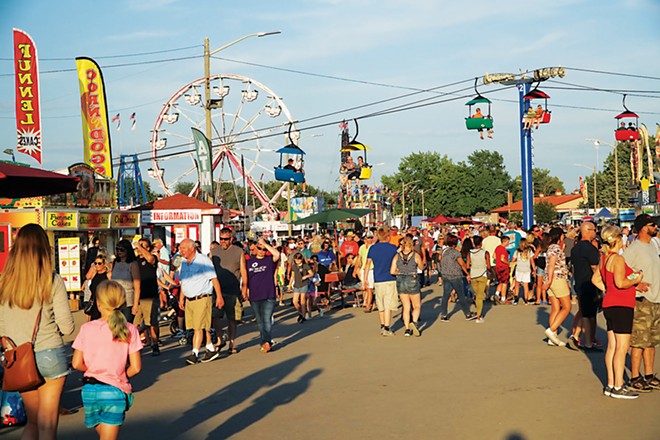 PHOTO BY LEE MILNER
An estimated 509,000 people attended the 2019 fair, the highest attendance since 2014, and organizers are hoping for a similar turnout this year.

The Illinois State Fair is back this year with the theme of One Illinois, designed to emphasize a need for unity during the pandemic's challenges. Krista Lisser, Illinois Department of Agriculture's public information officer, said that the fair's organizers expect a similar attendance to previous years, despite the ongoing COVID-19 pandemic. An estimated 509,000 people attended the 2019 fair, which was the highest attendance since 2014, Lisser said. Fair organizers typically expect anywhere between 450,000 to 500,000 attendees each year.

"There's a lot to live up to for 2021, but we think that people are ready to get out and go and enjoy themselves again and experience the fair," Lisser said. "We do have a similar expectation for attendance this year. I think it's something a lot of people missed in 2020."

Masks will be provided at the Grandstand entrance and at other locations. Unvaccinated people are encouraged to wear masks at all times on the fairgrounds. Masks are also encouraged for all attendees of the Twilight Parade. Additionally, carnival workers, vendors and concession stand workers are required to wear masks. 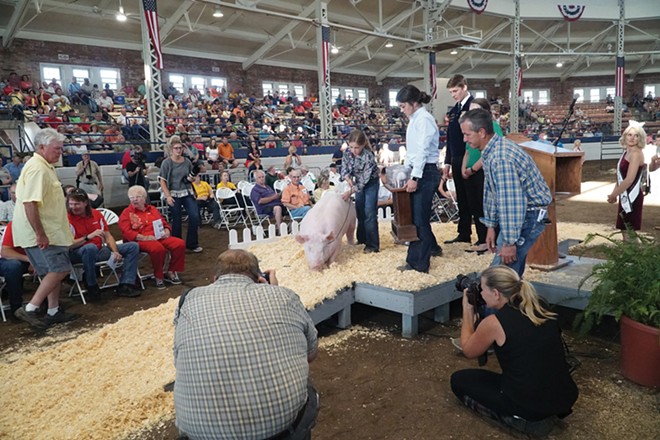 PHOTO BY LEE MILNER, 2019
Animal exhibitions will return to the fair this year. In 2020, 4-H held virtual animal showings after the Illinois and Du Quoin State Fair were both canceled.

There will be six vaccination stations located across the fair, and Jerry Costello II, director of the Illinois Department of Agriculture, said it is Americans' "civic duty" to get vaccinated to protect the community. The lieutenant governor's tent will include a Vax Up, Mask Up and Bag Up Food Drive where fairgoers who are concerned about Illinois' growing food insecurity crisis can donate pasta, peanut butter, crackers and other nonperishable food items.

"Visit Springfield has seen an influx of visitors during the Illinois State Fair weekend at our Visitors Center in the Lincoln-Herndon Law Office since opening in 2018," said Scott Dahl, director of Visit Springfield. "I think this shows travelers may come for the state fair, but also experience Springfield as a whole, including Lincoln and Route 66."

Dahl said he encourages fairgoers to check out the Route 66 Experience, which is debuting at this year's fair. This attraction, located at Gate 2, will be in its first phase when it opens Aug. 12. Its projected completion date is in 2026, prior to the centennial of Route 66.

"We're actually the only fairgrounds in the United States located on Route 66," Lisser noted. The setup will include a microform of the route from Chicago to the Chain of Rocks Bridge over the Mississippi river, showcasing communities and landmarks along the way. The experience will offer QR codes and storyboards that will detail historical attractions and businesses along the route. Communities along the Illinois Route 66 Scenic Byway have been invited to participate and will add information about attractions in their area.

State fair organizers are providing a number of new offerings this year, but they have also had to replace two Grandstand performers who decided to skip this year's fair. Although Staind and Kelsea Ballerini both canceled their Grandstand shows, the fair will still feature 13 different Grandstand acts, one more than was offered in 2018. Prior to 2019, the first day of the state fair did not have a concert, but a Thursday, Aug. 12, Grandstand performance by Sammy Hagar and The Circle has been announced for this year after 2019's free Thursday show was so successful.

The Grandstand isn't suffering from a loss of performers, but there is a shortage of vendors and seasonal workers this year, much like employment shortages that have become common all across the country. Those who are interested in seasonal work at the fairgrounds can still apply online through Aug. 16. 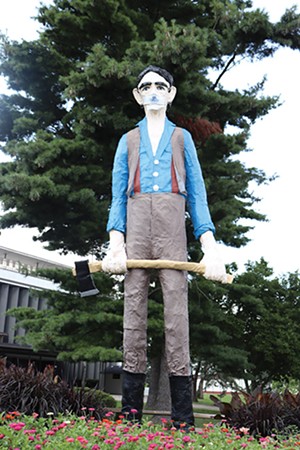 Photo by Meredith Howard
"The Rail Splitter," a statue of Abraham Lincoln in front of the Illinois Expo Building, has been masked as a reminder of COVID precautions.

"We have been able to make some of that up here in the homestretch, to be able to hire some folks, but we did have a harder time during the summer filling those staffing needs," said Lisser. "Of course, even though we've had a little bit of a hard time, that is not going to affect how we conduct the fair, and it won't affect the cleanliness that we are going to step up this year."

New at the fair: Esports, drones and more

Another reason to visit the fairgrounds this year is the debut of the Tech Prairie STEAM Expo from Aug. 18 to 22 in the Orr Building. The expo's main events will be a drone competition and Esports events.

The drone competition, which will be held Aug. 20, is being organized by the Central Illinois Drone Racers, who will award prizes to the winners. The contest will be held in the multipurpose arena. There is no registration fee to enter, and pilots 10 years of age or older are welcome to participate.

The Esports competition will consist of four games, and prize money will be awarded in each game and age category. That portion of the expo is hosted by University of Illinois 4-H Extension. The expo will take place during the second half of the fair and will include a flight simulator, virtual reality opportunities, health sciences stations, aerospace exhibits and the Hip Hop Xpress Bus. In addition, Southerwestern Illinois College will introduce fairgoers to Computer Numerical Control (CNC) machining, where they will have the opportunity to design a nameplate using Mastercam programming software.

There will also be more free shows this year, including Dino-Roar, an educational exhibition for children featuring an animatronic T-Rex and a fossil display. According to Lisser, visitors can expect new rides this year, due to the fair utilizing a new carnival vendor.

The butter cow, a fan favorite, is celebrating its 100th anniversary this year. Illinois Times is hosting a create-your-own miniature butter cow contest again this year with categories for children and adults. Finalists from each age division will be on display in the Dairy Building, which will also have new interactive exhibits, including a photo kiosk offering dairy-themed selfies.

The 2021 Illinois State Fair kicks off with the Twilight Parade on Aug. 12 and continues through Aug. 22. Weekday admission was lowered to $5 Sunday through Thursday for the 2019 fair and will remain the same for this year. Friday and Saturday admission is $10. Parking is available on the fairgrounds for $5. Free admission will be available on certain days for veterans and immediate family members (Aug. 15), seniors and scouts (Aug. 16) and first responders (Aug. 20). Admission and parking booklets with frequency discounts are available for those who plan to attend the fair multiple times this season.

Meredith Howard is a former intern for Illinois Times and Springfield Business Journal who will graduate from Baylor University this December with a journalism degree. Her work has also been published by the Pulitzer Center on Crisis Reporting and the Gateway Journalism Review. 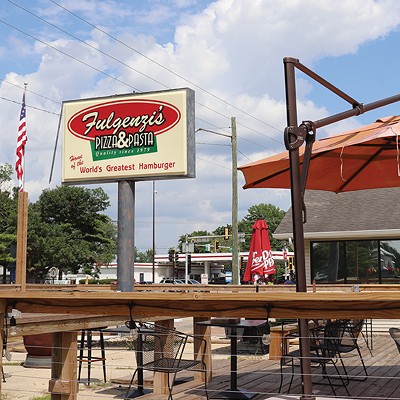