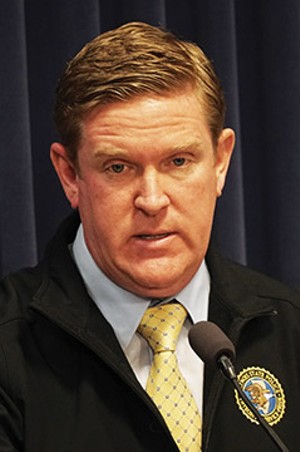 Photo by Lee Milner
Brendan Kelly, acting director for the Illinois State Police, said the department is taking new initiatives in an effort to promote transparency, efficiency and to address the DNA backlog.

The Illinois State Police implemented new initiatives last month to handle the state’s DNA backlog. But even with new standards in place, officials say it could take up to two years to make a sizeable dent in all of the cases awaiting DNA testing. While victims want justice as quickly as possible, the ISP says it’s not simply a matter of hiring more staff.

“There have been millions and millions of dollars thrown at the DNA backlog across this whole country,” said Brendan Kelly, Illinois State Police acting director, during a March 26 press conference. “Money helps, resources help, manpower helps, too. But there are other problems to how evidence is used and collected in some circumstances where DNA isn’t even relevant at all to the case.”

In a joint statement, Kelly and Gov. J.B. Pritzker laid out the steps the Illinois State Police Division of Forensic Services, the agency tasked with processing DNA kits, has taken to address the backlog.

ISP officials have sought new technology to speed up the testing process, including one machine that is capable of testing up to 80 samples at once. Kelly also said he has given his approval for ISP to purchase a device to perform Rapid DNA analysis, which could reduce the time needed to analyze a one-source DNA sample to two hours. Another benefit is machines that process Rapid DNA do not require a lab technician analysis; the results are computer-generated. However, the use of Rapid DNA testing still has limitations.

“It’s not technology that can be used to test DNA from a crime scene,” Kelly said. “There’s a great deal of confusion about this.”

He explained that due to the numerous DNA samples that could be present at a crime scene and the technical analysis needed to identify more than one sample, the FBI has placed restrictions on when Rapid DNA testing may be used.

In 2011, Illinois passed a law to allow police to collect DNA samples from people who have been arrested for violent offenses such as homicide, home invasion and sexual assault. However, before the sample can be tested, a judge must first find that there is reason to believe the suspect was involved.

“We’re kind of at the point where we need a statutory change to introduce Rapid DNA,” said Lt. Joseph Hutchins, a spokesperson for ISP.

Another factor that is out of ISP’s control, according to Kelly, is the need for a judge’s permission to test consumption DNA, a small sample that would essentially be eliminated if tested. Two bills that have been drafted this legislative session would do away with needing a court order to test smaller samples, which Kelly supports.

Currently, there are 518 pending requests to test consumable DNA, and 354 of those cases have been waiting for a response for more than three months, according to an ISP spokesperson. Kelly said that the majority of cases dealing with smaller samples are usually granted and that the current law “is a bit of an artificial delay.”

Another point Kelly and Robin Woolery, Illinois State Police assistant deputy director of the Division of Forensic Services, say they’re attempting to address is a lack of staff in the forensic labs. Kelly and Pritzker said six forensic scientists have been hired to work specifically on biology and DNA-related submissions. The department also intends to hire an additional 10 people, although the training process takes 24 months.

Initiatives to allow for more transparency are also underway, including the creation of a database for tracking sexual assault testing kits so victims can follow the progress. However, this will not influence the speed of DNA kit testing, though Kelly acknowledged it would certainly allow officials to better identify where in the testing process most cases get held up.

“Everybody that’s involved in the process cares about what the victims are going through,” Kelly said. “That’s the biggest frustration when people see the forensic backlog. It gives them the feeling that this is a system that’s cold and indifferent to what it is they’re going through.”