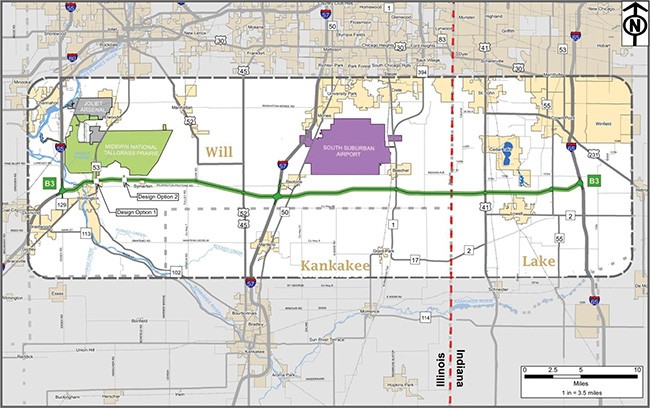 The proposed site of the Illiana Expressway, about 130 miles north of Springfield.
A federal court struck down last week an environmental study used to justify a new tollway in northern Illinois.

It’s the second such loss in court for the controversial project, which was already suspended but still clings to life.

The Illiana Expressway is a proposed 50-mile, east-west toll road which would connect Interstate 55 south of Chicago to Interstate 65 in northwestern Indiana. The project is intended to relieve congestion on Interstate 80, 15 miles to the north.

Controversial from the start, the Illiana proposal has long been a priority for the Illinois Department of Transportation. Gov. Bruce Rauner says Illinois won’t spend more money on the project, but opponents say IDOT has continued to pursue it anyway.

The controversy is twofold: whether the road is actually needed and what effect it may have on Midewin National Tallgrass Prairie, a nearby national nature preserve.

IDOT has projected population growth of more than 170 percent by 2040 in the area surrounding the proposed road, but that estimate is contradicted by two other planning agencies which control federal funding in that area.

A federal court agreed in June 2015, ruling that the study overestimated the consequences of not building the expressway and failed to adequately consider the potential effects on the surrounding area.

While that lawsuit was pending, IDOT and the FHA continued pursuing the project, releasing a second “tier” of the environmental study which built on the first. On Oct. 31, another federal judge ruled that the second tier was invalid because it relied on a first tier which had already been found faulty.

Just before the first federal court decision in June 2015, Rauner vetoed funding for the project, saying that because of the “current fiscal crisis and a lack of sufficient capital resources, the Illiana Expressway will not move forward at this time.” A spokeswoman for Rauner referred a reporter to IDOT.

Still, IDOT continued to defend the environmental study in court, filing a document in October 2015 saying IDOT and its counterpart in Indiana would continue to revise the study.

Howard Learner, executive director of the Chicago-based Environmental Law and Policy Center, calls Illiana a “fiscal folly” which should have died long ago. ELPC represented the environmental groups for free in the lawsuit against the state.

“Not only is the public getting tired of the governor saying one thing and IDOT doing something else, but the court has also expressed frustration,” Learner said. “Enough is enough. It’s time for Governor Rauner and IDOT to bring this boondoggle to a well-deserved end.”

Guy Tridgell, an IDOT spokesman, says the project is suspended, but not terminated. Indeed, IDOT’s court filings indicate the agency wants to continue to study the Illiana proposal once state funds are flowing again. Tridgell also says the environmental study contained other projects besides Illiana.

“We will continue to work with the court on a solution,” Tridgell said. “The Illinois Department of Transportation will consult with Federal Highway Administration and other stakeholders to determine the best path forward.”