If the backhoe had dug just one foot to the east, it might have missed the feature altogether. As it was, archaeologist Floyd Mansberger and the crew of Fever River Research got lucky the day they put an exploratory trench into the yard behind historic Edwards Place: they caught the edge of an 1850s, brick-lined feature loaded with a wealth of artifacts. 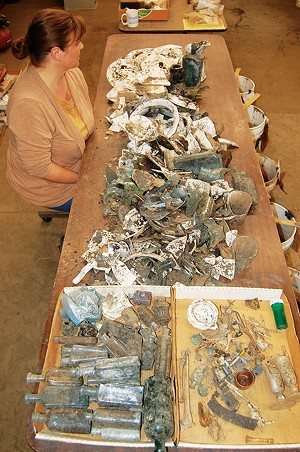 Courtesy of Fever River Research.
Archaeologist Floyd Mansberger called the artifacts recovered from the dig “nothing short of spectacular,” both in quantity and quality.

Edwards Place was built in 1833 and occupied by the Edwards family from 1843-1909. Benjamin Edwards was a prominent local attorney whose brother, Ninian W. Edwards, was married to Mary Lincoln’s sister.

Abraham Lincoln was a frequent guest at Edwards Place, as were Stephen A. Douglas, John T. Stuart, Stephen T. Logan and several other luminaries of the era. It became the headquarters of the Springfield Art Association in 1913, and today that organization operates it as a historic house museum interpreting life in antebellum Springfield.

The archaeological survey was conducted in advance of the Springfield Art Association’s plans to construct a new classroom building to the rear of Edwards Place. Members of the SAA’s Edwards Place Committee advocated for the survey, believing that it could potentially yield important information regarding the Edwards Family, who occupied the mansion from 1843-1909.

“The committee thought it important to complete a professional investigation prior to being covered by new construction,” said Frank Butterfield, chair of the Edwards Place Committee at the time.

The SAA reached out to Mansberger, who immediately agreed that a survey was a good idea. He pointed out that the proposed area of construction fell on what would have been the Edwardses rear yard – a place where 19th century outdoor domestic tasks took place which usually contained outbuildings such as barns, sheds and outhouses.

“The building was in a high-priority area for archaeology,” Mansberger said. “There was a high probability of discovering potentially significant archaeological features.”

With approval from the SAA’s board of directors, Mansberger supervised the digging of two exploratory trenches to the rear of Edwards Place. Both yielded important information. Test Trench 1, excavated in line with the rear service wing of the mansion, revealed post holes that suggest the presence of an early outbuilding such as a barn or shed. It also exposed a circa 1850s privy that had been looted by bottle diggers in the 1990s. Thanks to the intervention of a local archaeologist at the time, the archaeological artifacts from that privy were recovered and are now in the collections of the Illinois State Museum.

Test Trench 2, five feet to the east, also revealed postholes indicative of an early outbuilding, as well as the very eastern edge of what Mansberger called Feature 1, which was likely another antebellum privy.

In the 19th century, it was common practice for people to discard unwanted objects into their outhouses.

Organic materials such as leather and textiles disintegrate, but objects made of glass, ceramic or metal remain preserved underground. To historians and archaeologists, they are treasure troves of artifacts from the narrow window of time that the outhouse was in use – usually a span of about 10-15 years.
“You’re looking at a time capsule of materials of the time,” Mansberger said.

Although the SAA’s initial plan was only to conduct an archaeological survey, Mansberger quickly obtained permission to do a full-scale excavation of Feature 1. The artifacts he recovered are, in his words, “nothing less than spectacular,” both in quantity and quality. The assemblage included everyday and special occasion ceramic and glass tablewares, kitchenwares, chamber pots, pitchers, glass medicine and food containers, and personal items such as the remains of a lady’s fan, an earring, a toothbrush and ebony and ivory dominoes.

Interestingly, many of the artifacts in both privies seem to have been discarded whole and unbroken.

Mansberger speculates that the assemblage represents a single major cleaning episode in the Edwards household, when dozens of unwanted items, including whole sets of dishes, were simply thrown into the outhouse. Although the Edwardses were well off, this level of “conspicuous discard” is puzzling – why did they throw out so many perfectly good items rather than selling them or giving them away?

Some of the artifacts recovered from the recent privy excavation along with photos of the dig are currently on view in the “archaeology room” of Edwards Place. The rest of the assemblage is awaiting formal analysis by Mansberger, who is confident that the artifacts will yield important insight into the lives of the Edwardses and members of their social circle.

“Think of who used those artifacts. Abraham Lincoln, Stephen A. Douglas – they were guests in the Edwards’ home,” said Mansberger.

After a formal report is completed, the Art Association and Mansberger plan to create an exhibition that will place the Edwards artifacts alongside artifacts recovered from working-class 19th century home sites to explore similarities and contrasts in consumption habits.

Erika Holst is the curator of decorative arts and history at the Illinois State Museum and the author of Historic Houses of Lincoln’s Illinois.