$1.2 million will build new houses and demolish others

PHOTO BY PATRICK YEAGLE
A new home under construction by TSP-Hope sits next to an abandoned property due for demolition.
The sounds of nail guns and power saws filled the air in a section of the east side of Springfield last week. Men with tool belts worked feverishly to build a new home at the corner of 12th and Edwards streets, raising walls and covering the frame with plywood.

Right next door, a rundown, boarded-up abandoned house awaits demolition, a reminder that there is still much work to be done.

Both properties belong to TSP-Hope, a nonprofit group focused on building affordable housing, and each property’s metamorphosis is another step toward revitalizing Springfield’s east side.

In late September, The Springfield Project, which spawned TSP-Hope, secured a $1.26 million grant from the U.S. Department of Housing and Urban Development to support TSP-Hope’s overhaul of the neighborhood’s housing.

The money will help pay for 11 new homes and the demolition of 25 abandoned properties within the area bounded by Cook Street and South Grand Avenue between 11th Street and Martin Luther King Drive.

Once TSP receives the funds, they will be disbursed to Habitat for Humanity of Sangamon County and TSP-Hope. Habitat will build five new homes in the 49-square-block area. TSP-Hope has already begun building a few of the other six homes to be funded.

“Honestly, this is not a cure-all for what needs to take place over there,” TSP executive director Tim Rowles says. “But hopefully if we can get this project going, people will see what’s taking place, and we’ll be able to attract or generate some new funding.”

Rowles says he expects to have new homes ready by the start of 2010. “We’re being very aggressive with this,” he says. “But we’re also going to take our time and make sure we do it right.”

Ron Fafoglia, executive director of TSP-Hope, says the neighborhood was chosen because his organization already works there.

“That’s where the most need is,” Fafoglia says. “We’ve got several pieces of property already purchased in that area, and we’re pretty much ready to hit the ground running. We want the work to be concentrated in as small an area as possible to make the biggest impact.”

Dana Plummer, executive director of the local Habitat for Humanity, says the grant would pay for half the cost of the five houses to be built. Plummer says Habitat is still accepting applications to receive one of the homes it will build with the funds.

“It’s exciting, for me, to build in that area,” she says. “They need it. The area needs it. There’s a lot of great people over there.”

Mike Farmer, director of the city’s Office of Planning and Economic Development, said the city will be using other federal dollars to update infrastructure in the east side, including almost 9,000 feet of new sidewalks along Capitol Avenue, as well as new sidewalks along Kansas, Stuart, Brown and Cook streets.

Rowles says the groups involved with the housing project have more plans to rejuvenate the east side in the future.

“We’re interested in not just housing, but also in some retail and commercial development,” he says. “We’d love to see some mixed-use development along South Grand.”

Rowles says the east side redevelopment efforts are a community effort.

“We’ve got to make sure that we build partnerships, that we work together and get everybody involved,” he says. I’m really expecting that once we get started on this, people are going to join together and we’re going to make a positive impact in a place that has long been neglected.”

From the streets to stability 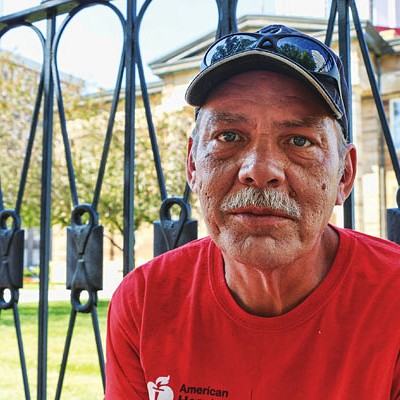