City and park district team up for new summer program 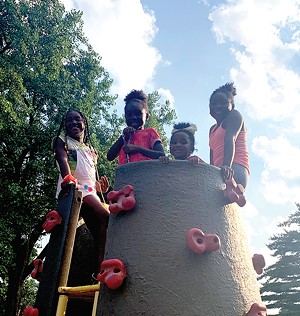 Photo courtesy Springfield Park District
Children played at Comer Cox Park during the kickoff event for the Teen Empowerment Zone. Kids ages 5-12 will be invited to participate in day camps on Tuesdays and the teens will serve as counselors.
Parks are the place to be over the summer. But not every area of town has had the same amount of investment and programming. A new effort aims to help change that.

On July 7, community leaders and children gathered at Comer Cox Park (301 S. Martin Luther King Jr. Drive) where they played games and snacked on flavored shaved ice. They were attending the kickoff event for the "Teen Empowerment Zone" – a new program led by the city and park district to help youth on the east side of town hone their job skills. Funding for the program came from the city's Community Development Block Grant funds.

Ward 2 Ald. Shawn Gregory attended the kickoff meeting and said he's been helping recruit youth, ages 15-22, from the area to be hired for the program. "I've been out knocking on doors in the neighborhood," he said, as well as getting the word out through churches and via social media. Teens will help with day camps that will be offered free of charge to kids in the area.

The program will provide teens a first-time job. Amanda Weaver is assistant director of recreation and marketing for the Springfield Park District. "We'd like to eventually have this be an annual program that happens each summer here," she said. Weaver said the plan to get things going this summer is to have a day camp on Tuesdays for kids ages 5-12. On Wednesday nights, there will be a basketball league for older kids. She said one key component is that the youth recreation associates who are hired by the park district will be part of focus groups to help decide what sorts of activities and events could best get their peers and the larger community involved. Weaver said the teens will have a chance to work on their interview chops and other skills that will be useful for future employment.

"It's all about trying to teach them responsibility," said Gregory. He said he hopes the move is a step toward more investment in youth programming for his ward on the east and north side of Springfield. The employment initiative can help keep older kids out of harm's way and around positive influences, said Gregory. "The more young people that we can keep busy ... the safer we can be in our community."

Ward 3 Ald. Roy Williams also stopped by the kickoff event, where kids played disc golf and basketball in between cooling off with snow cones. "I have always felt Comer Cox is an underutilized park," he said as some kids played in a splash pad nearby. "And this program is going to help get people out into the park and get them moving." Furthermore, the programming will be something that kids in the area can access by walking from their churches or their homes, he said.

Lisa Badger, a Springfield Park Board trustee, said she and Gregory had been pushing to enhance programming at Comer Cox for some time. "Obviously, when youth are more engaged, they stay out of trouble," she said. She said hiring young people from the area to work in the park was one impetus. "There's a bigger feeling of pride and ownership of doing well in your job and taking care of your community when it's your own community." Badger said she hopes the programming will also open up young people's eyes to a possible career path in parks and recreation and, at the very least, get them more involved with the park district. She said in this instance, location for the new empowerment project is especially important. "We have to start thinking about bringing the programs to the people we're trying to reach."

Those aged 15-22 who live in and around Ward 2 and 3 and who are interested in employment with the Youth Empowerment Zone can email mstrieker@springfieldparks.org or call 217-753-2800, extension 2003. More information on the program is at springfieldparks.org.