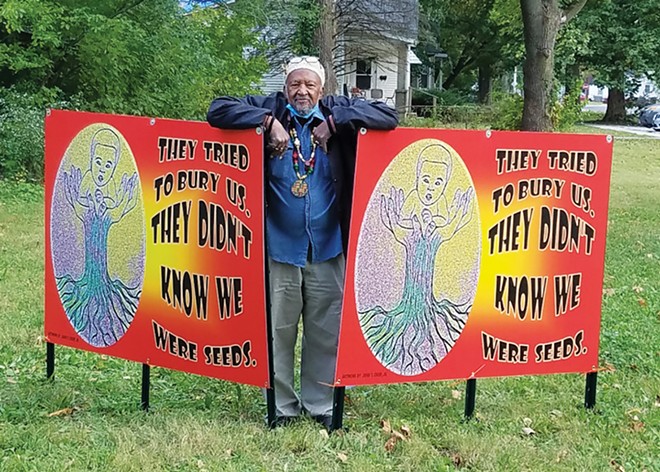 Photo courtesy of Shatriya Smith.
John Crisp Jr. stands with signs he created for the SEAP project, located at the intersection of South Grand Avenue and 14th Street.

Political signs littered the landscape during last year's campaign season. "Some of those signs were left behind," said Shatriya Smith, who lives on the east side of Springfield, "adding to the blight and trash that is already in our neighborhood."

But what if those types of signs could be used to share art and positive affirmations? So began a thought that has morphed into the "Springfield Eastside Art Project" – aka, SEAP. Smith said economic and social injustice has long hit that area of Springfield especially hard, which has been compounded by the pandemic.

"We wanted to brighten the community with artistic creativeness from local artists," said Smith, who helped initiate the new project merging art with yard signs. She said art and culture can be powerful tools for self-expression. She calls the pieces – of which there are about 30 that have been placed in lawns, with residents' permission – a "quiet riot." The aim is to inspire "authentic conversations in our community about art and positive affirmations – we don't get enough of those."

Smith is executive director of the Marcus Garvey-Harriet Tubman Cultural Arts and Research Center – a nonprofit dedicated to Black history and cultural education, art education and youth mentorship. Much of its efforts have been put on hold due to COVID-19 mitigations. But the new project is one way to spread positivity without spreading infection.

One of the first signs to go up was by John Crisp Jr. – founding president of the Garvey-Tubman center. The sign reads: "They tried to bury us, they didn't know we were seeds." The design includes original art by Crisp of a young child being lifted up through tree roots. Another sign includes a depiction of one of his favorite authors, Maya Angelou.

Crisp has created a number of Black history coloring books, featuring national and local figures. He said he hopes to partner with the Boys and Girls Clubs, so that kids can color pages that can later be turned into signs to share in their own yards and neighborhoods.

Creators of lawn signs for the project also include Barbara Mason, a former east side resident and award-winning artist, Jeff Williams, who leads the longstanding punk band NIL8 and several others. Many of the signs pair artwork with affirmations such as, "Feed your soul with gratitude and forgiveness," and, "You don't know what you can do until you try."

For the public art project, the center has relied on anonymous donors, said Smith. The plan is for the project to morph into something bigger. "We do have a next phase for the SEAP program, which is a mini-outdoor gallery, public sculptures and hopefully murals during the spring and summer of 2021."

Another long-term goal is to raise funds for a permanent facility for the center, which would serve as an educational space. Crisp and others facilitate lessons and instrument donations for children from low-income families. The group has also provided a summer camp in years past. During the summer camp, children create art that they sell. The goal is to show them their work is valuable. Similarly, Smith said, the goal with the public art project is to pay a stipend to artists for their contributions.

The Garvey-Tubman center is currently based at First Presbyterian Church in downtown Springfield, but the arrangement has always been temporary. Smith said the center has been grateful for the support there, as well as from other places of faith like Calvary Baptist Church and Abraham Lincoln Unitarian Universalist Congregation. While COVID-19 has meant many plans have been put on hold, the public art is one way to inspire others from a distance for now.