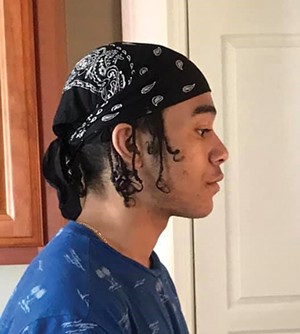 Credit: courtesy of Nancy Marschewski
Colin Marschewski was suspended from school after wearing his braids under a bandana after being told he was not allowed to wear a durag.

Nancy Marschewski and her husband have three adopted sons who are multiracial. One of them was penalized after wearing a durag – a headscarf typically worn by Black males – to Effingham High School. Now the Effingham school board is considering a policy change.

Marschewski, who is white, has taken her sons to hairdressers who specialize in Black hair. But the one her 17-year-old son usually went to stopped taking appointments during the pandemic.

"His hair was getting really frizzy and really long," Marschewski said about her son, Colin. After researching, he did his own braids, and then used a durag which helps retain needed moisture and trains the hair to lay flat.

A couple days after he started the new style, on Feb. 11, a school staff person told Colin it was against the dress code, said Marschewski. "Our son said, 'I don't understand. I see other kids wearing things (other head coverings).' And he was told, 'Don't argue. It's against policy, you need to get it off your head.'"

Effingham, about a two-hour drive southeast of Springfield, has a school district with a student body that is about 90% white and less than 2% Black. Marschewski said she tried to reason with school leadership to no avail. And on April 9, her son was suspended after wearing a bandana to cover his braids during gym class and refusing to take it off, she said.

In an April 23 letter, the American Civil Liberties Union of Illinois urged the school district to change course. It called the policy discriminatory for being "enforced against a student of color for headwear that is important both culturally and for hygienic purposes."

A measure before state legislators would ensure Illinois public schools allow certain types of "protective" cultural hairstyles, such as dreads and braids. But a staff member for one of the bill's sponsors told Illinois Times that durags are not included in the measure since they are considered hats versus hairstyles.

Local school districts in Illinois have much control over their dress codes. Mark Doan, Superintendent for Effingham public schools, said the decision on whether to change the head-wear policy is up to the school board. "Our job as a school district is to, number one, look at community values and then also look at what the law says." The next board meeting is May 24.