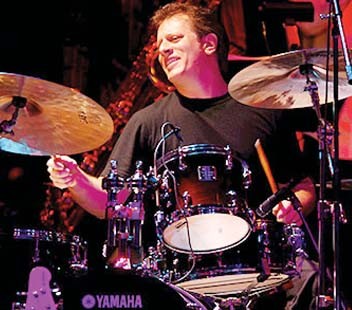 Modern Drummer Hall of Famer, and named their “one of the 25 best drummers of all time,” Dave Weckl joins Drum Fest at Donnie’s Homespun this weekend.

Back in 2010 for the debut of Drum Fest, I started out with a few typical drummer jokes such as “What do you call someone who hangs around with musicians? A drummer.” And a beauty like this slammer, “How can you tell if there is a drummer at your door? The knocking speeds up or, worse yet, he never knows when to come in.” But the fourth incarnation of the gathering leaves no room for joking, as local timekeepers are joined by a couple of the most respected players in the world today.

Originally envisioned by longtime local drummer Dan Shaughnessy, 2013’s show, held at Donnie’s Homespun, was organized by Chris Noonan, another hometown drummer of note, perhaps best known for his work with area jazz-fusion group Dreaming in Colour. All the usual Drum Fest highlights are in place with clinics and performances scheduled throughout the day (see the full schedule on Facebook), plus various local vendors, but this year it’s set up as a ticketed event and all about the drums without other musicians playing along.

“We’re organizing Drum Fest a little different this time with more of a focus on drummers performing as individuals without the jam-band style Danny did,” says Noonan. “We’ve had over 1700 likes on our Facebook page, really showing the brotherhood of drummers. This is a unique event for Springfield and the community is energized to participate.”

A big reason for this year’s added buzz is the addition of world-renowned drummers Dave Weckl and Paul Wertico to the regular list of locals. The famed jazz players are truly considered two of the finest contemporary purveyors of percussion and for them to perform and instruct at our Drum Fest is truly wonderful, as well as telling about the noise our little fest is making.

“These guys are very giving with attitudes about what it’s all about,” says Noonan. “Music is not a competitive sport. Everyone has an ability to show and share and should have the opportunity to do so.”

Along with the big guns, other drummers participating in the instructional performances include John Sluzalis (the “godfather” as Noonan called him), the Millikin University World Percussion Ensemble, Noonan, Darin Holthaus, Jeff Davidson, Scott Mundstock and David Shaw. After the drumming is over around 6 p.m., hang around to see if you win the drawing for a Yamaha Hex Rack and the announcement of the lineup for Drum Fest 2014. Yep, it’s already in the works with even bigger and better stuff.

“We’ve got some real surprises in store for next year,” says Noonan. “And we’re shooting for 2015 to be an international event. We’re really excited about how it’s coming along.”

Sound engineer Dennis Moody is dialing in the drums and Mylas Copeland will emcee the event. The group even built special platforms to quickly and efficiently change drum kits, with Tim Lacy on board as the stage manager.

“Everybody we know in the community has pitched in. It’s very cool,” says Noonan. “It says a lot about who we are in this town.”

Along with the actual Drum Fest on Sunday, Saturday night features a special show by the Dave Weckl Band featuring Jay Oliver, Tommy Kennedy and Gary Meek. The performance is a benefit for the fantastic Springfield drummer and terrific person, Jeff Davidson who recently survived a very serious bout with cancer. All the proceeds from Drum Fest will be donated to the Simmons Cancer Institute at the Southern Illinois University School of Medicine near Memorial Medical Center in Davidson’s name.

And the beat goes on.