Does a residency rule make sense? 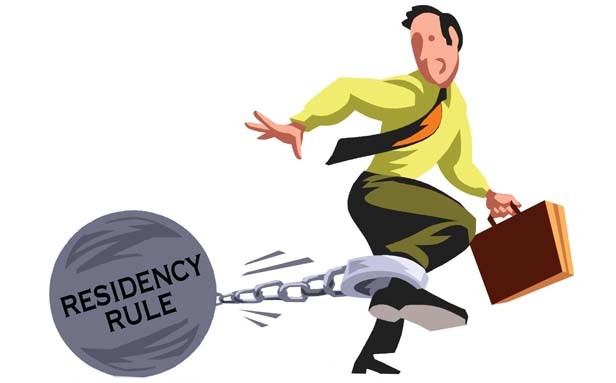 Making one’s address a condition of employment is one of those latent viruses that reside in the American body politic, and which flares up in full-blown symptoms every few decades. Residency requirements were first imposed by big-city political machines; if you wanted the alderman to give you a city job, you and your family had to live – and vote – in that ward. Your job was to vote your patron’s ticket, and your pay for doing it was your weekly paycheck. In effect, the machine paid for your vote, and the public good be damned.

Progressive reformers complained that merit, not patronage, should be the basis of government hiring, and residency rules gradually withered under their scorn. In the 1970s, however, work-here-live-here rules were revived. Cities like Chicago were losing middle class residents to the suburbs as whites fled from bad schools and crime. City Hall couldn’t stop most of them from leaving but they could stop their own garbage collectors and teachers and cops by chaining a ball to their feet in the form of the residency requirement.

Springfield too is losing the population race with its suburbs, and for many of the same reasons as 40 years ago. Rank-and-file municipal employees were required to live within city limits until 2000. Dropping that requirement spurred an exodus, and today more than a third of the City of Springfield’s employees are now thought to live outside the city.

Springfield Citizens for Residency thinks such people are abusing a privilege. Largely at their urging, about 59 percent of city voters endorsed a non-binding referendum on the idea of requiring future city employees to live in the city. The measure had wide support, failing only in those precincts where many city police and firefighters are known to live.

Several rationales have been offered over the years for residency rules, including enhancing the availability of emergency manpower and providing a self-interested incentive for better job performance. The SCR campaign was based on two further  claims – public safety and economic development.

“Vote Yes,” read the brochure, “so that city police live in Springfield neighborhoods.” The rationale for the requirement that police officers be city residents is that they will be more familiar with the community they police. This should make for more effective law enforcement, if only because civilians are more likely to cooperate with cops who are neighbors.

Maybe, although I would like to see some data on how many members of the present force live in problem neighborhoods. One of the incentives to becoming a cop, after all, is earning enough money to move out of the kinds of neighborhoods where crimes tend to happen. Did police performance drop after 2000? Are there measurable differences in performance between resident city cops and their vagabond colleagues, as that argument suggests there ought to be? Even if the city knows, they’re not likely to tell.

The backers of a new Springfield rule also invoked what’s known as the Public Coffer Theory. Resident public employees might or might not be better employees, but they are indisputably better citizens, because they spend money in local shops, support local churches and send their kids to local schools. And obviously, because they must buy or rent shelter, they prop up demand for local housing.

The question is not whether this is good but whether it is fair. Apparently a lot of people think it’s wrong that Springfield taxpayers make Chatham or Lincoln or Beardstown rich when public employees spend the dollars there that Springfield puts in their pockets. However, they certainly don’t seem to mind when the tax dollars earned by people living in Chicago are spent in Springfield in the form of state salaries. Besides, if out-of-towners are doing the jobs they are paid to do, the City of Springfield gets as much back in services as it spends in wages.

The most damning argument against residency rules is the original one from the Progressive era, which is that such rules limit the city’s ability to persuade the best people to work for the city. Only three in five Sangamon Countians live in the city. Limit the applicant pool to them, and instead of the best of the bunch at the price you get the best of the nearest, which in some cases may mean those trapped in the city because they are too poor or ill-educated to get work elsewhere.

Blocking the door to the suburbs for city workers will not make the city thrive; they are too few. To the extent it risks lowering the quality of city services, it will block that door to people thinking about moving back into the city from the suburbs of Sangamon County and elsewhere. And keeping that door open is the only way the economy will really grow.