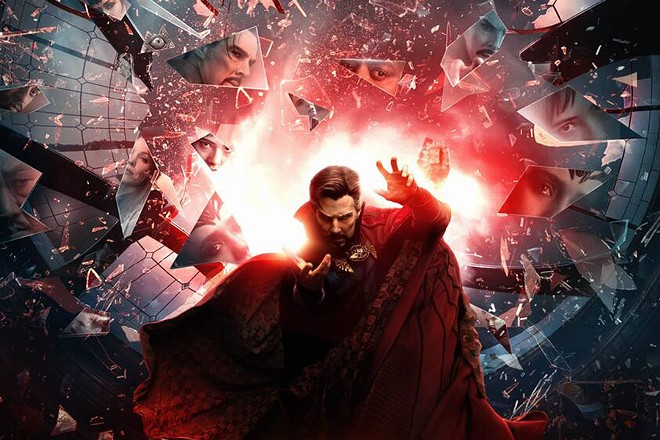 Strange lacks magic
There's something amiss in the Marvel Films Universe. After setting box office records with 2019's Avengers: Endgame, the culmination of their three-phase, 22-movie plan to conquer the international cinematic landscape, they've stumbled badly with their Phase 4 entries, delivering one worthy entry (Shang-Chi) and two lackluster features (Black Widow, The Eternals). Their latest production, Dr Strange in the Multiverse of Madness, seems to have everything needed to right Marvel's listing ship – a fan-favorite character, a veteran genre director and the promise of breaking exciting new narrative ground.

Unfortunately, the magic is missing as Sam Raimi's curious misstep lacks a sense of urgency, a film that spins its wheels what with its needlessly protracted action sequences and flimsy narrative. Strange (the indispensable Benedict Cumberbatch) must trip across various universes to stop former ally Wanda Maximoff (Elizabeth Olson) who's wrecking all sorts of havoc as she wants to find a world where she can life live as a suburban mother. Yeah, that's the impetus for this over-long, special-effects extravaganza that, while it contains one huge surprise, ends up being nothing but a very expensive, wasted opportunity. In theaters.

Broadbent charms in Duke
There's a sense of charm in Roger Michell's The Duke, a true-life crime story, that holds it in good stead. Much of that is provided by screen veteran Jim Broadbent, who's able to portray Kempton Bunton, an eccentric with a heart of gold, without making him appear foolish. This is quite a feat as this would-be author/rabble-rouser lives for making grand gestures and seeking the approval of others, often to his own determent and that of his long-suffering wife (Helen Mirren). Having had various minor brushes with the law and hatched more than one hair-brained scheme in his time, stealing Goya's portrait of The Duke of Wellington wouldn't be out of the question, would it?

The theft and the ripple effect it has on the English populace — circa 1961 — is one of the more fascinating aspects of the movie, as is the impact it has on Bunton and his family. There's more here than meets the eye as a third-act twist is so outlandish, it initially doesn't seem to be true. It's a heck of a story, but what you're left with is a reminder that dreamers like Bunton should be cherished, not shunned. In theaters.

Heaven a flawed, yet fascinating, crime procedural
If nothing else, Dustin Lance Black's Under the Banner of Heaven certainly doesn't lack in ambition. This adaptation of Jon Krakauer's true-life account of the 1984 murders of Brenda Lafferty and her daughter, Erica, is a sprawling account that at times lacks focus. Three storylines run concurrent throughout, one dealing with the efforts of detectives Jeb Pyre (Andrew Garfield) and Bill Taba (Gil Birmingham) to catch the killers as well as one dealing with the Laffertys, a radical Mormon fundamentalist family that may be behind the murders. The third recounts the history of the Church of Latter-Day Saints and the trials of its founder, Brigham Young (Scott Campbell).

The intent is to compare Young and his martyrdom to the Laffertys opposition to the laws in an effort to justify their radical actions. These historical flashbacks upset the rhythm of the story, which would be better served simply focusing on the murders and the fallout that occurred. Still, after two episodes, I'm willing to stick this out as Pyre's crisis of faith – he's questioning the validity of his Mormon faith – and the examination of how radicalism can take hold are fascinating. Streaming on Hulu.