Myers Brothers Building under contract, but developer and city have different visions 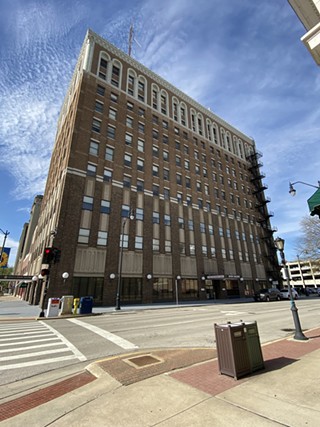 Dean Olsen
The historic Myers Brothers Building downtown is under contract to a Kansas developer who wants to convert it from office space to affordable rental housing, but disagreements with the city of Springfield have jeopardized the project’s financing.
A Kansas company wants to buy the 97-year-old Myers Brothers Building and convert the downtown Springfield office complex and former department store into affordable rental housing.

Richard Myers, chairman of the executive committee for Myers Family Real Estate of Springfield LLC, confirmed to Illinois Times on April 25 that the family entered into a sales contract in October with The Prime Company of Manhattan, Kansas.

However, the $31 million deal involving the building at the southwest corner of East Washington and Fifth streets hasn’t moved forward and is on hold, according to Prime Co. founder and chief executive officer Chris Elsey.

That’s because Prime’s original plan to renovate the 10-story, 106,000-square-foot structure for about 114 rental apartments doesn’t have the support of Springfield’s government, he said.

Prime’s plan was to finance the project, including $15 million to $20 million in renovations, through the Illinois Housing Development Authority, Elsey said. The quasi-state agency offers low-interest loans and grants that can cover property acquisition, renovations and related costs.

The financing hinges on Prime’s plan for the entire building to be devoted to affordable housing, with rents at below-market levels that are geared to tenants with a total annual household income of $36,000 or less, Elsey said.

Mayor Jim Langfelder wants 20% of the proposed units to be rented at below-market rates and 80% reserved for market rent. But the percentages favored by the mayor would create an $8 million gap in financing for the project, Elsey said.

Springfield city officials plan to talk with Prime in the coming days on alternative financing strategies, Elsey said. Local governmental support is necessary for IHDA financing, he said. Langfelder said IHDA officials have told him that proposed and recently granted IHDA funding for affordable housing in Springfield is near a “saturation point,” so it may be difficult to secure IHDA funding for the Myers Brothers project in the near future.

IHDA already has approved low-interest financing for $10 million in renovations at Pine Woods Apartments on the city’s west side, as well as almost $6 million for the proposed 24-unit Park Street Apartments site at 3526 S. Park Ave.

In addition, IHDA approval is pending for the proposed conversion of Poplar Place duplexes into single-family homes and an expansion of the Nehemiah Homes project, Langfelder said. Both sites are on the city’s east side.

Elsey said a 2022 market study he paid for indicated about 10,000 downtown workers have incomes that would qualify for below-market rent, so there’s a definite need for all 114 units in the proposed Myers building project to offer the lower rents.

Langfelder, however, said that in addition to the IHDA funding issue, additional market-rate rental housing is needed downtown for government workers, other white-collar workers and their families, and for the growing number of health care workers employed in the nearby Mid-Illinois Medical District.

Having more moderate-income families living downtown will help rejuvenate that part of the city, he said.

The mayor said he will look into whether some or all of Prime’s funding gap could be made up with financing through the downtown tax-increment financing district.

Neither Elsey nor Myers would reveal the potential sales price for the property, which would include the building and several adjacent parking lots also owned by the Myers family. Sangamon County property tax records put the total fair market value of the properties at slightly more than $2 million.

More than half of the Myers building is vacant, said Myers, 69, who operated the construction firm R.D. Myers & Associates in Springfield for more than 20 years. Myers now is retired and living in Sonoma County, California.

However, operating the building remains profitable, he said. Tenants include Molina Healthcare; Myers Commercial Real Estate, operated by Stephen D. Myers, a distant cousin of Richard Myers and a part-owner of the building; and the law firms of Giffin, Winning, Cohen & Bodewes and Cherry Frazier & Sabin.

A “supermajority” of the approximately 20 owners of the limited liability corporation voted in favor of a potential sale, Richard Myers said.

The decision to sell came before the COVID-19 pandemic and was related to the lack of interest in holding onto the property as the Myers family has grown and many members have moved to other parts of the country and have less connection with Springfield, he said.

Some owners live in the Springfield area, but a majority live elsewhere and as far away as California, Washington state, Georgia, Florida and Texas, Myers said.

“It was becoming unwieldy,” he said.

For some of the owners, including himself, there’s “definitely an emotional attachment to the building that goes way back,” he said. “The decision was not made lightly.”

The ownership of Myers Brothers Department Store began on the east side of the Old State Capitol Square in 1886 with brothers Albert, Louis and Julius Myers.

Their father, Morris Myers, was an immigrant from Germany who opened a general store in Athens in 1858, then moved his store to Springfield in 1865.

The brothers’ first Myers Brothers clothing store, a five-story structure at the southwest corner of Fifth and Washington streets, was destroyed by fire in 1924.

The brothers bought a building a block away and reopened the morning after the fire, then constructed the 10-story building. The family initially operated the basement and first four floors as the Myers Department Store, with the upper floors rented as office space, Richard Myers said.

The building – made of reinforced, poured concrete with an exterior of brick and terra cotta – is in good shape structurally, and the building’s exterior was restored in the mid-2010s, Myers said.