Mayor Jim Langfelder has changed plans to convert a portion of Adams Street into a pedestrian plaza during weekends, deciding that the street should remain open to vehicular traffic.

The city had granted a permit to close Adams between Fourth and Fifth streets from noon on Fridays until Mondays at 7 a.m. through the end of October. Now, under what the mayor calls a compromise, the street would still close on Sundays but otherwise would remain open, reduced to one westbound lane with parklets – outdoor dining areas typically protected by barricades – on either side of the street fronting businesses that have dubbed themselves the Adams Family.

It’s not what the Adams Family wants.

“We haven’t gotten special treatment, the truth is we put the work in, the creativity in, and leveraged the advantages of our location which happens to be a side street that is already regularly shut down to create something cool,” Josh Flanders, proprietor of Buzz Bomb Brewing Co., writes on the brewery’s website. “We've worked with the city and the mayor on several things to great success but in this case we don't agree on the problem or the solution.”
click to enlarge 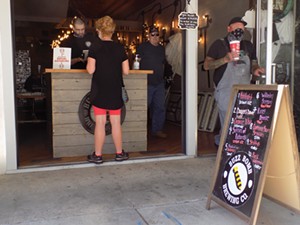 Photo by Bruce Rushton
A customer bellies up to the bar at Buzz Bomb Brewing Co., which wants Adams Street to be closed on weekends.

The street has been closed during weekends during the pandemic, with the move to extend the closing through October seen as a more permanent arrangement. But other businesses, including Haxel Law and JP Kelly’s, want a street with cars, according to Langfelder and Martin Haxel, whose building includes upper story residential space as well as a law office.

“I just want traffic flowing down the street and reasonable controls to be kept on outdoor noise,” Haxel said. “I think it is a given that most people just want to be able to get where they want to go easily and park nearby. That means keeping a street a street.”

The change came after a Monday meeting between Langfelder, business owners and downtown boosters, including Lisa Clemmons Stott, executive director of Downtown Springfield, Inc., who announced her resignation two days later, effective at the end of this month. Clemmons Stott, who has pushed the city for better land-use planning downtown, has not returned phone calls.

In an interview, Flanders acknowledged concerns about noise from live music. “We try to keep it down,” he said. The solution, he said, lies not in canceling permission to close the street but in passing a citywide noise ordinance.

Langfelder says that weekend closures will continue through the end of this month to allow time for parklet installation, which he says will reduce speeds.

“What’s happening immediately is going to be the parklets, and now kind of a road diet, if you will, when you have the parklets,” the mayor said. “I think it will slow down traffic automatically.”