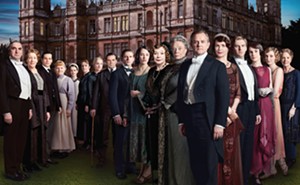 “They should have called it Downton crack,” said my daughter Ashley, a fellow enthusiast. “Downton Abbey” which appears in America under the aegis of PBS’s “Masterpiece Theater,” has become the most watched ,television series in history. And not just in English-speaking countries; it has a huge following around the world, especially in China. Recently a cast member was astonished to be recognized as he was cycling in Cambodia.

Food, cooking and eating have been integral parts of “Downton” from the beginning. There are multiple reasons: much of what’s filmed below stairs takes place in the kitchen.

Upstairs, the overwhelmingly imposing dining room is where much of the drama takes place. The dining room is the setting where disturbing or delightful letters are handed ‘round at breakfast, confrontations erupt during luncheons; and smirks, innuendo and barely averted disasters are sometimes seen at dinner.

In those days, dining etiquette was fixed and absolute, both for the Crawleys and their guests. That etiquette wasn’t just about the diners’ table manners, either. The staff had equally rigid and even more numerous rules: measurements to ensure precise distances between guests’ place settings, the acceptable order in which diners were served, which staffer was suitable to serve what and on and on.

Still, until “Downton’s” fourth season, the food itself most often took a back seat to the action, though not always. But in the fourth season last year, footman Alfred applied for a position in one of London’s famous hotel restaurants, working as an apprentice with the goal of becoming a real chef. “Downton’s” cook, Mrs. Patmore, and her assistant Daisy (who fancies Alfred) helped him prepare for his audition. Though he doesn’t make the cut, there’s sure to be more on that score in the coming season, and it will be fun to see what’s in store.

Some folks may have been surprised at the sophistication of Mrs. Patmore’s cooking and at what would be expected of Alfred in London. British cooking has had a bad reputation for years in America, largely undeserved, the result of draconian rationing during and after both world wars. But Great Britain has a wonderful agricultural environment. So while home-style British cooking may not have been sophisticated, the meat, fish and produce that went into it would have been superb – at least for those who could afford or have access to them.

The Crowley/Grantham family would have had the best of British cooking: splendid roasts, game, seafood, puddings, produce in season and out from greenhouses. But much of what they consumed at dinner and especially at elegant feasts would have been French haute cuisine, at which even earthy Mrs. Patmore was adept.

August Escoffier was considered even in his own lifetime to be the one of the greatest, most influential chefs that ever lived. Even today, chefs and food professionals utter his name with reverence. But although Escoffier was French he achieved his greatest initial successes in London at the Savoy Hotel. Later, he’d help found the Ritz-Carlton Hotels and open world-renowned restaurants in Paris and Monte Carlo. But it all started in Britain.

My husband and I went to the beautifully restored Virginia Theater in Champaign earlier this month for a showing of the first half of “Downton Abbey’s” season five premier. It was a festive and sold-out event, complete with a costume competition and two impeccably restored Packards outside the theater and cardboard stand-ups of “Downton’s” main characters inside for photo ops. We got there early to snag good seats but watching the crowd and the costumes made the time pass quickly. The season five preview was especially fun because the full theater of “Downton” enthusiasts were as amused by the inside jokes and intrigued by plot developments as were we.

So what happens next at “Downton Abbey”? Peter and I agreed: You’ll have to waterboard us to find out!

Kedgeree is the first dish that appears in the first minutes of the first episode of “Downton Abbey.” I smiled when I saw it, because it’s not just an old favorite of Britons, it’s one of mine, too. Kedgeree originated in the British Colonial Indian Raj, when the British monarch was styled, “Empress (or Emperor) of India,” along with other titles around the world.

Though the British brought dishes from India and their other “possessions” the versions that ended up on English tables, not least aristocratic ones, were toned down considerably. Sometimes that may not have been a good thing, but in the case of kedgeree it is a happy one: it’s comfort food with just a pinch of exotic.

Served most often for breakfast in Britain, I usually make kedgeree for brunch or dinner. Sometimes I make rice specifically for kedgeree, but most often I’ve made extra earlier in the week to save for it. Smoked haddock is the predominant fish used in the U.K. but isn’t always available here. I use inexpensive and delicious tinned kippers (aka smoked herring filets) that are easily found in local groceries alongside tinned tuna and salmon.

These days, some cooks like to hearken back to kedgeree’s Indian origins by adding extra heat, sweets, spices and condiments to the dish. Though I’ve certainly enjoyed some of those bumped up ingredients, I still have a great fondness for – and make – the gentler version that would have been enjoyed both below and upstairs at “Downton Abbey.”

Most kippers available locally come in tins that range from around 3 1/4 ounces to 3 1/2 ounces. Other size tins exist; just make sure that you have at least 10 ounces and as much as a pound of kippers.


Remove the kippered herring from the tins, keeping it in as large pieces as possible. Drain the kippers and save their juices and that in the tins. Set aside separately.

If using the raisins, cover them with water and microwave for a minute. Let stand until they are at room temperature.

In a heavy pan, melt the butter over medium heat, then add the onions and curry powder as well as the ginger and hot pepper if you are using them. Stir to combine everything, then cover the pan and cook, stirring occasionally, until the onion is soft.

Stir the reserved kipper juices into the pan and cook a minute longer. Add the rice to the pan and combine it thoroughly with the onion mixture. If the rice is cold and leftover, you may need to add a bit of water. The rice should be moist, but not at all soggy or soupy.

Mix in the raisins, if using. Very gently mix in the kippered herring, keeping it in as large pieces as possible.

Gently turn into a serving dish. Garnish with the quartered or sliced hardboiled eggs, the parsley, and, if using, the cilantro and nuts.
Serves 2-6.