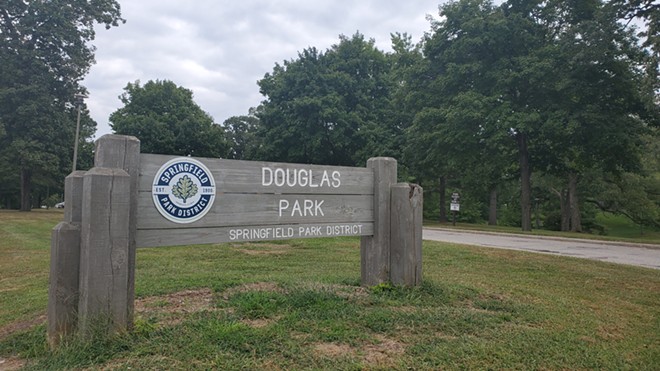 Rachel Otwell
Douglas Park was added to the Springfield park system in 1920 and sits on 26 acres.

Stephen A. Douglas was a complicated person. So said Samuel Wheeler, Lincoln scholar and former state historian. "If it weren't for Abraham Lincoln, this would be the land of Douglas," said Wheeler. Douglas – who was an Illinois resident, politician and lawyer – is largely known in Springfield for his debates with Lincoln. That's apparent in the fact a Douglas statue sits prominently on the Illinois Capitol lawn, behind the one of Abraham Lincoln.

That statue of Douglas is slated to go, in the wake of calls from citizens and lawmakers to remove statues from the Statehouse grounds that serve to honor those who profited from slavery, namely Douglas and the state's first lieutenant governor, Pierre Menard. As advocates for racial justice call for changes throughout the country, the movement means residents are also reconsidering the names of Springfield parks.

After a group of student organizers in Chicago demanded a park there named after Stephen Douglas be named for Frederick Douglass instead, the Chicago Park District moved to rename the park and its own public comment process has been launched, according to Block Club Chicago. Douglass was a former slave, famous orator and civil rights proponent. Douglass had delivered a speech in Springfield, as reported by Illinois Times in April, and he met with Lincoln during his time as president.

Springfield park district trustee Lisa Badger introduced a proposal in mid-August to rename Douglas Park (943 W. Mason St.) after Douglass instead of the Lincoln foe. "There has been an extremely heightened level of civil unrest that this country has not seen in decades," Badger said during the board meeting. She said she started receiving emails in May from people drawing attention to the fact Douglas Park was named after Stephen Douglas, and asking if it too could instead be named after Douglass. "There is a huge call from the community that they don't want people such as Stephen Douglas honored, and furthermore we need to pay more attention to Black people in the community throughout time," she had said.

Springfield attorney Don Hanrahan is a member of Springfield Call to Action, a progressive umbrella organization of advocacy groups. He addressed the board and later spoke with Illinois Times. "These symbols of racism, they have an effect," said Hanrahan. "It says something about how our community is going to address its specific and rather terrible history of racism. It's just a start, we recognize that, but it's an important start." Hanrahan said the group is asking that the board remove the name of Douglas, that all park names reflect the diversity of the community, and that the process to rename the park and potentially others involve community stakeholders.

"History changes all the time. The way we live our lives today in 2020 influences the way we see the past," Wheeler said. Wheeler said it's a fact that Douglas profited from slavery, through a plantation in Mississippi in his wife's name. Wheeler said Douglas, living in the North, knew the optics associated with attaching his own name could have a negative impact on his aspirations. Still, "The slavery system, slave labor, helped fund his political career, and so that is significant."

Douglas was a Union supporter, but one who advocated for popular sovereignty, that is the territorial right to slavery. His debates with Lincoln helped raise Lincoln's profile. Douglas, a U.S. senator, also influenced the beginning of the Civil War. "He supported a series of political policies, legislation, that opened up the possibility of slavery expanding," said Wheeler. And that's not to be celebrated. "The American Civil War, in which 2% of the American population died, is a horrible tragedy in American history."

Some suggested naming the park after Otis Duncan, a Black Springfield native and high-ranking lieutenant colonel during World War I. Badger told Illinois Times discussions are ongoing about the best way to solicit feedback from residents and how to proceed, but she hopes a vote is taken in coming weeks that would rename Douglas Park. And a broader look is also needed, she said. "We have over 30 parks ... we have one park named after a Black person. So it's not representative of our community." Black Lives Matter Springfield president Sunshine Clemons agreed. "We are trying to become more morally and socially aware as a society," said Clemons. "It should have been done in the past. But just because it wasn't doesn't mean that we can't correct that now."

Badger said she plans to reach out to the Springfield and Central Illinois African American History Museum and other local groups that work on civil rights issues regarding thoughts on how best to proceed. "The time to do this is now, however we want to be very thoughtful and considerate about it."

This story has been updated to clarify details of a park name change in Chicago.