Does FutureGen have a future? 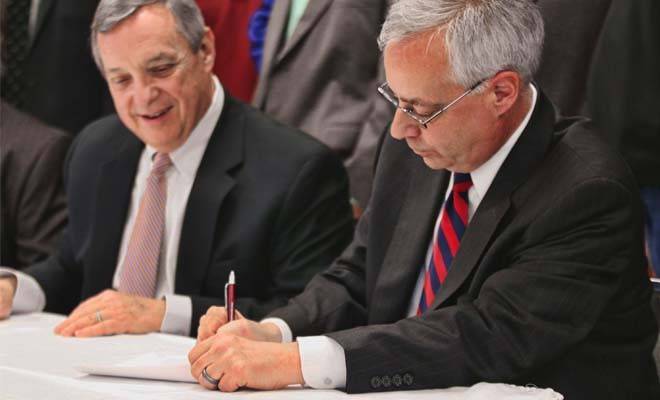 The federally backed FutureGen 2.0 project aims to capture carbon dioxide emissions from coal-fired power plants and inject the gas deep underground in a rural area west of Springfield. The FutureGen Alliance signed a labor agreement with the federal government on Monday, and the U.S. Environmental Protection Agency is currently seeking public comment on the proposal.

Although the project has been in development for more than a decade and was even canceled at one point, the labor agreement and public comment period are signs of progress. Still, the technology involved faces potential hurdles that may limit its viability.

In 2003, former president George W. Bush announced the FutureGen project as a federal-corporate partnership to develop a “clean coal” technology that would reduce pollution from the fossil fuel used to generate much of the nation’s energy.  The Bush administration canceled the program in 2008, citing cost overruns, but it was revived in 2009 under President Barack Obama.

Previously planned for a site near Mattoon in eastern Illinois, the current iteration of FutureGen includes the shuttered coal plant at Meredosia and a pipeline carrying carbon dioxide from the plant to a rural injection site northeast of Jacksonville. The injection site would send an estimated 1.1 million tons of carbon dioxide underground each year for 30 years.

Carbon capture and storage, also known as carbon sequestration, is considered safe by researchers, and it appears to have a safe track record in other countries. One such project in Norway has been injecting carbon dioxide underground since 1996, with another in Canada that began in 2000 and a third in Algeria which started in 2004. Other projects, some with smaller capacities, have come online since then.

The scale of the carbon dioxide problem is staggering, however. The U.S. energy industry generated 5.3 billion metric tons of carbon dioxide in 2013 alone – not counting carbon dioxide from other activities like driving and industrial processes.  Given the FutureGen project’s estimated capacity of 1.1 million tons each year, that means the U.S. would need about 2,890 FutureGen-like facilities to meet the 60 percent reduction in carbon dioxide called for by the Presidential Climate Action Project. The PCAP was created in 2007 to recommend climate solutions that don’t require congressional action. Eliminating carbon dioxide emissions from the energy industry would require about 4,800 FutureGens.

The FutureGen Alliance, a group of energy businesses developing the project, says its plant would capture at least 90 percent of the carbon dioxide that would otherwise be released into the air from the Meredosia plant. The project would also capture other pollutants like sulfur dioxide, mercury and the particles that create smog, the Alliance points out.

Ken Humphreys, CEO of the FutureGen Alliance, says the expected injection capacity of the FutureGen project is only a demonstration, meaning the technology could be scaled up to increase capacity.

Still, environmentalists say the cost of developing and building carbon sequestration plants makes them economically unviable. The FutureGen project has been criticized for cost overruns, and its total cost is expected to be $1.65 billion. Some of that cost involves development and research that wouldn’t have to be replicated by later facilities, but the sheer number of facilities needed means the nation’s investment in carbon sequestration would undoubtedly be enormous if the technology were adopted as standard.

Humphreys says as the technology becomes more advanced, the cost will naturally decrease.

“It’s an inequitable comparison to say a first-of-its-kind plant is the same as a mature technology,” Humphreys said. “The same would have been true of the first wind turbine, versus what wind turbines produce power at today. This project is about reducing the learning curve and at the same time reducing the cost.”

Additionally, the technology for carbon sequestration faces another economic hurdle. Capturing carbon dioxide from power plants reduces their energy output by 20 to 40 percent, according to estimates from the U.S. Department of Energy and the Massachusetts Institute of Technology. In order to make up for the lower energy output, the cost of energy produced by such plants is expected to be higher, which could make it uneconomical compared with other energy sources.

Environmental groups say the price tag of implementing carbon sequestration projects could easily fund the majority of the nation’s transition to renewable energy sources like wind and solar. But coal’s prevalence and perceived reliability over renewables makes that an unlikely alternative. Humphreys says all of the nation’s major energy analysts agree that the U.S. will need a portfolio of energy options in the future.

“Wind and solar have a place in our future, but it’s an undeniable reality that gas and coal are here for the long run,” he said. “Then it becomes a question of, if clean energy is our goal, what technologies can you deploy – related to any of these energy technologies – that move them in the direction of being cleaner. So in our case, helping move forward cleaner coal is the objective.”