The need for expanded work-based schooling in Springfield 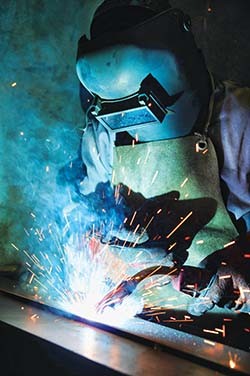 PHOTO BY METROCREATIVECONNECTION.COM
The other day the Springfield School District 186 board took a break from discussions about finding a new superintendent – which it is not in a hurry to do – and heard a few things about something they ought to be in a hurry to do.

Capital Area Career Center director Bob Klingborg informed the board that enrollment had increased at that regional career and vocational school. He was asked why the center does not accept freshman and sophomore students. The questioner suggested that many students by then know they are not cut out for lives as corporate apparatchiks; if they were learning a trade at CACC that held the prospect of a money job after high school, fewer of them would drop out.

According to the SJ-R, Klingborg said he would like to accept younger students, but the district’s curriculum is so focused on preparing kids for college that guidance counselors feel compelled to push freshmen and sophomores into classes in core academic subjects to prepare them for standardized tests that are likely to prove what the kids already know about themselves.

So, class, let’s sum up. We have an urban public school district from which far too many kids drop out before they’ve mastered the skills and the attitudes toward work that they will need to sustain themselves. Yet that district has so devoted itself to cramming square pegs into round holes that it cannot offer these kids an alternative education that is available and appropriate for most of them before they give up and leave school altogether.

Citizen Bob Blackwell suggested the district think about maybe someday considering a program that supplements core instruction with CACC classes for kids identified as not college-bound. Which is pretty much what District 186 used to do 50 years ago. It then employed a tracking or streaming method that offered distinct paths to students according to their presumed futures in college, clerical work or the trades. Kids were assessed by tests of aptitudes, not only their mastery of academic arcana, and they were assigned future courses appropriate to their presumed potentials. A kid thus had two or even three paths by which she might get up on the stage on graduation day to receive her diploma.

Trust me, dear reader, I am typing these words with gloves on, lest the words burn my fingers. I know well how tracking reinforced, even duplicated a class- and race-based social hierarchy. The lower track core classes were often remedial classes in drag, working class kids were too automatically fed into the lower tracks, too many bright girls were automatically doomed to shorthand and typing courses, too many disruptive males were exiled to shop and the tyranny of the guidance counselor could be as bad as today’s tyranny of the test.

All problems that need to be avoided if possible and fixed when necessary. Were some new and improved form of tracking to be installed, it would require at a minimum the use of more sophisticated evaluative instruments and more and more sophisticated guidance counselors (no more assigning a kid to four years of shop on the basis of his wardrobe).

Key to avoiding the stigmatization problem (and the low standards and stingy budgets that historically attend “vocational” programs) is to raise the prestige of lower-track training, both within the schools and the community. It was to eliminate the presumed stigma of making a living using tools other than a computer mouse, remember, that inspired the Capital Area Vocational Center to change its name to the Capital Area Career Center.

No such stigma attaches to non-college-prep schooling in more civilized nations. Germany has arguably the best-trained workforce in the world. Students there are tracked by aptitude at an early age, and many enter training and apprenticeship programs during high school. The approach is common across northern Europe, where between 40 to 70 percent of students opt for degrees earned by a combination of classroom and workplace learning.

These programs are anything but dumping grounds for dullards. Training is funded by employers who demand real-world technical training in the advanced techniques. Students get paid while they learn and finish with the equivalent to an American technical degree. In Germany, only a third of high school students go on to college, but 97 percent of students graduate. Germany is better off, and so are the students.