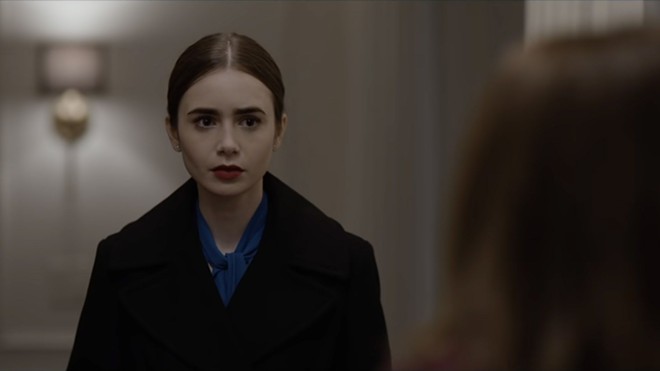 Since movie theaters have shut down across the country, I've been sent a great many films to watch that were never meant to get a theatrical release, destined to go straight to video-on-demand platforms. Watching more of these movies than I normally would, I've come to value the product produced by Hollywood studios. To be sure, not everything that comes out of Tinsel Town is good, but there's a degree of professionalism about them that is sorely lacking in the straight-to-home fare.

Case in point, Vaughn Stein's Inheritance. Dan Rather famously once said, "If it looks like a duck, walks like a duck and quacks like a duck, you've got a duck." Keeping that analogy in mind, this thriller looks like a movie in that it has recognizable actors in it, decent production values and a visual style to it that belies its modest budget. But it's far from being a real movie as it lacks a degree of quality making it suitable for mass consumption. Much like Vaughn's previous effort, Terminal, this is a poorly written, ham-fisted effort that wallows in narrative diversions that tax the audience's patience and led to this particular viewer throwing his hands up in despair over the director's inability to create a sense of urgency, despite having more than enough plotlines to exploit.

I suspect that Stein entered into a bet in which he was forced to stuff as much exposition in the shortest amount of time possible to start the movie. In the film's first three-and-a-half minutes, we are introduced to New York City district attorney Lauren Monroe (Lily Collins), a young woman who suffers no fools in the courtroom. She has a brother (Chace Crawford) who's running for congress and there seems to be a whiff of scandal dogging his campaign and, oh by the way, their father (Patrick Warburton) just died of an apparent heart attack. All of this is introduced to the viewer in a rapid-fire manner, an assault on the senses that would have had me walking away if I weren't obligated to review this movie.

Of course, this is just the tip of the iceberg as far as the plot is concerned as Lauren finds out dear old dad had quite a few secrets. Seems he supported a mistress (Rebecca Adams) who bore him a child and the capper, he's kept a former friend of his locked up in a bunker in the backyard for nearly 30 years! This would be Morgan Warner (Simon Pegg), who has even more secrets to reveal to Lauren and our disbelieving ears.

What's so frustrating about the film is that Matthew Kennedy's script takes so long to get to the point. A full 35 minutes goes by before we get Warner's backstory, as numerous flimsy narrative delays are ponied out before the big reveal. Far from creating suspense, this only stokes frustration and disinterest. It's truly remarkable how many different plot strands Stein has at hand- six by my count – and still fail to move the story along. There's no narrative momentum here, just a story that spins its wheels.

Collins, miscast here, does her best to throw this film on her shoulders and carry it to credibility with a fierce performance but her determination is no match for the lack of direction plaguing this project. Hoping that Marlon Espino's omnipresent, ominous score will convey a sense of urgency or emotion he can't, Stein proves once more that cogent storytelling is a skill he's yet to master. I don't dislike anyone enough to bequeath this Inheritance to.