A culinary expedition to the Carolina Lowcountry 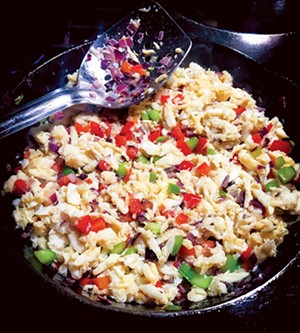 Photo by Ann Shaffer Glatz
“Ol” Fuskie Fried Crab Rice.
It was a cold, windy morning as we took our 40-minute ferry ride from Hilton Head to Daufuskie Island off the South Carolina coast. Daufuskie is a remote and isolated island, inhabited by only 400 people, and accessible only by boat. I was on a mission to learn and write about the culinary traditions of the Gullah Geechee, descendants of enslaved people from west Africa.

I first became aware of the Gullah people from an episode of Padma Lakshmi's Hulu series Taste the Nation. My wife, an avid reader and film buff, was already familiar with Daufuskie Island from Pat Conroy's books (and the movie adaptations) The Water is Wide and Conrack. We were on my way to meet up with cookbook author and Gullah culinary historian Sallie Ann Robinson, a sixth-generation Daufuskie native. Sallie Ann was one of the students Pat Conroy wrote about in The Water Is Wide, which was based on the year he spent teaching 18 children in Daufuskie Island's two-room schoolhouse.

The Atlantic coastal regions of South Carolina, Georgia and northern Florida are known as the Lowcountry. This coastal region is characterized by a rich, fertile environment of scenic marshes, winding rivers and estuaries where fresh water and saltwater mix.

The Lowcountry ports of Charleston and Savannah were the major points of entry for enslaved Africans. The terroir of the Lowcountry had much in common with rice-growing regions of west Africa, and slaves with a knowledge of rice farming were brought over to develop the Lowcountry's rice economy. Soon the Lowcountry was covered by thousands of acres of rice fields and this area became known as the "Rice Coast." The enslaved African farmers brought the skills for cultivation and tidal irrigation that made rice one of the most successful industries in early America. The long-grain rice variety known as Carolina Gold was highly coveted, and the rice economy flourished. At its peak, over 100 million pounds of rice a year were exported to places as far away as Japan and Indonesia. The end of slavery brought an end to this flourishing rice economy and in the years following the Civil War, Charleston suffered a nearly 80% decrease in rice production.

Many of the descendants of the enslaved West African rice farmers settled in the Sea Islands and became known as the Gullah Geechee. For almost a century following the Civil War, the Sea Islands were reachable only by boat. This geography created a remoteness and isolation which allowed the Gullah to hold onto more of their African roots than any other African American culture in the country. The Gullah developed their own language, an English-based vernacular, which incorporated elements of the African languages they brought with them on the slave ships. Their tradition of hand-woven sweetgrass baskets, derived from baskets they used as tools in rice production back in Africa, have become museum pieces.

The renowned cuisine of the Lowcountry is essentially the cuisine of the Gullah Geechee, melding traditional African cooking methods with the abundant local seafood and game, rice and okra, from seeds brought over by the slaves from Africa.

Sallie Ann Robinson is an energetic woman with a wide smile and hearty laugh. Her passion and enthusiasm for preserving the traditions and culture of her Gullah ancestors is infectious. Born in 1958, two years before Daufuskie had electricity, she grew up on an island without paved roads or a grocery store. Sallie Ann's family had to be self-reliant, growing their own fruits and vegetables, and raising poultry, hogs and cows. They hunted game in the woods and foraged for herbs and berries. They made their own nets and traps and caught shrimp, crabs and mullet. Though poor by modern standards, they experienced abundance.

While driving us around the island, she shared stories of growing up isolated and unaware of the world outside her island. She described Gullah cuisine as "simple comfort food" based on local, fresh, seasonal, unprocessed ingredients. Growing up, she ate seafood four or five times a week. Dinner was usually cooked slowly in a cast-iron pot on a wood stove. "That adds a lot of flavor to the food," Sallie Ann explained.

One of Sallie Ann's favorite meals is fried crab rice. They would catch crabs in cage-like traps set off docks. Picking crab meat out of its shell is time-consuming and because "many hands make light work," it was a family affair. Everyone would sit around the kitchen table and "go to pickin'."

Back on the mainland, and anxious to recreate Sallie Ann's recipe, I bought a sackful of live crabs from Bobo's Seafood and brought them back to our bus. As I heated up a pot of water on my stove, I carefully emptied out the bag of crabs into the sink. Freed of the confines of their sack, the crabs came to life and began crawling onto the counter. When I tried to push them back, one of the crabs grabbed onto my tongs with its menacing claws and hung on for dear life. As I wrestled to shake him off, several of his buddies managed to climb out of the sink onto the floor and attack my wife's bare toes. After much screaming and commotion, I managed to transfer all the little monsters into my boiling pot.

Sallie Ann was correct. Picking crab meat is time-consuming and tedious, but the resulting dish, "OL" Fuskie Fried Crab Rice, was truly delicious. I won't judge you if you choose to use the cooked, pasteurized crab meat from the refrigerated case at your grocery store.

Serves 2 for a full meal or 4 sides

A pinch of salt

Salt and black pepper to taste

Rinse and drain the rice several times in cool water. Put the rice into a medium pot, cover with the water and add a pinch of salt. Bring to a boil, reduce the heat to low, cover, and cook for about 20 minutes, until the rice is done and the water is absorbed.

Fry the bacon until crispy in a 12-inch skillet. Remove the bacon with a slotted spoon and set aside.

Add the oil to the bacon fat in the skillet, and over medium heat, saute the celery, bell pepper and onion until tender.

Add the crab and cook for another 5 to 10 minutes until the crab begins to brown.

Add the bacon, cooked rice and garlic powder. Season to taste with salt and pepper, and stir until evenly combined. Reduce the heat to low, cover the skillet and cook for an additional 10 minutes.

Bertha Bus has arrived at its winter home in Florida where Peter is learning how to how make smoked mullet dip and conch fritters.