District 186 defends decision to build rather than renovate 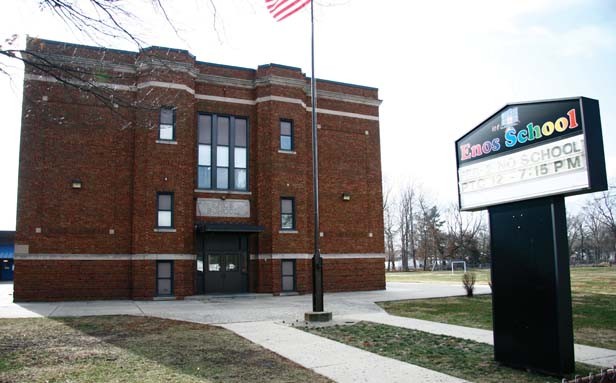 PHOTO BY PATRICK YEAGLE
Enos Elementary School is scheduled to be demolished and replaced, but Springfield developer Dan Mulcahy, who wishes to turn the current school into high-end lofts, says the school district's cost estimate for the replacement project is likely too low.

A Springfield developer with plans to revamp part of the Mid-Illinois Medical District says Springfield School District 186’s plan to replace the current Enos Elementary School is likely to cost more than expected.

Dan Mulcahy, the Springfield developer behind Dankor Development LLC, says the district’s plan fails to completely account for factors like asbestos removal, paving and more. But the district defends its estimate, saying the cost could be even lower than expected.
Mulcahy, who says he has developed projects in Springfield worth about $100 million, including the planned County Market grocery store at Second and Carpenter streets, approached the school board in November 2011 with plans to convert the current Enos Elementary School into loft apartments and build the new school on a different nearby site. The school board did not respond to Mulcahy’s proposal.
A one-percent sales tax referendum to pay for school upgrade projects in districts across Sangamon County failed in November 2010, so the costs of the Enos Elementary project and a separate Matheny-Withrow Elementary School replacement project will be paid by state bonds created to improve health and safety features of schools.
Mulcahy says he isn’t against building a new school, but he says incidental costs like tearing down the current structure would likely drive the cost higher than anticipated. He points to a cost comparison contained in a 2007 study by Graham and Hyde Architects of Springfield that lists the new school’s base cost at slightly more than $7 million. The same study put the cost of renovating the current school at $7.2 million.
Those numbers don’t include an architecture and engineering fee of 10 percent or a required 7.5-percent contingency fund. Adding those costs brings the new school’s cost to nearly $8.3 million, while the renovation would cost an estimated $8.5 million. But Mulcahy says adding in an estimated $1.1 million fee for demolishing the old school pushes the cost of the new school construction project to nearly $9.4 million.
District 186 spokesman Pete Sherman says the district has revised its plans for the new Enos school to make it 3,360 square feet smaller, which reduces the estimated cost to $8.95 million after demolition, design fees and contingencies. Because state law requires new school building projects to be equivalent in square footage if funded with health-life-safety bonds, the district plans to increase the size of the Matheny-Withrow project by 3,360 square feet.
Mulcahy also dismisses the district’s revised estimate, saying costs like asbestos removal, paving and sewer relocation haven’t been adequately factored in. Mulcahy collected estimates for those costs from Springfield contractors, which he says would add more than $1.4 million to the district’s $8.95 million estimate. Mulcahy points to a major sewer line that serves much of Springfield’s west side and runs right beneath the current school. He says demolishing the school could collapse the sewer, adding to the cost of the project. Sherman says the cost of sewer work and paving are already factored into the $1.1 million demolition and sitework fee.
Meanwhile, the district contends asbestos removal would add only $50,000 to the demolition estimate, while the same cost would be higher for a renovation plan. Mulcahy’s asbestos removal estimate, prepared by the Springfield office of St. Louis-based Thornburgh Abatement, puts the asbestos cost for demolition much higher, at $400,000. The difference in estimated costs centers on the unknown extent of asbestos in the current school.
Sherman said the decision to build a new school “ultimately is about what is best for students.”
“Even if the costs are essentially the same, building the best possible school for students with the funding available is always going to be what tips the scales one way or the other,” he said.
Mike Jackson, manager of the Preservation Services Division of the Illinois Historic Preservation Agency, says IHPA may play a regulatory role in the district’s plans if state or federal funds are used. Jackson says Enos Elementary, like many other buildings constructed before World War II, has the potential for many years of useful service.
“This is happening all over the state; we’re throwing away buildings that will last for centuries and replacing them with buildings that will last for decades,” Jackson says. “It seems cheaper to build new than to repair, but that does not include additional costs like demolition. There seems to be a disconnect and a prejudice toward finding a formula that supports new buildings.”
Contact Patrick Yeagle at pyeagle@illinoistimes.com.