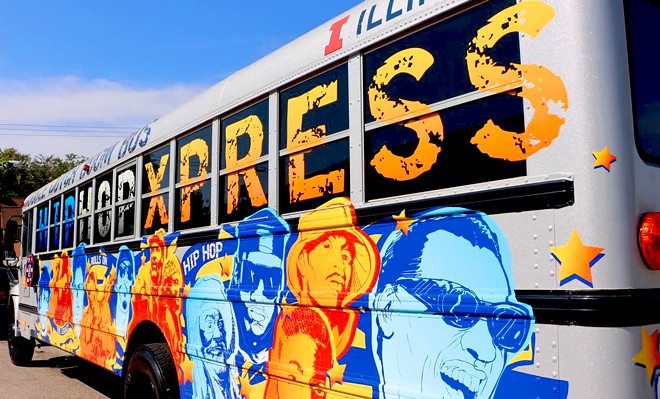 Photo by Blake Wood, UIS
The Hip-Hop Xpress is a mobile recording and production studio.

Performing arts are largely based on an "Anglo-Saxon, English perspective," according to Reggie Guyton, a Springfield-based performer, director and activist. Theater is especially Eurocentric, said Guyton – its origins are credited to the Greeks. Newer works, like the 2015 musical Hamilton, help de-center this perspective and broaden audiences, he said. The musical features performers of color, hip-hop and other modern genres to tell the story of the first U.S. treasurer.

Guyton spoke as part of an April 5 panel hosted by the University of Illinois Springfield (UIS) about the intersection of racial equality and the arts. He said leaders in the field should have ongoing relationships with diverse audiences to create inclusive performance art pieces.

"Ballet is seen by many as the epitome of dance in American culture," said Tiffani Saunders during the panel. She is a UIS African American studies professor and was recently elected to the Chatham public school board. She said she'd like people to consider jazz, Indigenous and tap dance as American dance styles with as much value as ballet.

When "classic" is elitist

Despite being introduced to "classical" violin and dance training as a child, Saunders hadn't questioned what the term "classical" signaled in performance art until later in her adult life. As a professor, she decided to build a class based on that question. Dance is a cultural product. It is shaped by class, gender, ethnicity and tradition. And because of this, Saunders said, ballet "should be understood as an ethnic or folk dance of Europe." She also teaches about the ways dances and music have been used in history. Tap dance, for example, was an encrypted way for enslaved people to communicate. Jazz dance and music are rooted in African American spirituals and celebratory traditions.

Acknowledging and valuing this history helps build a picture of American performing arts that is more inclusive than it has traditionally been, said Saunders. While ballet is a European dance originating in the courts of kings and queens, there are other forms of dance that can be considered classic American forms. Saunders said in most schools the roots and utility of different kinds of performing arts like jazz or Indigenous dances are unfortunately "undiscussed and unexamined." The roots of music and dance genres have been all but ignored, especially in how we think about and teach dance in America. That says a lot about how race functions, according to Saunders.

During the panel, Guyton talked about his experiences as a Black community actor and focused on issues directors and arts organizations can ponder, like, how to build authentic relationships with the communities they want to serve. Guyton said leaders should also think about the level of interaction between their organizations and marginalized communities, as well as turnout for auditions and events.

He also suggested those spearheading projects should consider audience and participant age, race and gender, and whether an audience reflects a community's makeup. Guyton said the cost of attending and participating in productions can exclude people from certain identities. Offering discounts, prime seating and help with transportation can ensure a program is cast and presented in an equitable fashion.

He also urged art directors and boards to consider barriers to participation or attendance, such as access to child care. "When you give artists of color the ability to dream, they're able to visualize and produce content," said Guyton. When you give them the tools, access and space to also invite family, friends and communities, the outcome can be genuinely inclusive, Guyton said. Making these considerations, particularly before casting, promotes inclusion and can expand audiences.

Teaching students about normalized standards in American dance and history is one way Saunders works to "decolonize" performing arts. Saunders teaches about theories that explore underlying white and elitist hierarchies. In addition to her work at UIS, she is a co-founder of Hip-Hop Xpress, a school bus turned mobile recording studio. The project is funded by the U of I. The bus is taken to underserved communities and its recording and production services are offered free of charge. "We figure out where there's a need and we park it in that community," Saunders said. "We have to bring in things that are familiar to youth." Offering relevant services gets youth excited and involved, she said.

Only when organizations take both an academic and community-driven approach to decolonizing the arts will people realize there's more to appreciate "than just the status quo," said Guyton. "There's more than just the traditional way of knowing things."