The new $4 million venue on the lakeshore 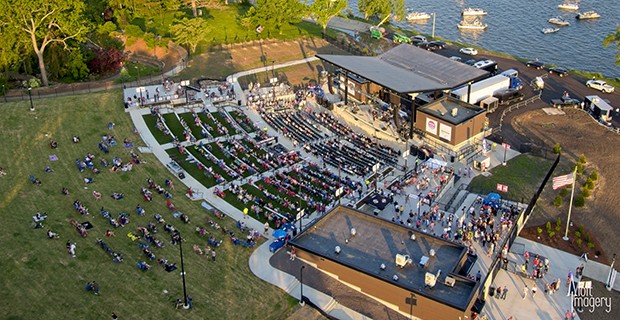 Photo COURTESY Devon Lakeshore Amphitheater
Plans for the 4,000-seat outdoor concert space had stalled until Decatur resident Howard Buffett said he would pay for it.

If you think there’s nothing to do in Decatur, I assume you’ve yet to visit The Devon Lakeshore Amphitheater.
Tucked away within the winding hills and plateaus that make up Nelson Park on the city’s east  side is brand new music venue that has reeled in thousands of attendees and a variety of performers during its inaugural season that kicked off in May.

When the sky starts to dim and the clock ticks closer to showtime, the nearly 4,000-seat facility quickly comes to life with people, food trucks and whatever entertainment you could think of – whether it be music, like “Bohemian Rhapsody,” or yoga under the moon and stars.

The amphitheater, referred to by many as simply “The Devon,” was made possible by a $3.9 million donation to the Decatur Park District on behalf of Howard Buffett and his private foundation. The venue is named after Howard’s wife, Devon Buffett.

Howard Buffett, the son of billionaire investor Warren Buffett, is a Decatur resident, the former sheriff of Macon County. He has long been a financial supporter of various projects and initiatives in the city – including an extension to the train ride at Scovill Zoo and a “community care campus” that will aim to offer various social services such as drug treatment. Howard Buffet has donated $2 million to the city’s efforts to revitalize several aspects of its neighborhoods.

The park district had an interest in building an outdoor amphitheater by the Lake Decatur shoreline for years, highlighting it as an integral aspect of its overall plan to redevelop the shoreline into a recreational hub for Decatur that it called “Lakeshore Landing.” If you have time, check out the park district’s “master plan” for the lakeshore someday. In addition to the amphitheater, other completed aspects of the plan include new boat docks and a promenade along the shoreline, a mini-golf course, ropes course and a soon to be completed water park.

But as for the amphitheater, whatever momentum that the park district had gathered in its efforts to build it stalled in 2015. A state grant that was supposed to fund the project became unavailable after former Gov. Bruce Rauner succeeded Pat Quinn in office. Quinn’s office didn’t give necessary approval to the grant before the transition, and eventually Rauner froze all state grants to park district projects. That’s where Buffett comes in.

With the city of Decatur and the park district expected to share costs for engineering and professional services for the amphitheater, Buffett in 2016 announced that he would fund its construction at Nelson Park. Months turned into years after that announcement, and the portion of the park that was once home to a playground and parking lot was transformed into Decatur’s latest attraction.

Among those who have graced the Devon’s stage during its first season include “Back to One” singer Brian McKnight, the Chicago 6 – a band made up of former players on the Chicago Bears’ 1985 championship team – and Russian rockers Leonid and Friends.

September will likely bring the biggest crowds that the Devon will see this year, as country star Trace Adkins and “American Idol” winner Scotty McCreery will perform on Sept. 1 and Sept. 7, respectively. There will also be an assortment of other events before the venue closes for the fall, including the Millikin Decatur Symphony Orchestra, No Alternative and a screening of E.T. The Extra-Terrestrial.

As you can tell, a trip to the Devon might be in order. With an assortment of events that have had the potential to please a diverse array of audiences, it’s easy to see why people have taken to the venue so quickly this year.

Jaylyn Cook is a lifelong Decatur resident. When he’s not writing, he’s either at the movies or out to eat.