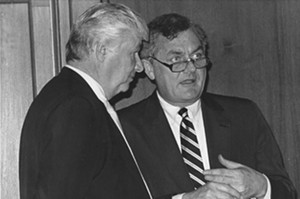 Philip J. Rock, 78, former president of the Illinois Senate, died Friday, Jan. 29.  Rock, a Democrat widely regarded on both sides of the political aisle as a statesman, was an effective senator for 22 years partially because he worked with members of the opposite party and was not averse to compromise to enact legislation, a phenomenon missing recently under the Statehouse dome.

Bill Holland, who was Rock’s chief of staff from 1983 to 1992, said, “Sen. Rock had a tremendous ability to convince and persuade people. Every day Sen. Rock and Sen. Philip would talk about what would happen that day at the Senate. The beauty of it was that they worked together collaboratively, and everyone was treated fairly.

“That was the way Rock handled the Senate. He was respected then and is respected even more now.”

Rock was also a remarkable speaker. “When Phil Rock talked, people listened,” Holland said. “He changed votes with his oratory.”

“He was the most articulate orator of anyone I’ve ever served with, a talent he told me he learned in the seminary,” John Cullerton, current Senate president, told the Daily Herald newspaper last week.

As staff photographer for the Senate Democrats in 1989, I would often stop what I was working on in my darkroom and just listen to Sen. Rock speak on behalf of a bill.

Dave Gross, who served as director of legislative services for eight years under Sen. Rock, remembered him as “a human fulcrum point – a balancing point for so many years.” Gross said Rock accepted leadership of the Senate during a time when a Republican governor (James Thompson) tried to deny him the Senate presidency.

“He really was special, a real statesman,” Gross said. “He took hits from both sides of the aisle. He could be a fierce partisan, but he never got personal. He always did the people’s business.”

Gross characterized Rock as a mentor and friend to staff. “He was a genuine human being. He would forgive and forget,” Gross said.  “He was the rarest of politicians. And one of the greatest orators I ever saw speak on the Senate floor. He actually changed some senators’ minds on issues.”

He was thoughtful, kind and generous, Gross said. “He loved his family, staff and people in general. He was very kind to me,” Gross added.

Cullerton said that Sen. Rock was unafraid to take unpopular stands for equality and justice. “After his retirement from the Senate, his commitment to sound and compassionate policy continued through his work with higher education and advocacy for Illinoisans with disabilities,” Cullerton said.