The Illinois Auditor General recommended a sweeping list of changes for the state's Department of Children and Family Services in regards to LGBTQ youth. The audit released earlier this month found the agency failed to comply with best practices – such as identifying youth in care who are LGBTQ and ensuring they are placed in homes that affirm their sexual orientation and gender identity. It includes information from 2017 to 2020, with department responses from this year.

"DCFS is not meeting the needs of LGBTQ youth in care as required by its own policy. We regularly hear from youth about the lack of basic respect for their identity as well as the challenges they face accessing affirming medical care," Ghirlandi Guidetti, staff attorney with ACLU of Illinois, said in a statement addressing the audit.

The auditor general was tasked with identifying how many LGBTQ kids and teens were under the care of DCFS and the number of providers deemed "clinically appropriate" to care for them. But the audit found that DCFS "does not collect sufficient information regarding whether those in care are LGBTQ."

The audit also found that the department had not ensured that caseworkers reviewed the Foster Children's Bill of Rights Act with youth, as required by law. The bill of rights includes that youth should be afforded "caregivers and child welfare personnel who have received instruction on cultural competency and sensitivity relating to and best practices for serving lesbian, gay, bisexual and transgender youth." According to the audit, LGBTQ competency training had not happened comprehensively in recent years.

James McIntyre is the former president of the Foster Care Alumni of America's Illinois chapter, and a current board member for the advocacy organization. "As a former youth in care myself, who also happens to be gay, I have experienced a number of these issues firsthand," he told Illinois Times. McIntyre was in and out of foster care for much of his youth, until 2012.

LGBTQ youth are overrepresented in child welfare systems. But they are underreported due to fears that they may face harassment and abuse if their identity becomes known, according to a U.S. government website focused on youth programming.

McIntyre said he had stayed closeted as a youth – being out was "seen as a safety risk" – but he was still the victim of sexual harassment, abuse and bullying. He said the thought that staying closeted would prevent attacks proved untrue. "I needed additional services," said McIntyre. "As a young queer man, there were questions, and I didn't have anywhere that I could turn." McIntyre had advocated for the 2019 resolution that called for the audit.

The report that resulted also found that DCFS left the position of LGBTQ coordinator vacant for more than a year, between September 2017 and October 2018. Then, "In June 2020, the department eliminated the LGBTQ Coordinator position and split the responsibilities between two offices."

The auditor general recommended DCFS use a "single case management system for all youth in care" and electronically track "clinical referrals, which would include LGBTQ referrals." Other recommendations have to do with training, handling complaints, the child/caregiver matching process and more. There are 16 recommendations in all.

Within the audit, the department responded to findings with ways it had addressed problems, or planned to do so. In a statement, DCFS said that under current leadership, it has "taken aggressive measures to improve the services and care provided to LGBTQI+ youth since the time period covered by this audit."

State Sen. Julie Morrison sponsored the resolution that led to the audit. She said LGBTQ youth in state care are disproportionately likely to become homeless and deal with mental health problems. She said part of ensuring kids who are wards of the state are safe means placing them in an "understanding environment that accepts them and supports them for their authentic self." Morrison told Illinois Times she plans to hold a subject matter hearing in the Senate Health Committee to question representatives of DCFS about the findings.

McIntyre said he has "so much respect" for Morrison and other legislative allies. But, "As an advocate and as a former youth in care, I am tired of attending these hearings, testifying at these hearings, and nothing changing," he said. "Children in care cannot afford to listen to a hearing that doesn't go anywhere. We need action and we need action immediately." 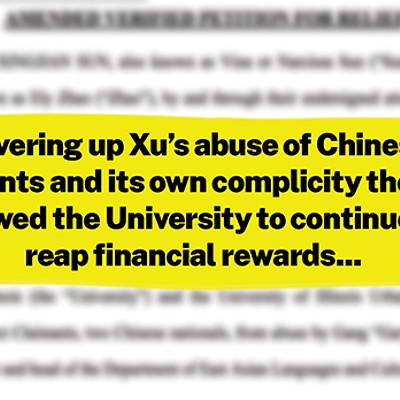