Rauner wants to give ailing Illinois a dose of California 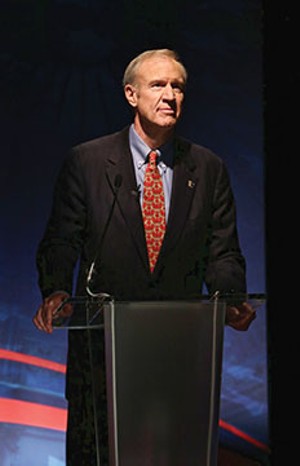 I speak of Rauner’s proposal to (quoting him) “freeze property taxes, and require voter approval for politicians to raise ’em.” The idea is a sideshow in a campaign that so far has been all clown acts. It is appealingly simple-minded and oddly maladroit. Rauner’s Freeze-My-Taxes website says, “Nothing strikes at the core of middle class families more than property taxes.” In the suburbs, to which Rauner must look for his victory, nothing sustains the middle class more than property taxes, since they largely support schools that the middle class look to as agents of the perpetuation of their wealth and their class.

Oh well. Rookie candidates must be expected to make fools of themselves now and then; it’s part of their charm. Let us take up instead the fiscal merits of Rauner’s property tax cap. California, you might recall, tried this gag 40 years ago. House owners’ taxes were going up because the value of their property was going up every year. To this day I don’t understand why this is bad, but unearned speculative wealth did put a lot of geezers who were house-rich but money-poor in a cash squeeze.

Such voters became fed up with the state legislature’s failure to wave a magic wand and give them tax relief, so they did it themselves via initiative in the form of the famous Proposition 13, adopted in 1978. Among many other provisions, Proposition 13 required that real property be assessed for tax purposes at its 1975 value, after which annual assessment increases would be determined not by market prices but by inflation, which could not exceed 2 percent per year.

Never was an attempt at government by the people more aptly labeled. Proposition 13 proved unlucky in every way for California. Insanely complicated to implement, the measure introduced new inequities, new costs and new inefficiencies. Probably the worst effect of capping local property taxes in this way was the gutting of California schools; that state in the 1960s had arguably the best local school system in country, and within a generation it was among the worst. Libraries and parks went to hell too. Because the locals lost their ability to tailor local tax rates to local preferences, it was the state government that decided who got what, in the form of the block grants that Sacramento provides to cities to provide essential services – and which helped drive state government close to bankruptcy.

We can’t say for certain which of several possible fiscal effects the Rauner tax freeze might have, or how bad they might be. That’s because Rauner – who wouldn’t think of buying a company before counting the toilet rolls in the company johns – is asking voters to endorse a plan that isn’t in fact a plan. He has not stated whether he means to achieve his cap on taxes by freezing the levy – what local governments ask for – or the rates at which assessed value is taxed for various purposes, or the assessed valuations themselves.

In short, the Rauner property tax freeze is pure moonshine, laughing gas, a fairy tale only a child (or, apparently a homeowner) would believe. But while the proposal is deeply unserious as a cure for the problem it purports to fix – that cure is to raise state taxes enough to pay its share of school costs – it is very serious as a harbinger of his larger agenda for Illinois government.

Some Proposition 13 campaigners, such as the landlord clients of lobbyist Howard Jarvis, were just businessmen looking for a tax dodge. But many were rightists with a grudge, the real Founding Fathers of the Tea Party movement. Local California government by the 1970s was educating great numbers of brown and black schoolchildren and building for them libraries and clinics. Such undertakings rendered local government illegitimate in their eyes. These backers did not wish to defund local government because it was wasteful or extravagant, but because it was, in a society that they had built but which had suddenly become – and in their opinion disastrously – beholden to Them.

Bruce Rauner’s reasons for believing any government that takes his money is illegitimate are apparently ideological rather than racist. (To him, “Them” are career politicians and public union members.) That makes him less vile than the worst of the Prop 13 agitators, but no less unwise. Like the organizers of Prop 13, Rauner is deeply ignorant of how government works. That is not a disqualification in his eyes; knowing how to run a government matters only if you believe that governments ought to be run, and Rauner does not.