Phil Luciano, perhaps Illinois' best newspaper columnist, hung up his fedora at the Peoria Journal-Star and left the newspaper business.

I've known Phil for 35 years and have long admired his writing. We were once classmates in a graduate program at Sangamon State University back when "Big Jim" Thompson was in the Governor's Mansion and Ronald Reagan in the White House.

He's spent the last 34 years writing for the Peoria Journal-Star and now is working for the local public television affiliate. I'm happy for my friend but sad to see another columnist's byline disappear.

Luciano left the paper about three weeks ago. Unfortunately, departures like his are all too common in the newspaper business. In the last year alone, the faces of Mary Schmich, Dahleen Glanton, Steve Chapman, Heidi Stevens, Eric Zorn and John Kass have disappeared from the Chicago Tribune.

In 2020, Bernie Schoenburg and Doug Finke retired from the State Journal-Register and Chuck Sweeney of the Rockford Register-Star died. In 2018, Bill Wundram ended his tenure at the Quad-City Times.

The financial troubles of daily newspapers are not a secret. Papers have had to cut back to stay afloat. Staff cuts are never pretty, whether done with buyouts, layoffs or natural attrition. 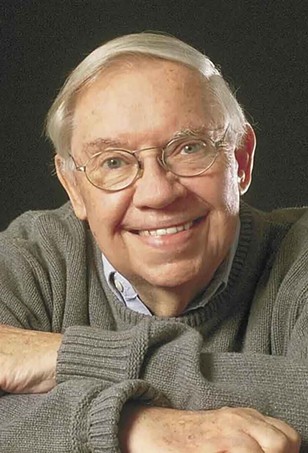 "Newspaper editors, publishers – whoever makes those decisions – see columnists or columns as a luxury that they can't afford anymore. I think that that's unfortunate," Luciano said in an interview.

Local columnists are sinews that bind a community together and build loyalty with a newspaper's readers. But they are disappearing.

He was a master of his craft. He wrote seven columns a week for almost four decades. His name and face became synonymous with the newspaper. When I was a young reporter working with him, folks across the community would ask me if I knew Wundram.

Back in the day, his advice to young reporters like me was straightforward: "There is no news in the newsroom."

In an interview Feb. 13, Wundram added, "It's very difficult to get anything, just sitting at a desk. You have to work and talk to people: little people and big people. Funny people. All shapes and sizes. And I deal greatly with people."

And I should add, a good columnist should occasionally make readers uncomfortable.

Wundram said he remembers standing by the graveside of a local soldier being buried during World War II (He started at the newspaper in 1944). No one else from the community showed up for the burial.

He wrote a piece shaming the community for failing to honor a local son who had made the ultimate sacrifice for his nation.

Peoria's Luciano said a columnist is in a position to make change.

"If you are going to bat for someone, the goal shouldn't always be to raise a ruckus – or blow things up. It should be about finding a way to help people. ... A columnist, if he is doing his job, should be out talking to ordinary Joes and Janes and be their advocate."

When I talked to my friends Phil and Bill, it was clear that column writing was their calling. It was what they were meant to do with their lives.

I've been writing a weekly newspaper column for about 20 years. At first, it wasn't something I really wanted to do. But Jerry Taylor, the former publisher of The Daily Dispatch and Rock Island Argus, was persistent. At first, he suggested I write a weekly column. I told him I wasn't interested. I liked writing straight news pieces and had no desire to write opinion. He kept needling me and I kept demurring. Finally, he ordered me to write a weekly column.

I didn't like writing it at first. But he was a good teacher, and slowly, what I once viewed as a chore became a favorite part of the job.

His newspaper columns dripped with sarcasm and wit. He was always fighting for the underdog and sticking it to those in power. His columns brought to light corruption in Chicago City Hall, the Illinois Capitol and various places across the map.

But the most important thing he did was give voice to the voiceless.

When I was in college, I remarked on how much I loved the Des Moines Register's opinion page and my father, who was a bit of a curmudgeon, huffed, "What's the point of an opinion page?

I replied that it was to expose people to various points of view. To this day, I love reading columns from across the political spectrum. Why? Well, it's important to understand differing opinions and every once in a while, I'll read something so well-reasoned that I decide to change my viewpoint.

We now live in a Fox News/MSNBC society where increasingly people are choosing to only pay attention to commentary they agree with. What's the point of that?

I, for one, love to read a newspaper opinion page with a variety of views. Good columnists may not get you to change your mind, but they can get you to think.

And in an increasingly thoughtless society, can we ask for anything more?

It runs in the family