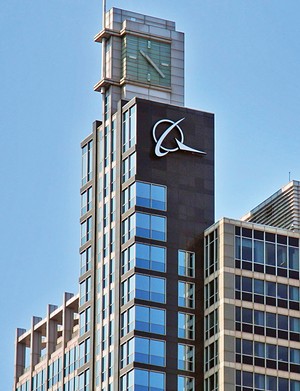 Illinois' 20-year dalliance with Boeing came to an end this month, with the corporate behemoth announcing that it is picking up and moving from Chicago to a Washington, D.C. suburb.

It was a shameful relationship from the start. Taxpayers at the local and state level paid the airplane manufacturer $60 million to move its corporate headquarters here in the first place.

The company brought 500 jobs to Chicago when it moved here from Seattle in 2001. That means taxpayers dished out $120,000 in tax breaks for each job. And once the incentives ran out, the company decided to up and leave the Land of Lincoln.

Some say politicians are buying jobs when they offer corporate fat cats incentives to move here. Sorry, that interpretation is way too generous. At best, we are renting the jobs until the incentives run out.

These corporations are adept at playing state against state and city against city. Back in 2001, Boeing made Dallas, Denver and Chicago bachelorettes No. 1, No. 2 and No. 3. They each groveled to see who might attract the aerospace behemoth.

And they found out in a PR stunt.

A Boeing 737 loaded with corporate suits sat on a Seattle runway in 2001 and the pilot had charted routes to Denver, Dallas and Chicago. Most folks aboard had no idea where they were going until the plane was airborne.

It landed at Midway International Airport where a formal announcement was made. The city's newspapers embarrassed themselves. If memory serves, one ran a banner front page headline something like, "Chicago, a Boeing kind of town."

All rationality had gone out the window.

While Chicago ended up the "winner," one has to ask if any city truly ends up on top when it engages in such bidding. Instead of being a suitor putting its best foot forward. Illinois and the Windy City came off like a john waving the biggest wad of cash.

A recent Chicago Tribune editorial bemoaned the city's loss of status as yet another corporate headquarters disappeared from its downtown.

And Fortune 500 companies are favorite targets of government largesse. Why? Well, it burnishes a politician's reputation when a corporate nameplate gets bolted to a building in their city.

It's also a "government-knows-best-mindset" that serves neither the taxpayer nor the economy well.

Folks on the left call it corporate welfare; on the right, they call it crony capitalism. Let's just call it what it is: shameful behavior.

The best way to help businesses in Illinois – and any state – is to improve the state's overall business climate. This means doing things like ensuring its workforce is well-trained and its taxes and regulatory environment are competitive.

But politicians like to cut ribbons and claim credit for the jobs they "brought" into the state. And incentives have become their means of branding their accomplishments. They are also lousy prognosticators on where to invest the state's money.

Back in 2011, Illinois and local governments put together a $250 million incentive package to keep Sears' headquarters in Hoffman Estates.

Today there are about 23 Sears stores left in the country and none in Illinois. The 243-acre corporate office park will soon be sold. It just goes to show you, no matter how much money government throws at a poorly managed business, it can't keep it from going under.

Not so long ago, outfits like Dell, Amazon and Microsoft Corp. were tiny startups. Now they are corporate giants.

Instead of paying big bucks to prop up or pay off established companies, why not grow our own?