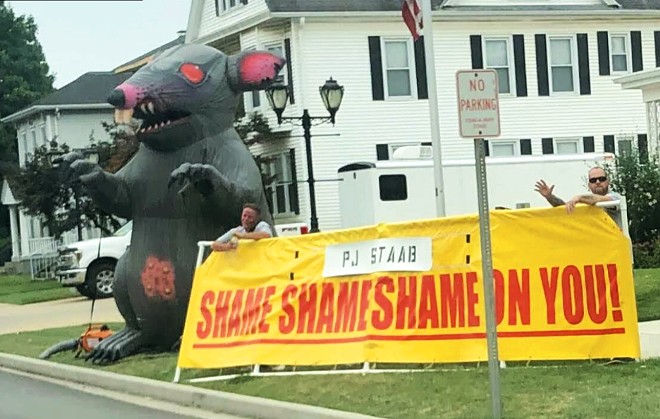 There is little sympathy for a rat.

On July 25, a giant, inflatable rat rose 15 feet in front of Staab Funeral Homes in Springfield, and a woman came out of the business and repeatedly stabbed the rodent with a knife.

The rat is intended to call public attention to companies employing nonunion labor.

John Nicks, business manager for Roofers Local 112, said he and two of his union brothers – and Scabby the rat – were well within their rights protesting outside the venerable Springfield business that employed a non-union roofing contractor.

I can't argue with that.

The First Amendment exists to protect even the most offensive speech. In fact, if someone didn't find it offensive, there would be no need to protect it. But as my mother used to say, "Just because you can do something doesn't mean you should do something."

And this job action was stupid – really stupid.

Nicks portrays himself as just a working stiff protesting outside a funeral parlor. But even he wasn't prepared for how heated things became.

"She came out running, hollering and screaming and had a knife that was maybe four, six or seven inches long. I don't know what she was screaming, but she was screaming, and then she stabbed the rat eight times – in the back," he told me in a recent interview.

One of the picketers called the cops and the woman returned to the business.

The 911 call went like this: "We're union workers, and we are kinda protesting here because there is nonunion here. And a lady came out of Staab's and poked a hole in one of our rat things or whatever. They are getting kinda nasty, and we have all the right to be here."

He added the perpetrator was wearing a "leopard top."

Meow. You just can't make this stuff up.

A police report said funeral director Lauren Staab, daughter of the firm's president, Paul John Staab II, admitted to the attack. Neither of the Staabs would comment on the matter for the record. She has been charged with criminal damage to property.

When I wrote a news story on the incident last week, I received emails and comments from across the United States. The victim – Scabby, the now-flaccid rat – received no sympathy.

Lauren Staab, on the other hand, may be on the way to folk-hero status.

I should note that the Staabs buried several of my in-laws. And I've attended a number of funerals there and always found them to be dignified and professional.

They are just nice folks.

When I was 10, my family's small business was picketed by a union. We'd hired union carpenters to put on an addition. It seems the carpenters were carrying their own boards. So, the laborers' union picketed because they thought they should be carrying them.

Being a rather nosy child, I walked out front and asked the fellow picketing why he was there. He said, "Unfair labor practices, kid."

I asked what was unfair? The fella wouldn't make eye contact, but did tell me to call the union hall. I couldn't help but wonder if he knew why he was picketing.

After all, orthodoxies demand blind obedience. Instead of taking a nuanced view and noting that the Staabs have employed union contractors in the past and have contributed much to the community, the roofers union chose to brand them as "shameful" and target them for a picket.

What do they hope to accomplish? Maybe someone will drive down the road, see the picketers and say, "Mom, when you kick the bucket, we won't have your funeral at that place with the giant rat."

I suppose it could happen. But I kind of doubt it.

A more likely scenario is that the union will reap nothing but ill will. Instead of the champion of working people, it came off as a bully picking on a family business.

Increasingly, rank-and-file union workers are uncomfortable with these actions. They may not be voicing their misgivings in the union hall, but they are voting with their feet.

Unions are finding it hard to get workers to participate in job actions like the one with Scabby. Thestreet.com has reported some labor organizations have resorted to hiring nonunion temporary workers at minimum wage to work their picket lines.

John Nicks, of the roofers union, acknowledged that some unions "play that game," but not his.

All the same, whenever I see folks suffering out in the weather on a picket line, I can't help but wonder, "Are those temps? And is the union paying them prevailing wage?"