Pot is going mainstream in Sangamon County, where three growing operations are under consideration by state and local regulators, including one that would have an elected official as an owner.

Jeff Fulgenzi, a trustee of Lincoln Land Community College, is listed as a manager of a limited liability corporation that wants to convert The Gym at 1823 Camp Lincoln Road into an indoor pot farm. J. C. Dowson, Inc., which is domiciled at the same address as Dowson Farms in Divernon, according to Secretary of State records and the Dowson Farms website, is one of three managers of Cyclone Labs LLC that this week won approval from the Sangamon County Board to build an indoor pot farm on land between the 3100 and 3500 blocks of Cockrell Lane. Dowson Farms is one of the state's largest corn growers. 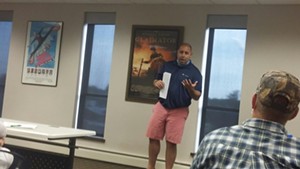 Photo by Bruce Rushton
Chris Stone, who's been in the pot biz for years, pitches a Pleasant Plains grow operation to a skeptical audience.

Fulgenzi refused to answer questions about plans for The Gym, which Rt 66 Rec LLC, of which he is a manager, would purchase for $1.25 million if the county board grants approval and the state issues a license. "Until there's a license awarded, there's no point in putting me or my family's name or my partners' names or anyone else in the newspaper," said Fulgenzi, whose wife serves on the county board and whose father is a Springfield alderman. Fulgenzi, a former county board member, worked at the county planning commission for nearly eight years before taking a job at the state Department of Employment Security in 2016. He left that post earlier this year.

Chris Stone, who is pushing both projects as well as a proposed pot farm that would be housed in Stone Seed buildings near Pleasant Plains on Illinois 97, said that Dowson Farms, which returned $5.4 million in federal farm subsidies in 2014 to end a criminal investigation, will not be a manager of the Cockrell Lane project approved this week by the county board. "We will be changing that," Stone said. Darrel Thoma, a manager at Dowson Farms, says that he is the landowner for the Cockrell Lane project and that neither Dowson Farms nor J.C. Dowson Inc. will have a role. The application submitted to county zoning authorities and approved Tuesday by the county board shows that W.J. Sallenger LLC, based in Glenarm and formed last year, is the property owner. Thoma did not immediately return a phone call to clarify why the county application lists the Glenarm group as property owner.

Ben Call, who is a manager of the limited liability corporation that won county approval for the Cockrell Lane projet, says that he's a passive investor and doesn't know the names of others in the entity that was granted zoning approval. “I daresay I’m along for the ride,” he said.

Stone said that all three of the proposed Sangamon County facilities qualify as social equity projects, meaning that they will get bonus points when the state scores applications, with 40 licenses due to be awarded statewide in the first round of approvals. The state has received more than 475 applications for facilities, and Stone says he believes that the first licenses all will go to social equity applicants. He is pushing 13 grow proposals throughout the state that he said might eventually become a cooperative. For tax purposes, the facilities will be owned by one entity and leased by another, Stone said, with some people owning portions of both entities.

"For all of these applications, they are social equity applicants that meet the true definition and intent of the law," said Stone, a co-owner of Ascend Illinois who's owned pot businesses in the state since medical marijuana was legalized in 2013. During a meeting last week with nearly two dozen neighbors of the proposed Pleasant Plains operations, Stone said that the facility would hire as many as 36 people, including many minorities, and pay an average wage of $51,000, with opportunities for employee ownership.

The state was supposed to award licenses on July 1, but says that the pandemic has slowed the approval process. Stone during last week's meeting said that he expects the state to issue licenses by Sept. 1, a date that Krista Lisser, Department of Agriculture spokeswoman, said she could not confirm. The state, she said, has no solid timeframe for issuing licenses to grow pot.

Successful applicants will be allowed to grow up to 14,000 square feet of pot under current law. Stone told neighbors of the Pleasant Plains proposal that he expects the state will change the law to allow 24,000 square feet due to shortages that have plagued the pot industry since recreational marijuana became legal on Jan. 1.

Neighbors in Pleasant Plains said they're worried about smells and appearances, particularly at night when security lighting would illuminate the building's exterior. Applications for state licenses that include ownership information are exempt from the state Freedom of Information Act. Stone told neighbors of the Pleasant Plains project that prospective owners who have an option on the property are two women employed in the health care industry. He said they want anonymity because marijuana is illegal under federal law.

"They need to identify themselves and be accountable if there's an issue," one man said. "Common sense says you don't invest in a business that's illegal. Is that what you're telling me? These women have no common sense?"

Days later, Stone confirmed that the owners would be Jackie Conder of Springfield and Louella Murray of Peoria, who are listed as managers of Lincoln Labs LLC, the county zoning applicant, in Secretary of State records. Cyclone Labs LLC, which won zoning approval this week for the Cockrell Lane property, includes Call, Adam Springer and Richard McCormick, in addition to J.C. Dowson, Inc., as its managers. Rt. 66 Rec LLC, which wants to convert The Gym into a pot farm, has Fulgenzi, Gary Alexander, Sonny Day and Bret Hahn as managers.

This story has been updated after Darrel Thoma contacted Illinois Times, seeking clarification to ownership questions.