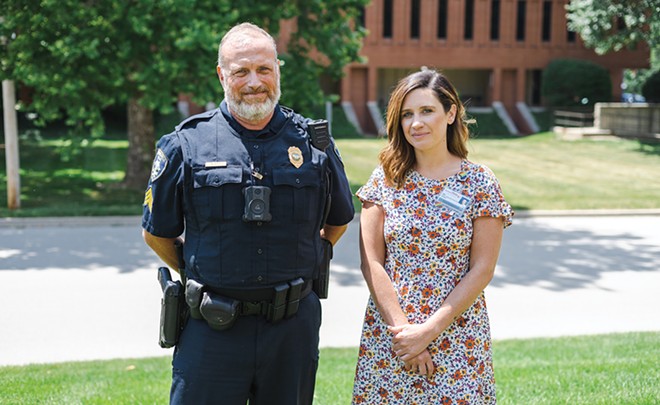 A 59-year-old Springfield woman described her life as "pure hell" before a community outreach worker from Memorial Behavioral Health helped her 40-year-old son get medication and counseling for his bipolar and schizoaffective disorders.

"Ever since then, everything has been much better," said the woman, who operates a nail salon and asked to be identified only as Ashley.

The woman's son, who lives with her in an apartment and was unemployed, increasingly was having emotional outbursts and threatened her with violence.

Police who were called to the apartment several times but never made any arrests, made use of the Springfield Police Department's co-responder program, in which mental health professionals are dispatched later to look into ways of preventing violence and entry into the criminal-justice system.

In the program, a partnership between the Springfield Police Department and MBH, the professionals use de-escalation techniques and try to get people treatment they may have found difficult to access otherwise.

The program's use of part-time mental health specialists will expand this fall to two full-time specialists who will ride along with police as they respond to calls. The expansion will be funded by a three-year, $532,492 grant awarded in January by the U.S. Department of Justice.

The program is expected to expand further through a bill signed into law by Gov. JB Pritzker in May creating the Co-Responders Pilot Program statewide. The state's budget for the fiscal year that began July 1 allocates $10 million for pilot programs in Springfield, Peoria, East St. Louis and Waukegan.

It's still unclear how much money the Springfield program will receive as a result of House Bill 4736, according to state Rep. Sue Scherer, D-Decatur.

"When law enforcement and social-service agencies work together, our communities are safer and better supported," she said. "The Co-Responders Pilot Program will help vulnerable residents get the support they need while helping law enforcement police in a way that is both safe and compassionate."

Before that, Southern Illinois University School of Medicine worked with Springfield police to operate a temporary program.

MBH specialists such as Jamie Riedle, who assisted Ashley's son, meet with clients and their families, who tend to be in poverty and may have needs beyond mental health, such as food insecurity and transportation challenges, Anderson said.

"We literally and figuratively meet them where they're at, providing immediate crisis stabilization in addition to linking to ongoing resources to maintain stability in the community," she said. "We serve the complex cases."

Anderson said she has seen the program's interventions reduce homelessness, unnecessary hospitalizations and the need for police to be involved in clients' lives.

The need for the program has only grown during the COVID-19 pandemic, which has resulted in more stress and anxiety for everyone and especially those with mental illness, she said.

MBH has been working to bring mental health services to everyone, especially those in crisis, Anderson said. Mobile Crisis Response, an MBH program, recently expanded services to include both adults and children in Sangamon, Menard, Morgan, Scott, Logan, Mason and Christian counties.

Schools, police or members of the public who call the MCR team at 217-788-7070 can obtain telehealth or an in-person response to a crisis, officials said.

MBH could see increased demand due to another innovation – a national health emergency 988 referral number similar to 911 – that is scheduled to go live on July 16, Anderson said.

Anderson said: "Police officers are often the first point of contact for those experiencing a traumatic event or a behavioral and emotional crisis or emergency. This partnership will allow our trained mental health professionals to assist our officers and community quicker, with a goal of creating a more sustainable pathway to support and treatment."

Being able to have MBH specialists respond alongside police will make the co-responder program even better.

"It allows us to be there in the moment," she said.

"We like to think of ourselves as problem-solvers, and this gives us the resources to solve the problem," he said.

Ashley said her son was taking medicine in Turkey that helped to manage his mental health conditions but stopped taking the medicine after he moved to America.

She said she didn't know how to get her son help until Riedle stepped in. She helped connect him with an SIU psychiatrist, who prescribed medicine that has been effective.

Riedle also linked the man with the Illinois Department of Human Services' Division of Rehabilitative Services. The state helped him get a job with a cleaning service that he said he enjoys.

Ashley said her son's demeanor is much more stable, leading to less anxiety for him and for her.

"He's back on track," Ashley said.

She said she considers Riedle part of her family, and she is grateful for the help from MBH, SIU and the police.

"God sent them here," Ashley said. "I really believe God has a plan for everybody."