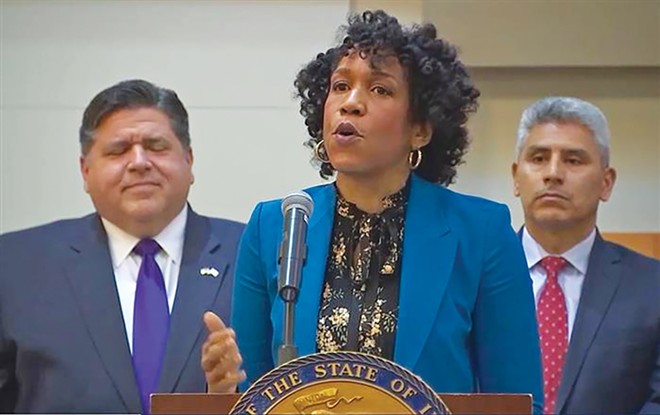 Pritzker and Lt. Gov. Juliana Stratton, both Democrats, laid out their plan at a news conference at Kennedy-King College. Stratton said real justice reform in Illinois will require more than just policing prisons.

"Justice reform is about striving to make equity and economic opportunity a reality for every community and every Illinoisan, because we simply cannot have justice without equity and opportunity," Stratton said.


Stratton spearheads the Justice, Equity and Opportunity Initiative, established by a Pritzker executive order last February to study the subject. She submitted a report to the governor this month outlining goals of the initiative.


Those include addressing social determinants of crime and incarceration; improving equitable deflection and diversion opportunities from the justice system; improving conditions and addressing the needs of vulnerable populations in correctional facilities; and supporting positive re-entry outcomes to reduce recidivism.


The Jan. 9 announcement comes as state's attorneys throughout Illinois are initiating the process of expunging thousands of low-level stand-alone marijuana offenses in compliance with the state's adult-use legalization law.


"Those two things will have, I think, a significant impact on incarceration, on reducing incarceration in jails and in prison," he said. "We have a prison population of 40,000 in this state, we can reduce that and we can do it prudently."


Pritzker said "pieces" of the legislative effort will be introduced this session, which begins in late January and is scheduled to conclude in May.


The Illinois economy grew at a slower pace than most neighboring states and the nation as a whole during the third quarter of 2019, according to new figures released last week.


The U.S. Bureau of Economic Analysis, which tracks state-by-state economic trends, said overall, the state's economy grew at a modest annualized rate of 1.4 percent, well below the national rate of 2.1 percent.


Illinois ranked 41st in the nation for GDP growth during the quarter, according to the data. Texas showed the fastest-growing economy, at nearly 4 percent, while Delaware came in last with no measurable growth.


The biggest area of growth during the third quarter came from the professional, scientific and technical services category, which accounted for nearly 9 percent of Illinois' GDP during the quarter. That sector grew at an annualized rate of 5.8 percent, which translates to nearly $1 billion in economic activity compared to the previous quarter.

Production of Illinois' two most valuable crops fell by roughly one-fifth last year, according to final crop yield numbers released Jan. 10, by the U.S. Department of


"We had the latest-planted corn crop at least in my history of 30 years as an ag economist here" because of record-breaking spring rain, Doherty said. "I've never seen anything like it."

Sex education in Illinois middle and high schools would be required to include a discussion on sexting if a bill introduced in the state House of Representatives becomes law.


House Bill 4007, introduced by Rep. Maurice West, D-Rockford, would require sex education curriculum in grades 6-12 to include material on the legal and social risks of sharing sexually explicit images, messages and videos.


"This is something that a lot of our students are dealing with and are partaking in without really understanding what the consequences could be," West said.


Issues surrounding sexting that would be required in curriculum include long-term consequences, bullying and harassment, resisting peer pressure and using the internet safely. Lessons would also have to highlight school and community officials who students can reach out to with a problem.


"There's no telling what our children are doing on their phones," West said, "so instead of trying to intrude into their privacy, let's just make sure they're educated on even the things that make us adults uncomfortable."


The bill defines sexting as "sending, sharing, receiving, or forwarding a sexually explicit or sexually suggestive image, video, or text message by a digital or electronic device, including, but not limited to, a mobile or cellular telephone or a computer."

The Illinois Medicaid program now covers medical procedures for people transitioning from one gender to another.


The Department of Healthcare and Family Services, the state's primary Medicaid agency, published new administrative rules that spell out the types of "gender-affirming" services covered and the conditions under which the program will reimburse providers for those services. The rules became effective Dec. 23.


The department announced in April that it would develop such a policy. Previously, Illinois specifically excluded what had been referred to as "transsexual surgery" from Medicaid coverage.


The procedures are available to people diagnosed with gender dysphoria, a recognized condition in which people experience distress or discomfort because the gender they were assigned at birth does not match the gender with which they identify. Researchers say it occurs in only a small percentage of all individuals.


Under Illinois' new policy, coverage is available to people over age 21, although it can be provided to some people younger than 21 if it's determined to be medically necessary.


Capitol News Illinois is a nonprofit news service operated by the Illinois Press Foundation that provides coverage of state government to newspapers throughout Illinois.