Now you can make your own

We've been traveling and living in our converted school bus since the start of the pandemic, often without Wi-Fi or a decent cellphone signal. For self-amusement (or just wanting to feel I'm doing something purposeful), I've probably spent close to 1,000 hours standing at my bus's kitchen counter engaged in cooking, baking and food preservation projects. When I'm not able to download a Netflix movie on our iPad or tune into NPR on my phone, my mind is left to wander and reminisce. I'm really craving nostalgic dishes from my youth, such as tuna noodle casserole or beef stroganoff... and lately, I'm embarrassed to admit, Pop-Tarts! I can still sing along with Milton the Toaster: "You can eat 'em in the park, eat 'em in the dark, eat 'em on a rollercoaster!"

Back when we were parents of young children, my late wife and I tried our best to hold our children up to lofty nutritional standards. Unfortunately they often felt embarrassed and deprived being sent to school with "healthy" sack lunches while their classmates enjoyed Lunchables and Twinkies. Being the children of a dentist, they knew soda and sugary beverages were strictly banned.

Deprivation often creates desire, and banned junk food becomes the forbidden fruit. When my late wife and I once traveled to Europe for a week, our friends Bill and Judy stayed with the kids and chauffeured them to and from school. Bill was a young dentist and Judy was a physician doing a residency in pathology. Because we were totally comfortable entrusting them with the well-being of our three children, it was a shock to find out that they were feeding our kids Pop-Tarts and Hi-C for breakfast. Their virgin palates had been corrupted! When I expressed my indignation, my daughter countered: "This is what Judy eats for breakfast and she's a doctor!" Nonplussed, I responded: "She's a pathologist! She works on dead people!"

Pop-Tarts turned 50 last September with annual sales reaching $845 million, and I'm still preaching: "Just Say No!" According to healthline.com, Pop-Tarts rank #1 on its list of "The 15 Unhealthiest Junk Foods in America," because they contain "highly processed ingredients, including soybean oil and refined flour, refined white sugar, corn syrup and high-fructose corn syrup." The processed food industry, which amped up production capabilities to provide non-perishable meals for the troops in World War II, needed new markets to support its expanded infrastructure. The same technology that was used to create Gaines Burgers, a semi-moist dog food that didn't need to be refrigerated, led to the development of Pop-Tarts.

With apologies, I present my homemade version.

Pop-Tarts are considered a "toaster pastry," and this recipe, though containing white flour and sugar, is a less-unhealthy version. Can they be baked in the toaster? Perhaps, if you've sealed the edges well, but don't toast for too long, because the tarts might leak.

For the pâte brisée (tart pastry):

For the jam filling:

In a large mixing bowl, combine the flour, sugar and salt. With your fingers or a pastry blender, work the butter cubes into the dry ingredients until the largest pieces are pea-size and the mixture holds together when you clump it. Whisk one egg with the milk in a small bowl and drizzle it into the dough, mixing just until everything is integrated. If necessary, knead briefly on a well-floured counter. The dough should be cohesive, but not wet or sticky.

Divide the dough in half, shape each half into a smooth rectangle, about 6 x 4 inches. Wrap each half tightly in plastic. Chill for at least an hour before proceeding. (The dough can be prepared ahead and refrigerated for up to four days or frozen for up to one month.)

Remove the dough from the refrigerator and allow it to soften a bit to become workable, about 15 minutes.

Place one piece of dough on a lightly floured work surface, and roll it into a rectangle about 1/8-inch to ¼-inch thick, large enough to be trimmed to 9 inches x 12 inches. Repeat with the second piece of dough. Using a bench scraper or pizza roller, section each piece of dough into nine 4-inch x 3-inch rectangles.

Beat the additional egg and brush it over the entire surface of half of the dough rectangles. Place a heaping tablespoon of filling into the center of each rectangle, keeping clear a 1/2-inch border. Place a second rectangle of dough atop the first, using your fingertips to press firmly around the pocket of filling, sealing the dough well on all sides. Press the tines of a fork all around the edge of each packet.

Gently place the tarts on a parchment-lined baking sheet. Prick the top of each tart multiple times with a fork to allow steam to escape. Refrigerate the tarts for 30 minutes, and preheat the oven to 350°. Bake until the crust is golden brown, about 20-25 minutes. Transfer to a wire rack and allow to cool before serving.

The baked pastries can be stored in an airtight container at room temperature for up to two days.

If you'd like to make them further in advance, freeze the unbaked tarts between layers of plastic wrap, and bake as needed.

Peter, Ann and Bertha Bus send greetings from a nearly empty RV park in Steinhatchee, Florida, where they are enjoying the solitude. 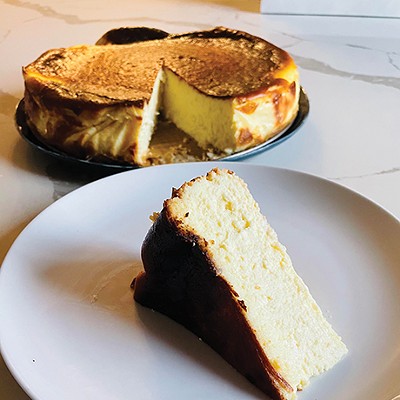