UIS on-campus students and faculty are getting tested weekly 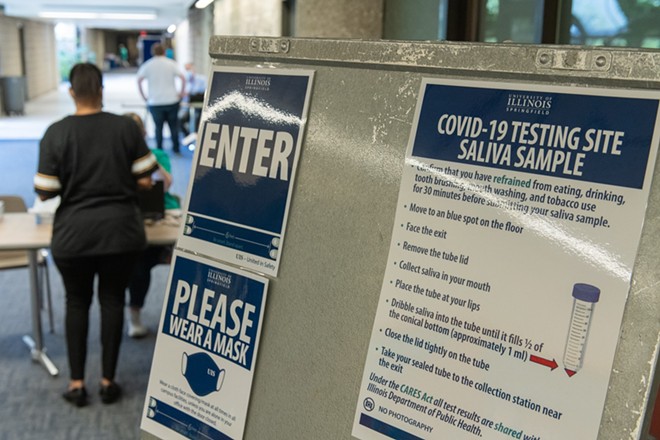 facebook.com/uis.edu
At UIS, staff and students on-campus must take COVID-19 saliva tests weekly. In late August, the testing results were delayed as a result of the lab getting backed up in Urbana-Champaign.

The University of Illinois is aiming to have its saliva tests used throughout the nation and world. The so-called Shield tests provide rapid results and were developed by researchers in Urbana-Champaign at UIUC. "Direct saliva testing can address bottlenecks of time, cost and supplies," said Martin Burke in a release. "Our test also has unique features that enable fast and frequent testing on a large scale, and we are now working together with many partners to make our testing method broadly available as soon as possible." Burke is a chemistry professor at UIUC and helped develop the tests, which are under FDA emergency authorization.

The tests are being used at all three U of I campuses, including in Springfield. The aim at UIS is to test weekly those who learn, live and work on campus. Testing, combined with contact tracing, provides a picture of where outbreaks are occurring and how to mitigate further spread. Interim UIS chancellor Karen Whitney has repeatedly described the coming school year as a roller coaster, and it's already proven to be true.

"The lab is slammed in Urbana, and we've had bumps in the road," Whitney said during an Aug. 27 UIS virtual meeting about COVID-19. The director of student support services explained the UIUC lab was backed up and not turning test results around within 48 hours as expected. That resulted in confusion for some over their test results. In the previous week's meeting, 10 on-campus COVID-19 cases were reported as well as two off-campus cases. The confirmed cases were "a reflection of our on-campus testing program and exactly why we've implemented it," Whitney had said.

On Aug. 28, the positivity rate for the week prior was .30% according to the UIS website. The daily positivity rate was higher, at .57%. The rate is the percentage of positive cases out of the total tests performed. UIS has established metrics for mitigation. Those start to go into effect when the daily rate for students living on campus is higher than .5% and higher than 1% for all staff and students learning and working on campus. The metrics also involve factors such as available quarantine space for students in dorms.

"UIS is not closing unless the governor or the system head directs me to. The question gets into how will we operate," Whitney told Illinois Times. Students and faculty who become ill will be dealt with on a case-by-case basis. Pauses in on-campus activity and a temporary shift to online learning for all are included as potential mitigation efforts. Meanwhile, about 80% of students are learning purely online according to Whitney. Those who attend in-person classes must wear masks and keep a distance from others.

On Sept. 2. the University of Illinois in Urbana-Champaign announced a two-week period limiting student movement to essential activities and said classes would have to shift to online-only and students would be sent home if cases continued to surge. A previous prediction by UIUC researchers of 700 or so cases by Thanksgiving had already been surpassed, with about 1,000 students testing positive since Aug. 16, according to Illinois Newsroom. New models show the number of confirmed cases could rise to 8,000 in the same timeframe.

In an email sent Wednesday, the UIUC chancellor, provost and student leaders blamed the uptick in cases on "irresponsible" students who had hosted parties and worked to circumvent mitigation strategies, such as by "actively avoiding our contact tracers." A fraternity had been placed on suspension and about 100 additional students and organizations face discipline, according to the email sent to undergrads. The email includes a webform that students can confidentially fill out to report "unsafe activities or behavior."

The email said the university has "identified more than 400 new positive cases since the first day of instruction, Aug. 24, and about twice as many individuals are currently in quarantine."

"The number of new cases we have seen in the past several days has been progressing at a rate that will double every seven days without the actions we are asking of you," the emailed statement said. "We stay together. Or we go home. It comes down to these next two weeks. It is up to you."


Across the nation, some colleges have quickly shifted to remote-only learning due to outbreaks. The University of North Carolina at Chapel Hill decided to transition to online-only classes after the campus positivity rate rose to 13.6% in the first week of classes. In Illinois, outbreaks have been monitored at Illinois Wesleyan University in Bloomington, as well as Illinois State University. In McLean County, where both schools are, the overall positivity rate had risen to 10.1%, according to an Aug. 30 report from public radio station WGLT. The report said two weeks into the semester, about 1,000 college students in the county, mostly from ISU, had tested positive since the fall semester began. "The big question now is whether the college surge will stay relatively contained near campus or spread out into the wider community, where students have part-time jobs, go shopping and eat out," the article read.

With Labor Day weekend ahead, the message at UIS is targeted at keeping students and faculty in line with best practices for a pandemic, namely good hygiene, social distance and wearing a mask. The latter two can prove difficult in the party situations holidays typically bring. A spokesperson for UIS said students will be encouraged to stay on campus over the break.

In-person learning is a privilege, said Whitney. There could be discipline for faculty and students who don't abide by rules. So far though, "I'm impressed with how conscientious people have been, how thoughtful they've been," Whitney said. "I'm very optimistic."

This story was updated and adapted from the print version due to breaking news about COVID-19 cases at UIUC.