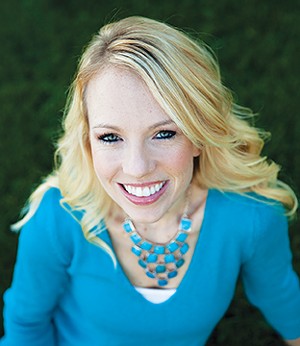 Not only thought of as our very own best local living author, Courtney Westlake is known as a popular storyteller across the nation and is a frequent contributor to major media outlets such as Huffington Post, NBC’s “The Today Show,” Yahoo Parenting and Good Housekeeping magazine. All this attention stems from her book, A Different Beautiful: Discovering and Celebrating Beauty in Places You Never Expected, becoming a sure, if unexpected, popular success after publication in 2016.

The genesis of the story began when her daughter Brenna, very soon after being born, was diagnosed with a rare and incurable genetic skin disorder known as Harlequin Ichthyosis. Courtney’s way of coping with the trauma and working through the issues involved in this peculiar condition led to the writing of A Different Beautiful. By using the power of words and the strength of her faith, she told the story of how she, along with her husband, Evan, and young son, Connor, struggled to discover a different way of understanding and managing the emotions from within and reactions from without.

Courtney initially began searching for comfort through a blog, putting down in words what was on her mind and sharing her personal experiences with Brenna. As she developed a following, the book soon followed and became a success on the basis of the compelling story, heartfelt writing and positive reflections.
In other related business, she is highly sought after for public speaking functions, produced an e-book called The Spaghetti Shot about taking photos of your children and has written That’s How You Know, a Christian children’s book that “reassures children of God’s never-ending love with a powerful message about how special each child is to God.”

Along with writing her regular website blog, she also keeps abreast of social media, a necessity for anyone these days trying to self-promote their artistic products. Courtney prefers Instagram (she’s at cwestlake) with over 26,000 followers checking her out and also does Facebook and Pinterest, for those of you wanting to know how to connect online with the “Best” author around.