Coroner would get separate building 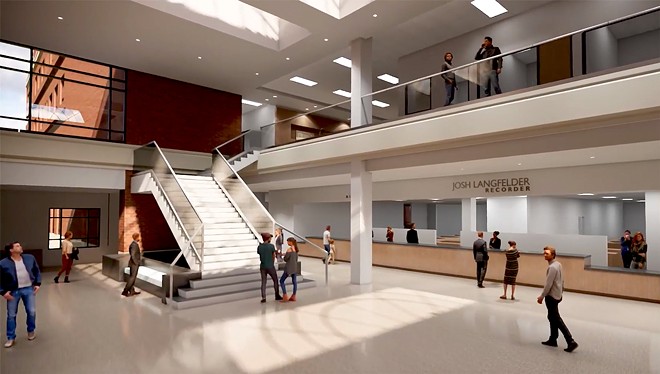 The planned Sangamon County courthouse renovation would feature a staircase and first-floor access to offices.

The Sangamon County courthouse is scheduled for a $16.7 million makeover that would transform the first and second floors and move the coroner's office into its own building on Dirksen Parkway.

The county board on Monday approved $278,000 for design work on the project, with construction expected to begin in November and conclude in the spring of 2023. A planned entrance atrium with a staircase leading to an upper level would replace cramped quarters at the current entrance, where courthouse visitors go through metal detectors no one envisioned when the building was constructed 30 years ago.

The public now isn't allowed in stairwells, which can result in crowded elevators and parties on opposing sides of legal matters standing next to each other. That can be a security concern, says Sheriff Jack Campbell. The recorder's office, treasurer's office and assessor's office will be on the first floor, along with the county clerk, plus a courtroom and an office for the circuit clerk where cases can be filed and traffic fines paid. County board offices will be on an upper level overlooking the atrium.

The entrance will be moved to the north side of the building, once a planned transit center for buses and trains is built as part of a railroad relocation project now underway that is expected to move trains from downtown to 10th Street by the end of 2025. A four-level parking ramp next to the center would provide parking for courthouse visitors.

The rail relocation project will displace the sheriff's evidence storage area. During a virtual presentation on the project last week, Campbell would not disclose the location of the planned new evidence storage area, citing security concerns. The county has budgeted $1.5 million. The same amount has been allocated for a standalone coroner's office and morgue on Dirksen Parkway, on county-owned property near a juvenile detention center.

The county never has owned a morgue. The planned facility would be accomplished with donations of equipment such as sinks and autopsy tables from Memorial Medical Center, where autopsies now are performed, says Sangamon County Coroner Jim Allmon. The facility, also, would be used to conduct autopsies for eight other central Illinois counties, he said, and would be similar to a morgue in Bloomington, where a forensic pathologist employed by McLean County conducts autopsies for several jurisdictions.

Dr. Nathaniel Patterson, the county's forensic pathologist who works for the coroner's office, performs about 200 autopsies each year for Sangamon County, Allmon says, and about 150 each year for other counties that pay him separately. The National Association of Medical Examiners recommends that pathologists perform no more than 250 autopsies each year. Allmon said that he is aware of the recommendation and is not concerned. The county would collect morgue fees from other jurisdictions that Allmon sets at $175 per autopsy, and the county no longer would have to pay the fee for autopsies now performed in morgues it doesn't own.

Talk of a regional morgue dates back years, including a decade ago, when a consultant recommended that Sangamon County keep an elected coroner's office rather than move to an appointed medical examiner, which the consultant determined would increase costs by $300,000 a year.

"It's been a long time coming," Allmon says. "I hope it happens. We're off to a good start."

The coroner's office now has vehicles parked at one location, equipment stored at another and office space at a different spot, with no place for bodies. The planned morgue would have room for 30 corpses, he said.

"We've operated out of at least five different locations," Allmon said. "Logistically, it's been a nightmare."