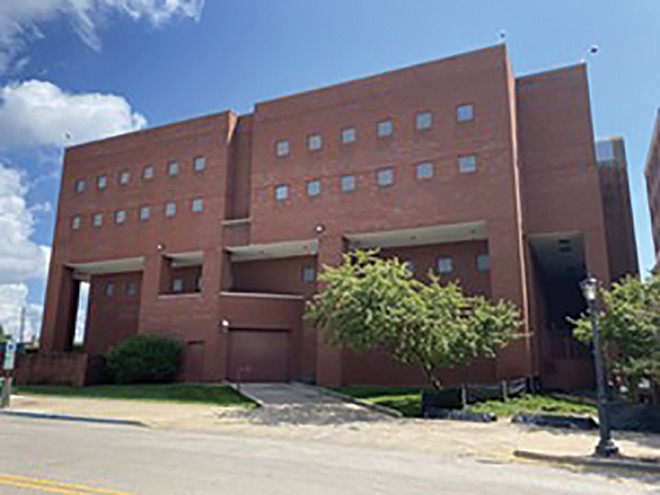 Photo by Dean Olsen
The north side of the Sangamon County Jail in Springfield.

Representatives of the Illinois Attorney General's Office initially said they planned to ask the Illinois Appellate Court to overturn the decision by Sangamon County Associate Judge Karen Tharp. The AG's office later decided not to appeal, but AG spokeswoman Jamey Dunn-Thomason, who confirmed the final decision in an Aug. 11 email to Illinois Times, didn't give a reason for the about-face.

Tharp granted the temporary restraining order requested by Sangamon County Sheriff Jack Campbell and five other downstate sheriffs – both Republicans and Democrats from the counties of McLean, Macon, Rock Island, Madison and Knox. The judge also denied the AG office's request that the sheriffs' lawsuit be dismissed.


Campbell and his fellow sheriffs are trying to get the Illinois Department of Human Services to reduce the months-long waits for jail inmates ruled unfit for trial to be admitted to state psychiatric facilities for treatment to restore their fitness.

The TRO doesn't impose any quick remedy to the admissions delays, which sheriffs say have gone on for years. DHS officials say the problem, rooted in a lack of treatment beds in state facilities, got worse during the COVID-19 pandemic because of COVID-related staff shortage and an increase in referrals.

But Tharp's ruling, for the time being, will stop DHS from relying on the July 6 executive order.

The ruling could bode well for sheriffs who hope the courts can force elected officials and policy-makers to move more quickly toward long-term solutions, according to Jim Kaitschuk, executive director of the Illinois Sheriffs' Association.

"The judge clearly understood the issues," he said. "It's an affirmation."

Sheriffs say the delays in transfers to DHS psychiatric hospitals such as McFarland Mental Health Center in Springfield put defendants at risk of mentally deteriorating even more in jail.

The delays also prevent crime victims from gaining timely resolution of cases, put both unfit inmates and jail personnel at increased risk of harm, and create unfunded costs for county jails ill-equipped to deal with mentally ill inmates, according to sheriffs.

Campbell said he was happy Tharp granted the TRO.

"The court recognized the mental health needs of these inmates," he said. "Those needs were the main reason for the lawsuit."

Pritzker's July 6 executive order was modified somewhat compared with previous orders the Democratic governor issued in response to the pandemic.

But the July order still allowed DHS to keep ignoring a 2018 state law that says the department must evaluate defendants deemed unfit, tell sheriffs within 20 days what facility each defendant shall be transported to, and then "promptly transport the defendant to the designated facility."

Tharp said in her written ruling that Pritzker's executive orders purportedly were based on the Illinois Emergency Management Act. The latest version, like the others, throws out the 20-day standard. The version also puts in place criteria under which Hou can prioritize admissions, including the "dangerousness of the defendant to themselves and others, their acute mental health needs, the likelihood of decompensation while those individuals are in jail, and the length of time the defendants have been waiting for admission to a DHS facility."

But Tharp said, "There is nothing about those criteria that is related in any way to coping with the COVID-19 pandemic."

She turned aside Assistant Attorney General Laura Bautista's argument that the 2018 law contains sections referring to bed availability and capacity issues, so the law doesn't set 20 days as a rigid deadline for transferring a defendant after being found unfit.

"Giving the words in the statute their ordinary meanings and considering the statute as a whole, the court finds that DHS has a mandatory duty to place unfit defendants in a DHS treatment facility within 20 days of a court order for placement," Tharp wrote.

She added: "The court is mindful that there is a staffing shortage at DHS facilities, but a lack of staff or a lack of bed space does not mean they can ignore their responsibility under the law. They cannot foist that responsibility onto someone else, and ultimately let unfit defendants and crime victims pay the price.

Attorney General Kwame Raoul's office had no immediate comment on the ruling.

Representatives of the sheriffs and the state plan to meet again in front of Tharp on Aug. 25 to discuss next steps in the case.

The lawsuit could lead to a trial later this year on the sheriffs' allegations that the delays should be remedied, regardless of a lack of staff and beds.

Editor's note: This story has been updated with comments from the Illinois Attorney General's Office on Aug. 11.