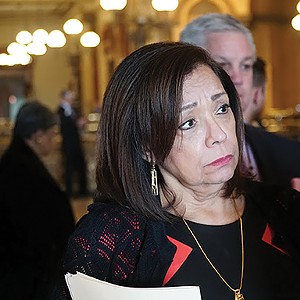 Photo by Lee Milner
Sen. Iris Martinez, D-Chicago, has sponsored a bill to commit at least $25 million of state funding to be used to assist in the collection of data for the 2020 Census.

Illinois could lose up to two of its congressional seats after the next U.S. Census count if the population decline is as bad as early estimates, but the scope of what the state stands to lose is much broader.

Federal funding for many programs, ranging from free breakfast for Illinois K-12 students, infrastructure needs for roadways and other necessary funding the state has been receiving, is also at stake.

“If we have an undercount, we will lose $1.2 billion over the next decade in Medicaid or similar programs,” said Kathie Kane-Willis, director of policy and advocacy for the Chicago Urban League. “This is not chump change.”

Sen. Iris Martinez, D-Chicago, has sponsored a bill in the Illinois Senate that would allocate $25 million in funding in an effort to provide grants to different agencies and organizations throughout the state to ensure every Illinois resident is counted, though she says  more funding to get the job done right would be ideal.

Martinez said she doesn’t know where the funding will come from, in light of the current state budget crunch that was exacerbated by the former governor, but says it’s a necessary expenditure because of what Illinois stands to lose. Illinois lost $122 million in health and human services funding for every 1% of the population not counted in the 2010 census, according to a 2018 report from the Illinois Complete Count Commission, established three years ago by Sen. Emil Jones, D-Chicago, to capture the populations missed in the 2010 census count.

In the 2010 census count, approximately 19% of households did not participate. The Census Bureau has identified minorities and those who live in rural communities as the groups least likely to respond to questionnaires. Additionally, Census Bureau data from the previous count determined children aged 5 and younger were also missed.

Forefront, a statewide association of nonprofit groups, hosted a workshop on April 3 in Springfield to train nonprofit organizations on how to assist in the census count. Most of the attendees at Forefront’s Census Summit work with some of the hard-to-count populations. With the push to get people to complete the 2020 Census questionnaire online, the task of filling out the questionnaires will be further complicated for some populations.

While lawmakers haven’t publicly addressed how to accomplish the count, aside from funding, Kane-Willis said some of the current strategies include turning libraries and governmental agencies into temporary census departments. However, she stressed the importance of building relationships to penetrate the distrust from within the hard-to-count community.

Shelly Heideman, executive director for the Faith Coalition for the Common Good, and Roy Williams, education task force chairman, represent one of the nonprofit organizations trying to address the distrust. The Faith Coalition for the Common Good recently received a $15,000 grant from Forefront to utilize their existing relationships with immigrant and low-income communities in Springfield, Decatur and Beardstown to educate targeted populations about the importance of responding to the census.

In Springfield, Heideman and Williams have already identified pockets of people, mostly low-income and African-American residents living on the east side, that were missed in the last census count.

“Forefront gave us data that shows a number of census tracts in Springfield and Decatur which were the most difficult census tracts to count in the nation,” Heideman said.

Williams said what makes this group so difficult to track is instability in living arrangements, which is often the case for people who live in poverty. “The traditional neighborhood around these census tracts is fluid. ‘This week I live with my girlfriend, but the next week she kicks me out,’” Williams said.

The pair said they’re confident that the organization’s approximately 50 volunteers will be able to count everyone, but both agree that the potential for a question about citizenship on the census, a legal question that will be heard by the U.S. Supreme Court later this month, could make counting undocumented immigrants more difficult.

If volunteers can’t convince these populations to participate, organizations seeking to help them will lose. Williams said that undercounting makes it difficult for nonprofit organizations to assist communities; they can’t receive funding for a person who doesn’t exist.

“If you have an accurate count of people, you are more likely to get funding and resources that are desperately needed,” said Erica Smith, executive director for Helping Hands of Springfield, a nonprofit that assists the homeless. “Helping Hands does rely on the state for the majority of our funding for our emergency shelter programming.”

Smith said the emergency shelter acts as a point of access for people who are without medical insurance and housing and connecting them to those services helps to save money. Smith plans to work with the Faith Coalition to help fill in the gap for the homeless population in Springfield, because she sees firsthand the importance of getting an accurate count.