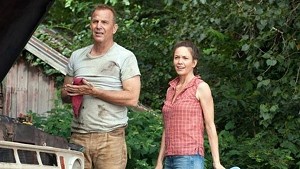 I was about halfway through Thomas Bezucha's Let Him Go when in my notes I wrote, "Let's see how this ends..." At that point, I had many mixed feelings about the film – many things I liked, yet there were almost as many that I didn't – and I knew that how I would ultimately feel about it would depend on the conclusion.

Go is a film that's right in my wheelhouse. It's a great looking modern period western, it has a compelling story and features solid performances from two screen veterans who are both instinctive film actors, able to convey much by doing little, their chemistry the backbone of the entire movie. But there's something missing here, as the main threat Bezucha employs in his adaptation of the novel by Larry Watson is dubious in construction and narratively thin.

The time is the early 1960s and the place is Montana, where retired lawman George Blackledge (Kevin Costner) lives on a modest ranch with his wife Margaret (Diane Lane). Their son James (Ryan Bruce), his wife Lorna (Kayli Carter) and their baby boy also reside there when tragedy strikes. An accident results in James' death, an incident that has unforeseen ramifications.

Jump ahead three years, the Blackledges are attending the wedding of Lorna to Donnie Weboy (Will Brittain), a man with a shady past and a dark temper. Without notice, the couple

move away, leaving Margaret heartbroken. Determined to see her grandson again and find out why the Weboys left so abruptly, she convinces George to help her track them down. With connections made during his years as a sheriff, this is easy enough, but what they find is unexpected. The Weboys, led by the harpy-like matriarch Blanche (Lesley Manville), have a reputation of being a violent, unreasonable family who don't let anything stand in the way of getting what they want. And when the Blackledges show up on their doorstep, see Lorna is being abused and say they want their grandson back, that just doesn't sit well with the clan.

What ensues is a fairly tense game of cat-and-mouse, the Blackledges trying to rescue Lorna and their grandson, the Weboys stopping them at every turn. And herein lies the problem – Who are the Weboys? Why are they allowed to run roughshod over the local police and populace? Why are they so intent on keeping Lorna and the boy when it's obvious they are tolerated and not loved? And just why is Blanche so damn hateful? Bezucha's deliberate pacing allow us ample time to turn these matters over in our minds, the problem growing much larger the longer this isn't addressed.

The feud between the family seems arbitrary, a conflict dictated by the needs of the script rather than narrative logic. Whether additional background about the Weboys is provided in Watson's novel, I don't know, but it's sorely needed here. Purpose is paramount for any character and that it's lacking makes for a less than satisfying film, one that skirts with being just an exercise in violence — and at one point sadism – and little else.

The chemistry between Costner and Lane is the main attraction here, the interactions between the two natural and unforced. You believe they've been married 40 years and are able to read one another at a glance, conversing without saying a word. Their nuanced, rich work keeps us engaged, hoping the story's climax will justify our investment. Unfortunately, that's not the case, as Let Him Go ultimately proves to be a missed opportunity that leaves us wanting more.