In setting the Jan. 12 date last week, Langfelder told reporters that’s when any spike in infections caused by holiday gatherings should subside. He also noted that Springfield School District 186 plans to resume some in-classroom instruction on that date.

In an email to city council members today, Langfelder did not state a date when restaurants will be allowed to restart indoor dining, but he suggested that Jan. 12 may not be firm.

“Once a decision is made by the (Sangamon County) Department of Public Health to resume indoor dining, with restrictions, the city will follow the same guidelines,” Langfelder wrote. “Since we are in the ninth month of dealing with the coronavirus and vaccinations are emerging, we will continue to allow indoor dining so there is no ‘yo-yo’ impact with closing and opening indoor dining.” The mayor did not immediately return a phone call seeking clarification on whether he has abandoned the Jan. 12 target date.

The mayor’s email and Van Meter’s comments came two days after authorities in Great Britain announced lockdown measures in response to a new strain of coronavirus said to be 70% more contagious than prior strains.

“Unfortunately, it was clear that there was a wave that was almost approaching a tidal wave of cases,” Dr. Donald Graham, an adviser to the Sangamon County Department of Public Health told Sam Madonia, a local radio host, this morning. “It just wasn’t possible to stay open because there were cases all over the place.” It was impossible, Graham said, to determine whether indoor dining with safeguards would be safe because too many people didn’t follow rules. “There were parameters to follow that weren’t being followed,” Graham told Madonia. “One of the key ones was separation of people when they came into the restaurant, staying six feet apart.”

Last week, Dr. Brian Miller, president of the county health board, told Madonia that the health department closed bars and ended indoor dining in November because authorities had no way of stopping private gatherings and hospital beds were filling up. “With the numbers being what they were, if we could just decrease that number by 10 or 15 percent – we needed to get through that eye of the needle, because it was tight,” Miller told Madonia. “By doing that, we possibly avoided a major catastrophe.”

“Every month has a holiday,” the doctor said. “I understand the logic of why the mayor picked the number of Jan. 12. But it was a date. We’re going to go by the numbers as opposed to the calendar.” 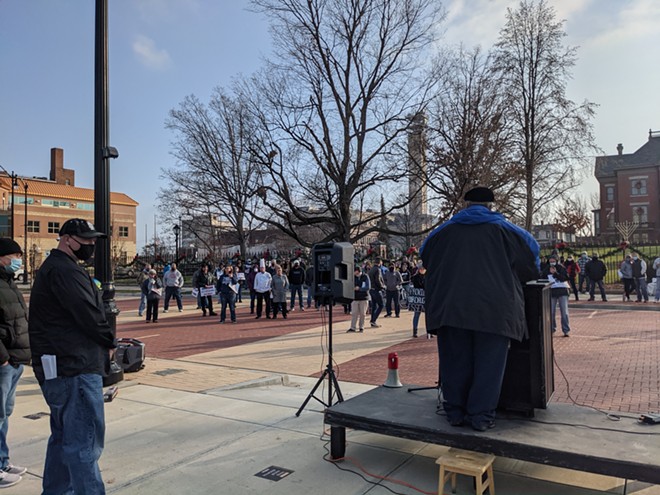 Photo by Bruce Rushton
About 100 people gathered Saturday outside the governor's mansion to protest state orders shutting down bars and restaurants.

Hanauer, who has criticized the city and county for acting on anonymous complaints against businesses that violate public health directives aimed at controlling the pandemic, downplayed the seriousness of violations and urged the crowd not to complain about businesses that break the rules.

"We're close to getting you guys open," Hanauer told the crowd. "We're close, but you've got to stay united. There are enough people working against you that are going around and turning people in for bogus rule violations — most of them, they're not even violations, they're turning you in because they see a couple cars  in the parking lot. But you guys have got to stay united and stop fighting with each other and turning people in.”

This story has been updated to include more complete remarks from Ward 10 Ald. Ralph Hanauer.