Langfelder: "They decided to work together, and that's what it's all about"

The Springfield police union is denouncing Mayor Jim Langfelder for defending Ward 2 Ald. Shawn Gregory, who got into a public fistfight Thursday, one day before the alderman, the mayor and other community leaders held a press conference to urge an end to violence in the capital city, which recently has been rocked by shootings.

Gregory, first contacted by Illinois Times on Thursday, has refused comment on the fight, which occurred alongside a public street and was captured on video. During Friday’s press conference, Sangamon County State’s Attorney Dan Wright would not say, when asked, how his office would handle a street fight captured on video that showed identities of participants. He also declined comment when asked how he would handle the Gregory matter.

“I can’t engage in commentary on hypotheticals or any specific set of facts,” Wright told reporters.

According to Don Edwards, president of Springfield Police Benevolent and Protective Association Unit No. 5, Gregory committed a crime.
click to enlarge 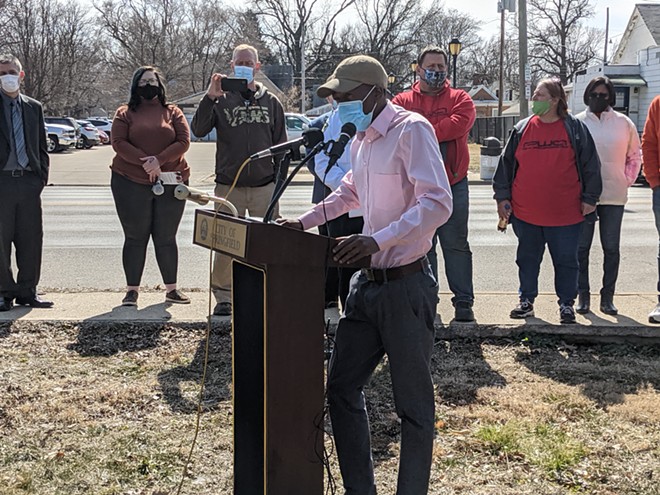 Photo by Bruce Rushton
Ward 2 Ald. Shawn Gregory speaks at an anti-violence press conference called one day after he engaged in fisticuffs.

“What took place was aggravated battery because it took place in a public way,” Edwards wrote in a letter to Langfelder. “This is a felony in Illinois, and there is no way one of our officers would not be held accountable if this had in fact happened to them.”

During Friday’s press conference, Langfelder defended Gregory, who spoke briefly at the podium, then departed the event held across the street from a recent mass shooting, one of several recent outbreaks of gunplay in the city.

“If Ald. Gregory was just a regular person, this wouldn’t be asked,” the mayor said. “The bottom line is, they settled it like I used to settle it when I was younger – you settled it physically. You didn’t resort to gun violence. … What happened afterwards was, they got together and they talked and listened to one another and they settled their differences. They decided to work together, and that’s what it’s all about. This could be exemplified as a way to solve your issues.”

The mayor did not say how he knew that Gregory and the other man had reconciled after fisticuffs.

In his letter to the mayor, Edwards said that officers who engage in similar behavior or smaller offenses are rightly punished, and he called on the city to hold Gregory accountable. He did not say just what the city should do.

“Elected officials should be held as accountable as any other person would be in similar circumstances,” the union president wrote. “Our officers are regularly called to fights in progress exactly like this one, and at times make arrests for such behavior. ...  Encouraging this behavior rather than denouncing it to the public through the media sends a message to our members and the public at large that it is acceptable behavior in the city of Springfield.”

Gregory received applause and hugs from people gathered behind the podium after his remarks at Friday’s anti-violence press conference. He alluded to the previous day's fight but did not elaborate.

“I know there’s many who will say ‘Why is Shawn here? Why should they have him speak?’” Gregory told reporters. “I want to apologize to my community for allowing a distraction of any kind to take away from the important work that I set out to do. The reason why I’m here is to send a message to our young people and young adults to not make a split-second decision that will cost you your life or make you lose everything that you’ve worked hard for.”

Here is a copy of Edwards' letter to Langfelder: