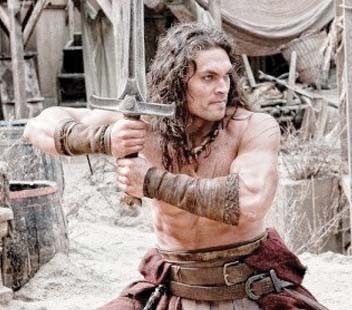 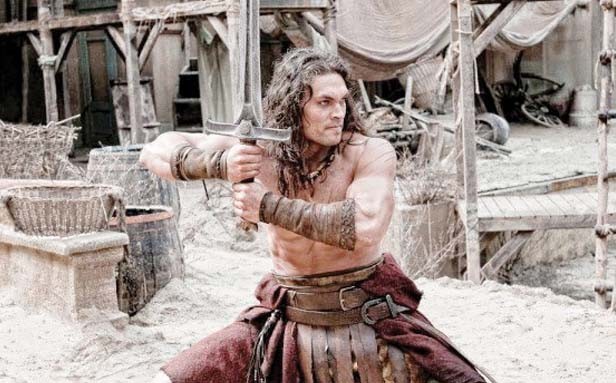 Jason Momoa in Conan the Barbarian.

Vicious, violent and vividly realized, director Marcus Nispel’s Conan the Barbarian is the film fans of Robert E. Howard’s pulp hero have been waiting for. Far better than John Milius’ sullen, and sometimes plodding take on the tale from 1982, this version is brutal, bloody and relentless, an attitude that mirrors its title character. The film contains an engaging adventure as well as a dynamic newcomer who may have some asking “Arnold who?” after seeing him in action.

Set during a mystical time in which warriors ruled the land and sorcery was a vital tool in holding on to power, the film takes place in Europe just before the Middle Ages where various barbarian tribes live under an uneasy truce. However, this all changes with the coming of Khalar Zym (Stephen Lang), a ruthless warrior intent on recovering a mystical mask that will give its owner vast power. Seems one of the pieces is in the settlement where Conan lives and when Zym finds the artifact he seeks, the warrior kills our hero’s father (Ron Perlman) and burns his village to the ground, stoking a burning sense of vengeance in the boy who vows to slay him. Years pass, Conan (Jason Momoa) fills out and he finally crosses paths with Zym, who’s searching for Tamara (Rachel Nichols), a resourceful woman whose blood will activate his mask. However, Conan finds her first, precipitating a series of battles between the two that get bloodier and broader as they go.

Nispel hits the ground running and gives us very few moments to catch our breath. From the first, during a rite of passage in which a young Conan handily dispatches four enemy warriors and proudly delivers their heads to his father, the director displays a flair for creating blood-soaked violence that, while visceral in nature, doesn’t seem gratuitous because it suits the material. Every death is bloody, yet all are done with the utmost taste, mind you.

Looking as if he stepped out of a Frank Frazetta painting, Momoa perfectly realizes the character, not just physically, but with the gleam in his eye when Conan is in his element. Watch him when he comes up with rather mischievous ways to kill two particular enemies and you can see the warped child who lurks behind the muscles, bent on vengeance. The film runs a bit long, yet Conan ends up being far better than expected. It adheres to the violent sensibility of Howard’s original stories and delivers a rousing tale with no apologies.