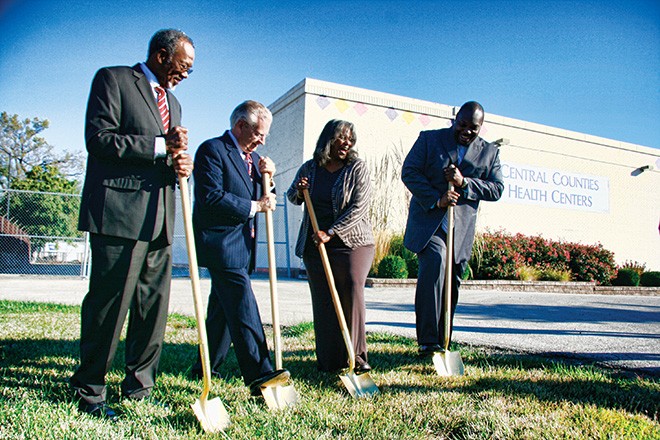 Central Counties Health Center on Wednesday hosted a groundbreaking ceremony next to its facility at 2239 E. Cook St. in Springfield. The clinic’s expansion project will add 14,000 square feet to the current 20,000-square-foot facility and is slated for completion in about a year.

CCHC, originally known as Health First, was created in 1995 by volunteers from the Sangamon County Medical Society and housed in the First Presbyterian Church in downtown Springfield. The organization grew quickly because of intense demand for services, moving to its current location in 2004. Today, CCHC serves more than 17,000 people in Sangamon and surrounding counties.

The organization has been planning the expansion for a few years, purchasing the vacant lot to the east of their facility to use as parking space because the expansion will fill part of the current parking space. The clinic will stay open during the expansion, offering services like prenatal care, school and sports physicals, women’s care, an STD clinic and dentistry.

Community health centers are a specific type of “federally qualified health center,” which means clinics like CCHC receive grants from the U.S. Department of Health and Human Services to provide primary care to underserved populations. The clinic is also partially funded by private donations and funds from United Way of Central Illinois.

Craig Glover, president and CEO of CCHC, says the clinic’s expansion adds more exam rooms, a community room and a full-service pharmacy to complement the existing discount drug program. The pharmacy will be run by Complete Care Pharmacy of Springfield.

“It allows us to meet the increasing demand for health care,” Glover said.

CCHC employs 11 physicians, a nurse practitioner, a certified nurse midwife, four dentists and two dental hygienists. The federal health insurance reforms known as the Patient Protection and Affordable Care Act (ACA), or simply “Obamacare,” allowed states to expand Medicaid coverage to people who earn up to 138 percent of the poverty level, which Glover said is expected to increase the number of people seeking health care. That may lead to CCHC hiring extra help, he said.

The clinic already offered qualifying patients help applying for Medicaid and similar programs, but with the implementation of the federal health insurance reforms, CCHC also began training staff to help patients select insurance from the state-run insurance exchange. The exchange, which launched Oct. 1, allows consumers to compare and purchase health insurance plans from private insurers, and state regulators ensure each plan on the exchange meets basic coverage standards. Glover said three staff members at CCHC are certified by the federal government to help patients use the exchange.

“We are excited to support the ACA, because as a provider of health care, we know firsthand the struggles that uninsured patients have,” Glover said.

Glover, who became president and CEO of CCHC in November 2011, likes his job because of the positive effect on the community.

“Every day we impact the lives of those in need,” he said.

Bobby Hall, chairman of the CCHC board of directors, says he first began using CCHC for his health care in 1998 after retiring from a job with the state. He says being on the board was a natural fit because of his dual interests in community involvement and health care.

“Doesn’t take people long to figure out we don’t look at them differently if they’re poor,” Hall said. “We try to make sure they get the best care anybody could possibly get. We’ve got a good connection with the community because people know we respect them and they respect us.”