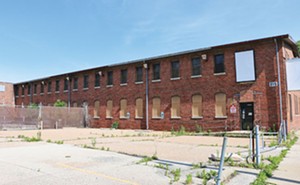 The project is so early in the planning stages that neither an artist’s rendering nor a solid budget exists. But if all goes well, the massive brick structure at 815 N. 11th St. that takes up the better part of a city block and was once a shoe factory would be converted into apartments for low-income people.

“There’s not much to say yet,” says Dulcinea Gillman, an architect who is designing the project and owns La Mancha Construction, a general contracting firm, based in Elmhurst. “We haven’t even gotten past the first hurdle in terms of funding. The ultimate owner would be a nonprofit.”

“We’re proposing 50 apartments along with a whole bunch of classrooms and offices and exercise rooms,” Gillman said. “It’s so early, we don’t know whether we’ll be invited to ask for funding (by IHDA).”

Sharon Durbin, president and chief executive officer of Land of Lincoln Goodwill Industries, says that she believes the building, the agency’s former headquarters, dates back to the 19th century and has been added onto over the years. Gillman, who grew up in Sherman, said that she’s admired the building since the 1980s, when she attended Williamsville High School and shopped at a Goodwill store that the building housed until 2013, when the charity closed all operations at the aging structure after years of unsuccessful marketing attempts.

“I’ve always loved this building,” Gillman says. “It has a lot of character, a lot of style. That kind of construction is precious.”

Gillman said that her professional interest was sparked in 2008, when she heard that Goodwill had contacted another architectural firm to assess the building.

A downturn in the economy complicated matters, Gillman said. In the meantime, she designed the 36-unit Hope Springs housing complex at 1135 N. Ninth St. for the mentally disabled, which opened in 2012. Gillman’s construction company built the complex that’s run by the Southern Illinois University School of Medicine.

“I don’t know if it’s because I’m from there, but about a year and a half ago, the city of Springfield contacted us and said, ‘We’re open to ideas for Goodwill – we really want to see if you can pull something together,’” Gillman says.

If funding comes through, the Goodwill project would be designed for “extremely low-income” people, Gillman says, including families. Construction could start in about a year at the earliest, she said. The 50 units would include 25 three-bedroom apartments, 13 two-bedroom apartments and a dozen one-bedroom units.

Rod Lane, executive director of Helping Hands of Springfield that battles homelessness, said talks with Gillman have been preliminary, but his agency stands ready to act as case manager for residents in 24 of the units. The need for affordable housing is critical, Lane said, with street counts of homeless people in Springfield higher than ever.

Goodwill has applied to the city for a rezone and a variance to allow the project. Gillman said that she wants to get all the required land-use matters resolved with the city in hopes of increasing the project’s chances for IHDA approval.

Lane said that he can’t promise people who live near the building that there would never be problems with residents if the project goes through.

“I’m not going to tell them everything’s going to be OK, but it sure as hell would be better than what they’ve got right now,” Lane said. “It (the building) is a trash heap.”

Durbin said that her agency would sell the building to the developer and ultimately lease space that would be used to house a job training program for the developmentally disabled as well as a career development program that would help the unemployed fill out online job applications and prepare for interviews. There would also be space for a mentoring program aimed at helping at-risk youth stay out of trouble, she said. Like Gillman, Durbin said the project has a long way to go.

“It’s at such an early stage with all this,” Durbin said. “All the deals haven’t been worked out.”