Cotton, Violins & Shots in the Night – A Timeline Visit to Rochester, Illinois By Raymond and Pamela Bruzan. 467 pages

If you live in Rochester, you should pick up this book. If you live in Springfield or another town nearby, you, too, should pick up this book. What a delightful trip through history with short vignettes of people and events, settlements and businesses, and yes, “cotton, violins, and shots in the night.” The stories behind the items listed in the book’s title are ones the Bruzans say they “want the reader to discover,” rather than divulging them quickly. Suffice it to say, the stories turn out to be fascinating and remind us that no matter where one grows up, fame and fortune are possible.

The book is divided into decades, starting in the pre-1800s. A timeline of major U.S., Illinois and Rochester events for the years in the decade opens each chapter. Followed by that are the decade’s “Storylines.” These are short, one- or two-paragraph accounts of what was happening in Rochester. These relate accidents and deaths, elections and disputes, businesses and developments, crimes and pranks, parties and brawls – the list goes on. Photos, many on each page, bring the stories alive. Maps help to identify locations of homesteads and businesses, even the site of Indian burial mounds. 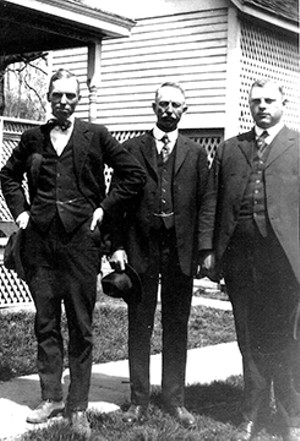 Photo courtesy of Terry Twist, Mike Twist, Jean Brickey, and Christine Cary
Rochester natives, from left, Clarence, Ira F. and Frank Twist moved to the tiny community of Twist, Arkansas, in the early 1900s. Together, they became the second largest cotton producers in the United States.

Raymond and Pam Bruzan have poured their hearts and souls into this compendium that is extensive in its research; a 72-page bibliography is proof of that. Pam says they had “stacks of information on houses” and people. Even since the publication of the book, people come by with items they have found, “and it all starts again,” Pam says. “We look through everything.”

One can get lost in this book, skipping around in the decades, or looking up a name or place. One story triggers an interest in another topic – or in a person – and the 29-page index helps in finding other interesting anecdotes to read.

Connections to Springfield and its people surface in the stories: Dona Herndon, the 26-year-old niece of William Herndon, Abraham Lincoln’s law partner, died after spilling burning kerosene on her clothes. And, readers will find that even in the 1870s there was scandal, as State Rep. Carter Tracy from Rochester was found drunk with his mistress. Many in Rochester worked in Springfield or contributed to the entire county. In fact, the very first apple trees in Sangamon County were planted in Rochester in the 1820s.

Dignitaries have visited Rochester over the decades. Former President Martin van Buren, visiting a relative in 1842, was forced to stay overnight due to the South Fork River rising too fast. Worried hosts wondered how to entertain their guest so asked Abraham Lincoln to cross the river, spend the night and spin his stories. Author Norman Mailer stayed with UIS Professor Mike Lennon and his wife in 1983; in 2013 Lennon wrote a biography of Mailer.

The book relates interesting stories and gives a sense of life in our past. Stories of people going after horse thieves in the 1870s and chicken thieves in the 1940s; some are funny, such as the woman who called her husband to come home because their pigs were eating the neighbor’s chickens. Students – and their parents – were either happy or mad when in 1884 the newspaper published each student’s grade average.

Ray Bruzan says all this interest in Rochester history started in 1971, when he and Pam bought their house in Rochester. While remodeling, he discovered a metal tintype under a floorboard – it was a picture of a man holding two children, one on each knee. Interest was piqued and led to the discovery that the man was Reverend T.B. Wright who had built the house in 1898.

During a summer internship in Beaufort, North Carolina, he heard of a walking house tour and that idea stuck with him for many years. With the work of the Rochester Historical Preservation Society, the Bruzans and others in the organization published the Orange Judd self-guided walking tour booklet in 2013. This booklet highlighted the original houses and businesses photographed by the Chicago Orange Judd company in 1918.
The Bruzans say this work drives them because it is so interesting. “We don’t do this for our own benefit but for the Rochester Historical Society.”

Even so, the Bruzans need to be applauded for their extensive work in fascinating us with the stories of Rochester. Cotton, Violins & Shots in the Night – A Timeline Visit to Rochester, Illinois will entertain all who pick it up.

Cinda Ackerman Klickna, former high school English teacher and immediate past president of the Illinois Education Association, lives in Rochester and loves hearing about the stories of the past.