The Lincolns had oyster parties in Springfield 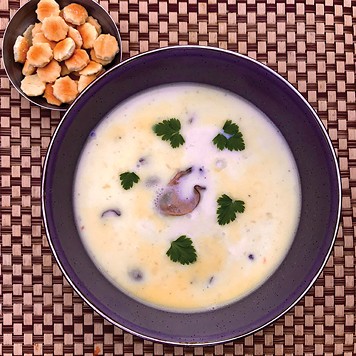 It would seem improbable that a soup made with highly perishable shellfish harvested from coastal waters would become a Christmas Eve tradition in the Midwest long before the advent of refrigerated transport. However, oyster stew, a simple preparation of oysters gently poached in milk and butter and seasoned with black pepper, has appeared on our holiday tables ever since the mid-1800s.

When the first English settlers arrived in the early 1600s, oysters were abundant in our coastal waters and served as a reliable protein source. Oyster shells found in archaeological excavations reveal that the bivalves were part of the Native American diet going back nearly 9,000 years.

The tradition of serving oyster stew on Christmas Eve originated with Irish immigrants, the vast majority of whom were Catholic. Eating meat the evening before a religious holiday was prohibited, and the Christmas Eve tradition in Ireland was to prepare a simple stew of dried ling fish, milk, butter and pepper. Ling, a type of Atlantic cod, was preserved by salting and drying. The dried fish was tenderized by cooking in milk with a knob of butter. When the Irish immigrants arrived in America, ling was not available, so oysters became a briny, chewy substitute for the traditional Irish Christmas Eve ling stew.

By the mid-1800s, oysters began making their way inland to the Midwest. Oysters have a relatively impervious shell and can survive quite a long time in cold weather or packed in ice. The trip from the coast to the Midwest could take days, and this is why fresh oysters were traditionally consumed in cooler months – the months containing the letter "R." According to an article published in American Heritage magazine, "Even before the railroad, great lumbering express wagons hauled live oysters hundreds of miles inland. An ambitious former congressman named Abraham Lincoln seems to have been admired locally for his oyster orgies, and the Lincolns several times threw parties at which huge quantities of the mollusks were eaten raw and subjected to every method of cookery then practiced in Springfield, Illinois."

In cold weather months, fresh oysters, packed in seaweed and wet straw, could survive the long trip to the Midwest. Far from the coast, oysters became a symbol of the arrival of the winter holiday season, appearing in the markets by Christmas Eve and on the tables that night as oyster stew. Midwesterners could order a barrel of fresh oysters the beginning of December and have them last all month, keeping them cold by simply putting them outdoors. By the 1840s, canning technology even made it possible for rural families without access to transportation hubs to have oysters for their Christmas Eve oyster stew.

Part of the reason for the oyster's popularity was its relative cheapness compared to other protein sources such as beef. In 1909 oysters cost half as much per pound as beef. By making oyster stew, thrifty cooks could stretch their oyster supply by poaching oysters and their briny liquor in a saucepan of warm milk seasoned with a knob of butter and a few grindings of black pepper. Oyster crackers are so named because they traditionally accompanied oyster stew.

This easy recipe is full of rich, wonderful seafood flavor. A family tradition, I've been enjoying this stew each Christmas Eve for as long as I can remember.

With a slotted spoon, place the oysters in a colander, reserving the liquor. Rinse the oysters well under cold water. Remove oysters to a bowl and set aside. Line the colander with a layer of cheesecloth, and with a bowl underneath, strain the oyster liquor to remove any grit.

In a saucepan, heat the milk and reserved oyster liquor just to the boiling point, but do not allow to boil. Whisk constantly to prevent scorching until mixture just begins to steam, about 3-4 minutes. Add the oysters and poach for about 4 to 5 minutes or until the edges of the oysters just begin to curl. Remove the pan from heat. Using a slotted spoon, transfer oysters to a plate to prevent them from overcooking.

Melt the butter in a large saucepan over medium heat. Add the shallot and garlic, and cook, stirring often, 4 minutes or until tender. Sprinkle flour over shallots and garlic, and cook, whisking constantly, until completely incorporated and bubbly, about 3 to 4 minutes. Gradually whisk in the half-and-half, sherry, Worcestershire sauce and celery salt.

Bring to a boil and add the milk mixture, stirring constantly. Reduce heat to medium-low and add the oysters. Cook until just warmed through. Season to taste with salt, pepper, lemon juice and hot sauce.

To serve, transfer oysters into four individual bowls with a slotted spoon, and ladle over the broth. Sprinkle with additional pepper. Garnish with parsley leaves. Serve with oyster crackers on the side. Note: Fresh oysters are preferable, but canned or jarred oysters can be used when fresh raw oysters are not available.

Peter and the Bertha Bus crew send greetings from Steinhatchee, Florida. After spending three lovely weeks of self-quarantine in the hills of southern Indiana, they have moved farther south to find warmer temperatures.