The rise of the Chicago city-state 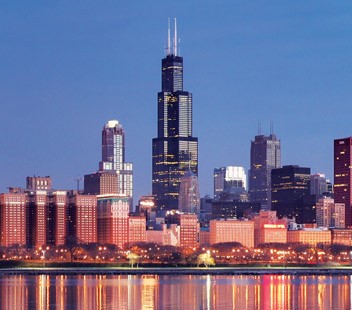 Yes, some Downstaters were cheered to learn that the City of Chicago, their ancient nemesis, lost some 200,000 residents during the Oughts. But while the City of Chicago is losing people, the Chicago metropolitan area is not. Metropolitan Chicago has grown into a key node in a massive urban agglomeration that stretches from Milwaukee to Detroit. Defined broadly, this “Chicagoland” is now home to nearly 10 million people in three states, and more than half the population of Illinois lives there now.

This new Chicagoland is best understood not as a single traditional central city and its suburbs but a new kind of city. For various reasons, the city is becoming more suburbanized and the suburbs more city-like in form, politics and habits. “Hometown” means less and less, since residents very often live, shop, work and get medical care in separate towns, and most  maintain some kind of relationship with Chicago proper. “Urbanization” and “suburbanization” are decreasingly useful terms to describe what is happening in northeast Illinois, which could be more accurately called “metropolitanization.”

Unfortunately, these 20th and 21st century trends have rendered many of Illinois’ 19th century government and political arrangements as outdated as horsecars or outhouses.

Transportation, trade and pollution flow across the old municipal, county and state lines, making it hard to manage any of them. Intelligent people have been arguing for more than century about how to manage this mess more efficiently and more equitably. A growing consensus of urban thinkers is that the ideal scale for the management of governance, infrastructure and land use in these new kinds of cities is the “megaregion” made of functionally overlapping metropolitan areas. Sensible as it is, the notion will never be implemented if it requires the voluntary compliance of the governments involved. The hundreds of local governments and service districts within the larger metropolis are fiercely independent and jealous of their local governmental autonomy. They also are inefficient and so jealous of their prerogatives that they can’t or won’t work with their neighbors to everyone’s ultimate advantage.

Facing the same kinds of problems in China’s manufacturing heartland around the Pearl River Delta, planners there have laid out an ambitious plan to integrate transport, energy, water and telecommunications networks into a more efficient whole by merging the region’s nine cities into a supercity comprising 16,000 square miles. That sounds huge, and is, but the Chicago metro area covers nearly 11,000 square miles.

All this matters to Downstaters as long as the political fortunes of Chicagoland and Downstate are linked. For 193 years the two regions have endured a bad marriage that only gets worse. The idea of seceding from Illinois is brought up from time to time in the city. It nearly got to the referendum stage in 1925, for example, so angry were Chicagoans at being bilked by farm interests in an egregiously malapportioned legislature – although these days it’s Downstaters who balk at being governed by the Chicagoans who occupy most of the statewide offices.

Chicagoland today has hugely more in common in every way with the megaregion of which it is a part than it does with the rest of Illinois. Attempting to govern it and Downstate under a single political system has arguably held each back from realizing a future appropriate to its needs. Chicagoland’s economy is so large that the region could stand on its own as an independent city-state.

The notion of redrawing state boundaries along more plausible economic, cultural and geographic lines is appealing.  I have written, in different settings, that southern Illinois should be attached to its natural mother, Kentucky, while Metro East becomes officially a part of the St. Louis metro area, the northernmost parts of Illinois faces a proud future as the southernmost parts of a new Wisconsin, and Illinois’s farming midsection is split between the Indiana and the Iowa that it resembles in so many ways.

Impossible? Chicago is only part of Illinois in the first place because the fix was put in in Congress by Nathaniel Pope, the first territorial secretary of Illinois. Making new states can be done (indeed has been done in the cases of Maine and West Virginia). All it takes is approval by Congress and the legislatures involved. True, Springfieldians would have to find a new city to blame for the new state’s ills, and Indianapolis is a much less convincing Gomorrah than Chicago. On the other hand, what more efficient way to downsize Illinois government than to eliminate Illinois?