Challenges abound in making The Irishman 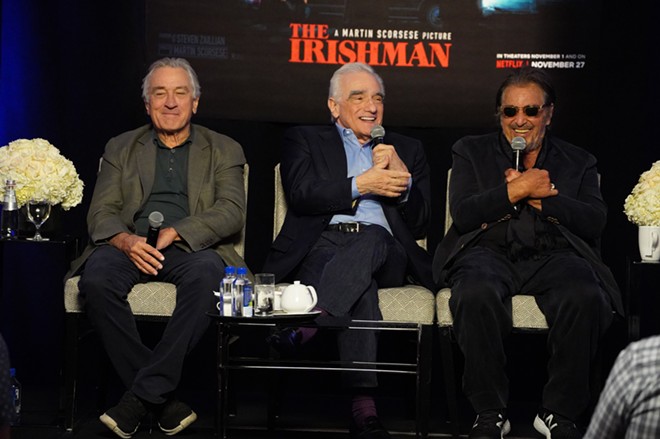 To say there's a mutual admiration society between Robert De Niro, Al Pacino and Martin Scorsese is something of an understatement. During a recent press conference in Hollywood after the premiere of their long-awaited film, The Irishman, it was obvious what high esteem these three have for one another. During their discussion, compliments flowed back and forth among the three, none of them disingenuous.

In addition, what was obvious was a sense of accomplishment and pride as the road to completion has been a long and arduous one where The Irishman is concerned. The film took over a decade to produce and required nearly two years of post-production work in order to employ a cutting-edge computer program that de-aged the actors as the story jumped back and forth over three decades. In many ways, this proved to be the most challenging part of the process.

"I think one of the key changes that we noticed on set really was the cameras themselves," recounted Scorsese about using this process. "The cameras had three lenses. And I was shooting two cameras a lot of the time, so we would have six lenses. And we had extra crew. And we were carrying nine cameras altogether because of other issues. And so, it became a pretty big operation, in a way. But the center lens was capturing the image. And there were lenses on either side that were dealing with the information coming from the computer from the markers on the actors' faces, which were developed in such ways that were almost invisible, which was great."

While getting used to the new equipment was relatively smooth, there were other aspects to making the actors seem younger than they are that weren't readily apparent, the most obvious one being having them move as they would at a given age. "Well, for me, the challenge would come pretty much every time I really moved in the thing," said Pacino with a laugh. "So, they would say, 'Al, you're 39.' And I would say, 'I know that.' And they would say, 'All right.' And then they would say, '39.' And then I would have to be in the scene and I would have to get up and it wasn't right. We had a guy there just come up to you and say, 'You're 39. You get up like a 39-year-old.' I could never do that scene. I can't get up like that."

For De Niro, the completion of The Irishman was something akin to paying a debt. "Well, Al and I have known each other over the years," the actor recalled. "We've known each other for decades, since we were in our 20s. And we worked a couple of times together. And with one project, Al and I were at an opening in Europe. I think it might have been London. And the people were so great and the crowd was enthusiastic. So, we said, one day, we hope that we would be deserving of this kind of adoration with something that we're more proud of. And I remember the last day of Al shooting on The Irishman, I said, 'Remember when we said that to each other that time?' And for nothing else, we did it in this movie and we are proud of it.

Lest someone think that Scorsese is covering much of the same ground he did in previous films, nothing could be further from the truth.

"Having gone through Mean Streets, Goodfellas and Casino, you know, I had covered the territory in specific ways at those times," the director said when asked about the similarities in the material. "The overall issue of corruption is something that I tend to be attracted to as material. And what happened with this was when I read the book it had this whole backdrop of the history of the United States. And it was just the matter of having to cut the whole thing down to its essentials and deal with the emotional impact, ultimately, of the life you lead. In terms of corruption, that's part of being a human being, the whole sense of that's part of who we are. And it's always there. The dark forces are always there. Do we succumb to them? All the time. Do we get sucked in and pulled back out? I mean, this is the whole thing. It has to do with our pride, too. In any event, it's more than corruption. It's about what's in ourselves as human beings."

The Irishman can be seen locally at the Avon Theater in Decatur on Friday, Nov. 22, and Saturday, Nov. 23, at 7 p.m. It will premiere on Netflix on Nov. 27. Look for a review of The Irishman in this space on Nov. 27.