The East St. Louis race riot of 1917, one of the worst in American history 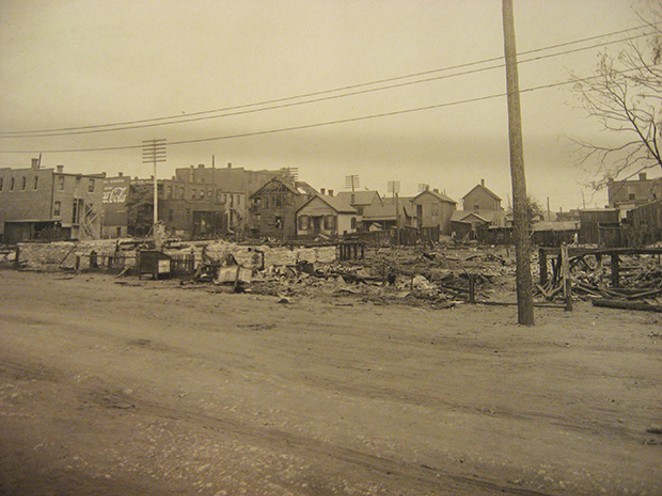 Prior to the riots, blacks had been moving north and seeking employment, increasing their populations in white-dominated cities, including East St. Louis. At the same time, World War I had cut off immigration which had supplied many factories with workers. Factories hired blacks instead. Adding to the tension, anti-black sentiment was being stoked around the country by D. W. Griffith’s film, Birth of A Nation, which exalted the KKK. It was re-released in St. Louis in February 1917.

In May that year, there was a violent episode in East St. Louis after labor strife at local factories when blacks were hired to replace fired union workers. A black man allegedly shot a white man. It was just a hint of things to come, however. The worst occurred July 2-3, after blacks killed two white policemen patrolling their neighborhood. The same night, whites had driven around there shooting at the homes of blacks. The story is the blacks thought the officers were the shooters and fired at them by mistake.

Then, the powder keg blew. A white mob attacked blacks with a gruesome vengeance. Rioters burned blacks’ homes and shot the residents as they fled. Ida B. Wells-Barnett, an African-American reformer for the Negro Fellowship League from Chicago, traveled to East St. Louis on July 4 to interview survivors. (Her report is online at http://gildedage.lib.niu.edu.) They described white rioters beating blacks on the streets and stealing from blacks’ homes before torching them.

One woman told of the mob beating her 18-year-old boarder with a brick, so he sought refuge in the home of some whites. When the mob threatened to burn the white family’s house if the black boy didn’t come out, the residents “threw him out in the street to the mob where he was kicked and stamped on and beaten till they knocked his teeth from his head and killed him.” Another survivor saw a woman flee a burning home with her baby but the mob shot the baby and threw it back into the burning home.

When some blacks sought safety in railroad cars, rioters burned the cars. Rioters lynched black men. Rioters pulled blacks off of streetcars and beat them. Many blacks fled across the bridge to St. Louis; some whites blocked their way. One black woman was decapitated on the so-called “Free Bridge” near 10th and Piggott Avenue, according to the East St. Louis 1917 Centennial Commission & Cultural Initiative. And so on. Many reports say police and militia gave the mob free reign, until July 3 when the Illinois National Guard finally intervened.

The official death count was 39 blacks and nine whites, which made it the most fatal riot in American history until the 1992 Los Angeles riot, according to Andrew Theising, an urban studies expert who authored a 2013 book about the East St. Louis riots, Made in USA, and teaches at Southern Illinois University Edwardsville. However, some historians think the East St. Louis deaths really totaled between 100 and 200. More than 300 black homes and businesses were burned. Up to 7,000 blacks left the city, though no one knows how many might have returned.

Why did this happen? Accounts vary.

Like Springfield of 1908, East St. Louis had a loose hold on laws within a mixed-race vice district that apparently operated with the support of city hall but angered law-abiding citizens, according to Race Riot at East St. Louis by Elliott Rudwick. Also like Springfield, prior to the riots East St. Louis had reports of real or exaggerated crimes committed by blacks. Some historians, including Rudwick, believe these factors, as well as job competition between whites and blacks, led to the riots.

Charles Lumpkins, author of the 2008 American Pogrom: The East St. Louis Race Riot and Black Politics and an assistant teaching professor of labor at Pennsylvania State University, believes the real issue wasn’t job competition or crime, but politics. Blacks were “on their way” to becoming a powerful voting bloc, he said in an interview. They had helped elect the city’s mayor and were “demanding favors” for doing so. “Various black leaders in East St. Louis realized that the black population was increasing and they saw a chance to build a black political machine, where they could say, ‘We want our share of the power.’ I call the riot a pogrom because it was a politicized race riot. It wasn’t really race. It was politics.”

Those who had power wanted to keep it. In his 2008 book, Never Been a Time: The 1917 Race Riot that Sparked the Civil Rights Movement, Harper Barnes writes: “In an atmosphere of racial and economic fear, whites and blacks had been pitted against one another by the purposeful acts of wealthy and powerful whites. It was the work not just of industrialists but of politicians as well, ranging from the Democratic mayor of East St. Louis, to the president of the United States, Woodrow Wilson, who used ‘Southern Strategy’ in his bitterly fought re-election campaign in the fall of 1916 that increased the division between black and white in the region that included East St. Louis.”

“There is no simple answer” to the cause of East St. Louis’ riots, said Theising in an interview. “The core problem is racism…. Employment trouble was the trigger that launched the riot, but people went right to violence. It’s the propensity to act out in violence around these racial attitudes that is the height of the problem.”

A congressional investigation into the riots blamed city leaders, police, the Illinois National Guard, local unions and companies for racism, lawlessness, and corruption. Only a few involved with the riots were sentenced; the majority were black. “Blacks were charged with murder and whites were charged with rioting and those carried very different sentences. The sentences for rioting were shorter,” says Theising.
After the riots, East St. Louis changed its form of government to lessen blacks’ political power, according to Lumpkins. “(Blacks) never got their political machine, but they did build a vibrant community culturally and socially, (and) spiritually in the aftermath of the pogrom.”

A century later, East St. Louis is still deeply flawed, Theising adds: “I would say East St. Louis is perhaps one of the worst cities in the country by just about any measure, economically or socially. The people of East St. Louis are kind and hopeful and loving and there is good happening at the street level. However, they face gigantic, intractable problems of poverty, crime and economic collapse.”

He is a member of the East St. Louis 1917 Centennial Commission & Cultural Initiative, which held a variety of events in East St. Louis and the area this year to commemorate the anniversary of the riots. Next year, the commission hopes to develop curriculum materials about the riots for schools, continue holding tours of riot sites, and erect a small monument to victims by July 2, the 101st anniversary. “There is a larger vision for a larger monument, more along the lines of what is in Springfield,” he says, referring to the Preston Jackson sculpture commemorating our 1908 riots that sits in Union Park, across from the Abraham Lincoln Presidential Museum. In the long term, there’s even hope to build a museum about the East St. Louis riots, but “that’s far down the road.”

Tara McClellan McAndrew is an award-winning Springfield writer, author of Stories of Springfield: Life in Lincoln’s Town, and playwright who specializes in stories about history. One day she’d like to write a play about Springfield’s race riots.