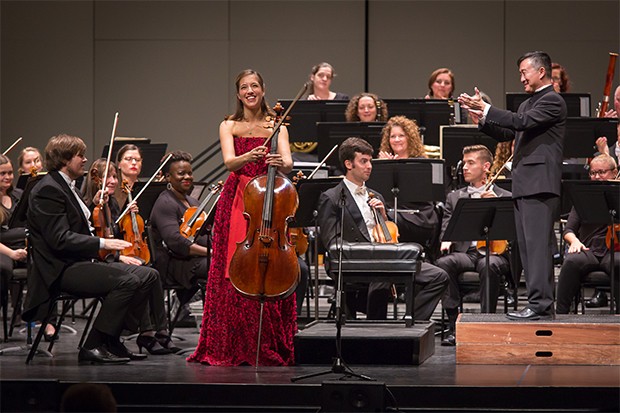 The Illinois Symphony Orchestra began its 2019-2020 season with “Beautiful and Bold” at the UIS Performing Arts Center on Saturday, Oct. 19. After a rousing rendition of “The Star Spangled Banner,” the concert proper got underway with Wagner’s “Forest Murmurs” (drawn from the opera Siegfried, part of the Ring of the Nibelungen cycle). Typical of the pacing and structure of recent ISO concerts, the short, mellifluous, pastoral piece – which acts as a sort of break in the action within the overall heroic Siegfried narrative – acted as something of an aperitif before the main course, showcasing the excellent musicians of the orchestra and providing a counterpoint to the intricacies and resplendence in store.
Internationally acclaimed guest cellist Camille Thomas dominated the remainder of the concert’s first section, joining the orchestra for Edward Elgar’s 1919 “Cello Concerto.” Thomas’ physicality and emotional intensity combined with her seemingly effortless virtuosity for a riveting, memorable performance. Elgar’s piece requires a delicately coordinated dance between ensemble and soloist, ably managed by music director Ken Lam, who for the length of the composition often seemed as much intermediary between Thomas and the orchestra as conventional conductor. The results were lovely and deeply impressive.

After a standing ovation, the 31-year-old Thomas returned to the stage for an unaccompanied rendition of “Song of the Birds” by Catalonian composer and cellist Pablo Casals, which she dedicated to the late, legendary British cellist Jacqueline du Pre, who, Thomas informed the audience, had died 32 years ago that weekend at the age of 28, from complications of multiple sclerosis.

The second half of the show consisted of the ISO’s rendition of “Symphony No. 5” (1808) by Ludwig van Beethoven, perhaps the best known and most frequently performed composition in the entire classical canon. Lam shared some thoughts about “Number Five” with the audience before beginning to play it, including a recounting of the celebrated piece’s debut, conducted by the composer, wherein the immortal symphony was apparently stuck on the end of an overstuffed bill in a Viennese theater during the winter of 1808, to a crowd likely more interested in staying warm than paying attention to music.

Tonight’s performance, in contrast, was received on a temperate Midwestern autumn evening by a rapt and appreciative audience. The familiar strains of the first movement’s iconic four note (dum-dum-dum-DUM) motif filled the air and the auditorium was transported to a transcendent realm where, for a time, the inspiration of the long-departed, deaf and despondent but defiant Beethoven reached to us across the centuries. It was a fitting start to this new season of music from the ISO.

Fans of movie music will not want to miss the special “Heroes & Villains” concert on Saturday, Nov. 16, featuring the ISO’s takes on themes from films like Star Wars¸ Jaws, The Avengers and the Harry Potter series. The next regular concert will be “Amazing Alleluias” (Dec. 6), which will feature works by Mozart, Haydn and Vivaldi and special guest, soprano Awet Andemicael. 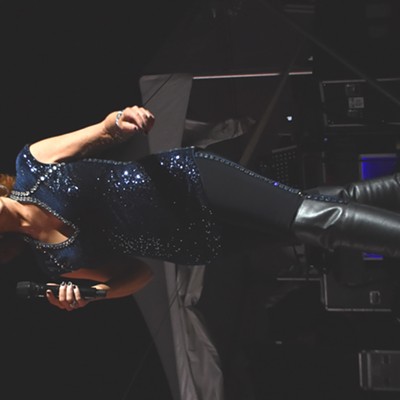